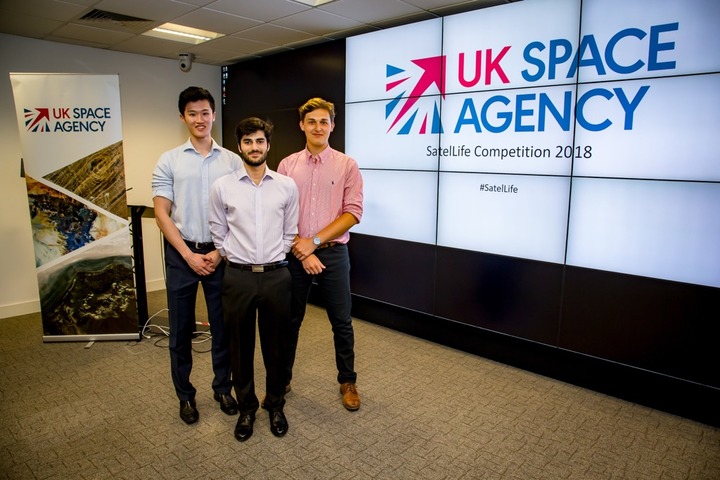 The MEDeus team at the UKSA SatelLife competition in 2018.

Medical students who won UK Space Agency funding to develop a drone that delivers medical supplies to emergencies and remote areas are flying high after help from the AMRC in creating concept designs for the unmanned aircraft.

Schoolboy friends and current medical students, Thomas Franchi (University of Sheffield), Hammad Jeilani and Chris Law (both Barts and The London School of Medicine and Dentistry), set up the company MEDeus to create their drone and medical box system, MEDrone and MEDiBox respectively.

The two systems are used together to deliver medical items between GP services, hospitals and NHS Trusts in rural and congested city locations and for a range of situations – from blood samples and emergency medical equipment such as defibrillators, to life-saving organ transplant transit.

MEDeus asked the AMRC’s Design and Prototyping Group (DPG) for CAD and early-stage graphical design assistance for the drone. They worked with Samuel Rees, Senior Project Engineer at the DPG, and Principal Engineer Garth Nicholson, who built on the research provided by MEDeus to produce a series of still images that could be collated in a ‘storyboard’ format to illustrate the drone’s potential applications.

Samuel said: “Prior to us helping they had a document which explained the problems they were trying to overcome and the solutions they had developed. It had a few diagrams in it but overall the document was very wordy.

“They were concerned their idea was being ‘lost’ in the document and that it didn’t have the visual impact or tell the story in a particularly compelling way; they were presenting lots of text that didn’t necessarily engage people’s enthusiasm and imagination.

“They also had a technical problem they needed the AMRC to solve as they had envisaged a quadcopter as the type of drone they wanted to use, so we worked through some concept designs we thought would best suit the applications proposed for the MEDrone.” The main challenge was to have a drone that can travel over long distances efficiently and economically and then be able to land easily in what could be close quarters with buildings or in difficult situations.

To do this Samuel and Garth came up with an innovative solution that incorporated the fans into the tandem wings.

Samuel said: “It took a few different concepts to get there and it brings together a few different ideas: a tandem wing design with the fans within the wings which allows a principle called ‘blown wing’ to occur so you have forced airflow over a wing and that generates its own lift.

“This design also has vectoring fans; they can rotate between pointing downwards or pointing backwards so you can have vertical flight, operating like a quadcopter, and land in a really tight spot in what might be difficult wind conditions as they are relatively stable in that way. It can then transition from vertical flight to horizontal flight and with that you have the advantages of the wings working like a regular plane.

“MEDeus had envisaged using a quadcopter for their drone design but for travelling long distances it is a bit of a non-starter because it’s really inefficient. They are quite good at lifting but not very efficient for moving sideways whereas something like this design - where you have got a streamlined body, streamlined wings and using the wing lift to give it the lift and the fans to push it forward – it can fly fast and quite efficiently, allowing it to travel those long distances required.

“We have built quadcopters and they are a known technology, but what is less certain is where the fans point straight backwards – that’s new. There have been tandem wing aircraft where the fans were on the tips of the wing but they are not within the wings –– we are effectively trying out something new here so we need to see if that works.

“The next stage would be to develop a prototype. The physics of this model need to be understood properly first and a prototype designed around that. Then it would be a case of test it and fly it.” The UK space industry is a lucrative market and huge success story for the UK, supporting 38,000 jobs and generating some £14 billion in revenue across the country – and with help from the AMRC, the medical students are making good progress turning their ideas into reality.

Furthermore, they’re working at the Westcott Business Incubation Centre to build their business case and are collaborating with NIHR MedTech Cooperatives.

Thomas, Hammad and Chris, who went to school together at Dulwich College and have been friends for almost a decade, said: “We have always had a strong interest in engineering and through this project we’re combining our knowledge and skills in medicine and public health issues with our technical mind-sets to develop a meaningful and impactful service model.

“We approached the AMRC as it was evident they are the experts in design and prototyping. Having read about previous projects, we knew they had the capabilities we needed,” said Thomas. “Our experience of working with the team went far beyond our expectations, and everyone involved put in 110 per cent to help and guide us through the process.

“We've used the designs and storyboards created to easily and quickly portray our proposal; something which was a real challenge to do without this visual display. We're extremely grateful to the AMRC for giving us this five-day SME assist, and hope to continue working alongside the AMRC as we progress.”