AM nanosatellite fuel tank design could be ‘game changer’ 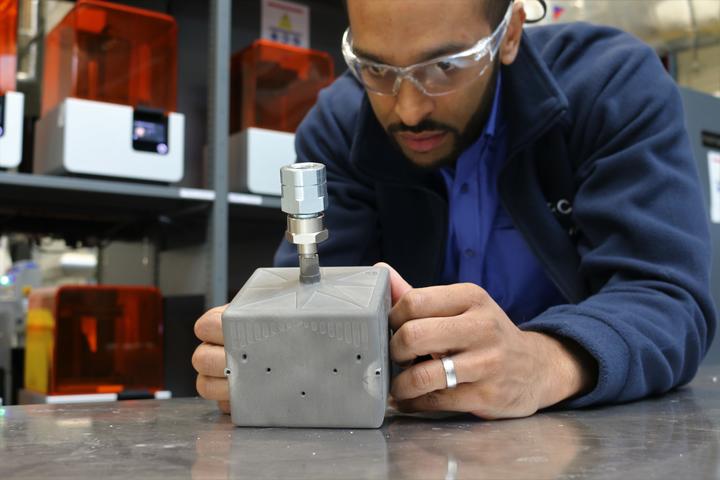 Abdul Haque, technical lead in metal additive manufacturing at the University of Sheffield AMRC, inspecting one of the AM fuel tank prototypes.

A lightweight fuel tank for small-scale satellites has been designed and developed by metal additive manufacture engineers at the University of Sheffield Advanced Manufacturing Research Centre (AMRC) as part of a pioneering UK Space Agency-funded programme.

With the annual number of small satellites deployed forecast to reach about 400 this year – an increase of 300 per cent compared to 2016 – there is a growing market need to dramatically expand their mission capabilities, extend their orbital life and decrease the cost of constellation deployment.

AMRC engineers used topology optimization techniques to reduce the weight of the tank by over 25 per cent, combined with an almost three-fold increase in fuel capacity over conventional spheroidal storage tanks.  This could have a significant impact on satellite launch costs.

MiniTANK is a collaborative endeavour between the AMRC and global SME technology company Added Value Solutions (AVS) UK Ltd. to develop a propellant storage system for a nanosatellite that maximises the internal volume whilst minimising mass – utilising novel features that can only be manufactured through Additive Manufacturing (AM).

Backed by the UK Space Agency’s Pathfinder programme, AMRC researchers have produced a lightweight, high-strength fuel tank for a Cube Satellite (CubeSat for short) that meets the demanding performance and cost targets desired by Oxford-based AVS, a company that designs propulsion systems for small-scale satellites.

AVS chose to work with the AMRC’s Design and Prototyping Group (DPG) because of its leading expertise and experience in designing AM parts. In return, MiniTANK has given the AMRC an invaluable foothold in the UK space industry and provides a significant new offering to current and future industrial partners.

“Using a pressurised tank without the AMRC’s work on AM optimisation would have forced us to choose between a heavy design or a volume inefficient tank holding much less propellant in CubeSats,” says Daniel Staab, system engineer at AVS UK.

Kyaw Swar, the liaising mechanical engineer from AVS UK, added: “This project has allowed us to understand much better the requirements and objectives of AM in the Cubesat market, which is crucial for other developments around mechanisms and optomechanical systems for small satellites that we are involved in.

“We even see great knowledge transfer skills that are beneficial for high-value missions, such as our involvement in the development of the gripper and sample restraint mechanisms of the Sample Fetching Rover where additive manufactured parts will most likely be part of the mission.”

Abdul says MiniTANK has successfully demonstrated that metal AM is an alternative route for the manufacture of complex fuel tank designs.

“The final AM fuel tank mass was 360 g which was a 28 per cent decrease in weight when compared to the original dry mass of 500 g for a conventional tank,” he said.

We were able to demonstrate the successful application of AM to achieve performance benefits of a component, the geometry of which is not possible to produce through conventional manufacturing methods.

“The volume utilisation (amount of usable space within the tank) of the cuboidal fuel tank was estimated at 90 per cent which is an improvement when compared with spherical tanks at approximately 60 per cent. The fuel tank can hold approximately 2.8 times the fuel volume of a 78 mm diameter sphere, which is the largest size sphere that could fit within the allocated design envelope.

“During testing, the fuel tank withstood all non-destructive tests without observable deformation. The fuel tank ruptured at a test pressure of 74 bar, which is 1.9 times the safety factor of the design burst pressure specified in the European Cooperation for Space Standardisation (ECSS).

“We were able to demonstrate the successful application of AM to achieve performance benefits of a component, the geometry of which is not possible to produce through conventional manufacturing methods.”

Current nanosatellite and microsatellite propellant storage systems either use volume-inefficient but structurally strong cylindrical and spherical tanks. This means there is much interest in the development of fuel tanks, currently one of the heaviest components of a CubeSat’s propulsion system.

AMRC engineers were able to produce a viable satellite fuel tank optimised through generative design techniques to meet weight, strength and volumetric fuel storage requirements. Using AM to produce a freeform generatively designed geometry, DPG researchers successfully applied a novel design approach to create a cuboidal fuel tank that would give AVS a competitive edge in the marketplace.

Abdul said the purpose of the MiniTANK project was twofold: first to show it is possible to design an improved fuel tank but also demonstrate what can be achieved by using the AM process to do this.

“Typically CubeSats are used for technology and research so can be a contributor to some sort of telecommunications research, large-scale monitoring - so science-focused programmes. Essentially they collect data or do some sort of monitoring or provide platforms for telecommunications. They can do anything, it depends on how they are configured and what the end requirement is.”

He said heritage propulsion systems are expensive and do not scale well to the small size and/or power budgets available on nanosatellite and microsatellite platforms. AVS provided the DPG with a set of technical requirements for a CubeSat fuel tank. These included: a single propellant line with inner and outer diameters of 2 mm and 3 mm; fitting within an envelope of approximately 96 mm x 96 mm x 78 mm; achieving a propellant volume of 0.6 litres; and having a dry mass of less than 500 g.

“With AM you can create complex forms that you can’t manufacture via conventional methods. The concept we generated was a cuboidal fuel tank.

“Through the concept developments we did in-house, using software tools such as Altair Inspire, Autodesk Netfabb Simulation and PTC Creo Simulate, we were able to assess the design space and identify areas for optimisation; for example where material from low-stress areas could be moved and placed in high-stress regions where more material is required.

“By moving away from a sphere to a cube immediately allowed us to increase the amount of propellant stored in the tank, the volume utilisation was increased from 60 per cent to 90 per cent.

“As you would expect a sphere to be structurally stronger than a cube, we used topology optimisation tools to optimise the design, which suggested using a stiffening geometry to resolve some anticipated distortion.

“We did this by creating a series of rib structures on the inside of the cuboidal tank to resist the high displacement or high-stress regions predicted by the software these were designed in such a way as to be self-supporting. This allowed us to build the tank in a single piece, eliminating the requirement for joining multiple components post-build as there was no need to remove build-supports for the internal structures of the fuel tank.” For space, although we’re talking a matter of grams, such a weight saving is hugely significant. If you can shave one kilogram off your launch load, it can be potentially £7,000 to £15,000 in terms of cost-saving off the launch.

Laser Powder Bed Fusion (LPBF) was used for the fuel tank manufacture; this is where a fibre laser is used to impart thermal energy selectively to fuse regions of fine metallic particles to form a Near Net Shape (NNS) component. It is also known as Selective Laser Melting (SLM) and is capable of creating highly complex geometries with features not possible through subtractive manufacturing processes.

Abdul added: “We printed the fuel tank out of titanium because it allows us to create a lightweight structure as its specific strength is high compared to other alloys. The original cuboidal tank without any mass optimisation via 3D printing techniques tank that was given in the specification was around 500 g and we managed to redesign that cuboidal tank into a highly mass optimised tank – and even with internal stiffening structures the final weight came out at 360 g.

“For space, although we’re talking a matter of grams, such a weight saving is hugely significant. If you can shave one kilogram off your launch load, it can be potentially £7,000 to £15,000 in terms of cost-saving off the launch.

“What AVS is working towards now is designing a CubeSat propulsion system potentially using the fuel tank that we’ve 3D printed and are developing several other components that need to be amalgamated into the whole system. They want to print some further iterations of the fuel tank in the future and do some actual launch tests.”

MiniTANK has a wider impact too, as Abdul explained: “Although this project focused on the fuel tank – if you take a system-level approach and carry out the same optimisation to other components of the CubeSat – the microwave generator housing, the propulsion system, brackets that connect solar panels, the framework – you are shaving weight off every assembly component. In total that might save a lot more material, so MiniTANK is not an isolated case, we should be looking at the entire satellite system to get the maximum benefits offered by AM.”