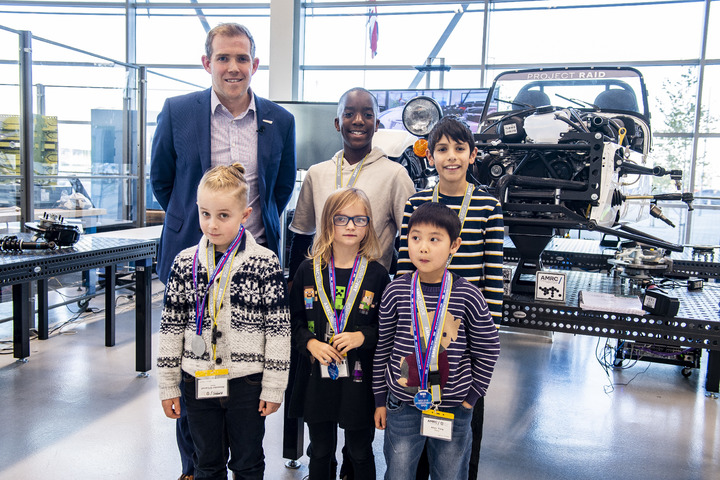 Ben Morgan, from IMG, gives the good news to the Sheffield to Shanghai team at Factory 2050.

The AMRC has stepped in to help a group of talented whizz kids who have won a place in the finals of the World Educational Robot (WER) Contest in Shanghai next month – making them the first to represent the UK in the world finals.

The University of Sheffield Advanced Manufacturing Research Centre (AMRC) is sponsoring the team to make the dream trip possible, but the parents still require additional financial support to help make the trip a success for all the families (click here to show your support). The children –Alex O’Carroll, Allen Yang, Sofia Armitage, all seven-years-old, and Jacob Sibanda, 12, and Kirin Harrington, 11, - were given the good news on Wednesday during a special visit to the AMRC’s flagship Factory 2050 facility, home to the Integrated Manufacturing Group.

Ben Morgan, head of IMG, welcomed the children to the factory, telling them how they are the ‘engineers of the future’ and their interest in robotics is inspirational.

He said the AMRC has been following their story closely and wanted to help them with their quest to reach Shanghai. “You will be ambassadors in China for the Sheffield City Region, spreading the word that this is the place to come for engineering and industrial digital technology. We’re delighted to be able to sponsor such a talented team of young people from the region’s schools, and to show the world that engineering and our region has very bright future if we work together.

“The team at the AMRC and the University of Sheffield – and I think the whole of Sheffield and Yorkshire – wish you well and all the best in the competition and we’re sure you will have fun. We are doing our bit to help make that happen, it would fabulous if others could show their support too.” As part of the visit the children enjoyed a fun Virtual Reality experience playing games and completing engineering tasks; they played ‘splat-a-rat’ using advanced LED pick and place kitting technology; and were given special memento to take with them – a 3D-printed jet engine with the words ‘Sheffield to Shanghai’ on it and the AMRC logo. Young Alex O’Carroll, who attends St Peter’s Primary in Tankersley, Barnsley, said it had been ‘the best day ever’ and wanted to come back ‘again and again’.

He said it was amazing they could now go to Shanghai with the help of the AMRC and loved the 3D printed engine saying: “This is the most precious thing as there are only five in the world. I can’t believe they were made for us.”

His mum, Liz O’Carroll, of High Green, was blown away by the donation. She said: “This is a truly amazing opportunity for them that we never imagined they would get at such a young age.

“Not only will it give them the chance to complete against the best in the world but the opportunity to see what the world has to offer them in the future; the cultural experience alone will be amazing. It also shows the world that the UK is on the map in fostering young STEM talent and this could be the springboard to greater things. As parents we can't believe the generosity of the AMRC has shown towards the kids - it truly is fantastic.” She said the visit to Factory 2050 was such a treat for the kids - and parents.

“To see so much futuristic technology really gave the kids a taste of what they could be involved in if they carry on with their STEM work. The guys at 2050 planned the day so well with loads of interactive activities for the kids to engage in. They all really enjoyed the AR and VR experience and probably will be fancying getting the technologies at home.

“An awesome experience from and awesome team.” The children secured their places in Shanghai after scoring high at a WER competition held at Sheffield University in July, where they competed against 50 UK children and 50 of the best robotics students on a visit from China to build a robot and programme it to complete certain tasks.

The teams, brought together by the Discovery STEM Education organisation based at Kelham Island in Sheffield, will now pit their wits against some of the world’s brightest young minds as more than 500,000 four to 18-year-olds from 69 countries gather to compete at the robot engineering and coding contest. Dr Melissa Butt is from Discovery, which runs after-school clubs, holiday workshops and other activities in a bid to get more children interested in science, technology, engineering and maths, and nurture their talent. It is supporting eight schools across Sheffield to be able to train their students for the next contest in July 2019, as well as training 60 children at its own centre.

Melissa said: “The UK has a shortage of individuals entering important STEM careers. Those young people that have shown not only enthusiasm but also the commitment to develop their STEM skills must be afforded further opportunity.

“Alex, Sofia, Allen, Jacob and Kirin were amongst the 50 UK children competing alongside 50 of the highest achieving Chinese children at Sheffield University in the first UK World Educational Robotic Contest in the summer of 2018.

“This will be the first time that the UK has been represented in this industry related robot engineering and coding contest. The finalists worked incredibly hard at training sessions leading up to the UK contest and are now working hard preparing for the finals at their weekly training sessions.

“The AMRC and Rolls-Royce are committed to supporting the next generation of STEM professionals. The AMRC has also provided a hugely exciting opportunity for the teams to glimpse the future of robotics in UK industry.

“Without the generous sponsorship our bright young UK finalists would not have been able to compete at the world WER contest final in Shanghai. We’re extremely grateful to them for making this dream come true.”

The Sheffield to Shanghai team's visit to Factory 2050 featured on ITV Calendar news.