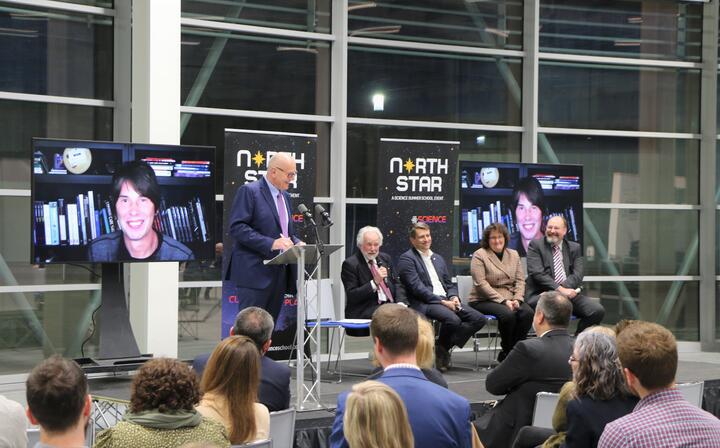 “Inspiring children early to pursue industry and science is very important – but so is the follow up process and the steps they need to take to get there.” That was the bold message from physicist and TV astronomer Professor Brian Cox CBE to an audience gathered at the University of Sheffield Advanced Manufacturing Research Centre (AMRC) as part of the North Star Science School event encouraging more young people to take up careers in science and engineering.

Prof Cox was beamed in virtually to the AMRC’s Factory 2050 facility where he addressed business industry and community leaders, urging them to share views and explore how to deepen partnerships and bring together the public, business and social sectors to increase and level-up opportunities within the science, technology, engineering, arts and maths sectors (STEAM) across South Yorkshire.

North Star, part of the national Science Summer School initiative, was co-founded by Prof Cox and entrepreneur Lord Andrew Mawson OBE, who was also present at the evening celebration; they share the ethos that talent can be found everywhere, and any child can succeed if the right way is found for them early on to inspire and nurture their talent.

The evening’s panel discussions followed on from a full day of activities celebrating STEAM at Gulliver’s Valley Theme Park in Rotherham, organised by The Work-wise Foundation in association with Well North Enterprises – where around 600 students from schools across the region undertook a series of hands-on, interactive workshops and heard from a range of inspiring speakers, including Prof Cox.

During his keynote speech on the night, Prof Cox touched on messages he told youngsters at Gulliver’s just hours before, centred around stars, galaxies, and the dangers our Earth faces due to climate change.

He told them that Earth was potentially unique and how humanity could be the only trace of civilisation in the Milky Way galaxy. “To put it bluntly, if we mess this up (Earth), we eliminate intelligence in a galaxy forever,” added Prof Cox.

Julie Dalton, managing director of Gulliver’s spoke of her aspiration to inspire children from as young as five to consider STEAM careers, adding: “I believe children learn from experience, not what they learn in a classroom. We’ve just had a bid approved to create a skills city – to put youngsters in a role-play environment to inspire them, but for this to work, it has to be collaborative.”

Prof Cox added that bridges need to be built earlier in a child’s life to get them interested in science and engineering and to achieve this better links are needed with schools and parents and creating stronger relationships.

Lord Mawson emphasised that the event can also act as a catalyst to bring key stakeholders together around place-making, education, health, business, public, voluntary and community sectors.

He said: “Yes, we need more young people to get into science and engineering, but we also need to help them to learn the right skills for the exciting range of careers on offer.  It’s also about making their experience real, joining the dots to transform culture and aspiration and create pathways into work”.

Lord Mawson cited an example of creating a practical innovation platform through the Barratt Developments PLC and Ibstock PLC partnership brokered by Science Summer School, which will build an initial 20 zero carbon homes on the Waverley site, adjacent to the AMRC.

Local secondary school students will be involved with this project as it travels from drawing board through foundation-digging to building real homes with new technologies requiring new skills.

“The technologies and skills we need for the future don’t necessarily exist yet,” he added. “The traditional engineers we have now won’t be here for the future. We need to re-invent and re-define what an engineer is and give them the skills they need to help tackle the problems of the future.”

Prof Cox ended the night by saying how much excitement this year’s event had brought and that he was immensely looking forward to attending next year’s North Star in person.

Pressing ahead with rehab revolution
28/04/2021
A physiotherapist’s medical innovation that could transform the rehabilitation …
AMRC strengthens links with Korea following new agreement on collaboration
13/10/2015
The University of Sheffield is to set up a branch of its Advanced Manufacturing Resea …
Prepare to take-off at the AMRC
05/10/2016
An aviation spectacular will be landing at the University of Sheffield Advanced Manuf …
Pryor joins AMRC to showcase part traceability and data capture in smart factories
08/02/2019
World leading marking, identification and traceability specialist Pryor Marking Techn …