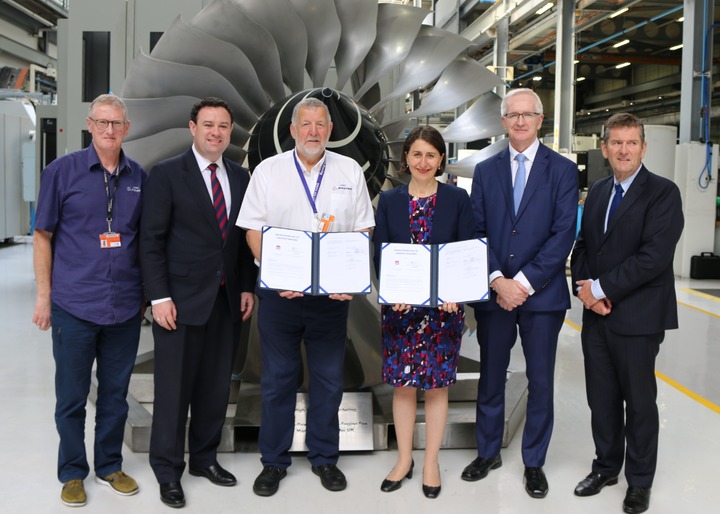 The leaders of an audacious £20 billion transformation plan for Australia’s third largest regional economy have teamed up with the University of Sheffield’s Advanced Manufacturing Research Centre (AMRC) to build a high value added manufacturing district connected to an emerging Aerotropolis around the new Western Sydney airport.

The Premier of New South Wales, Gladys Berejiklian, and members of her Cabinet, flew in to the UK this week to sign a ‘foundation status’ Memorandum of Understanding with the founder and Executive Dean of the AMRC, Professor Keith Ridgway, which will enable the Australian authorities to learn from the AMRC’s experience in using R&D talent and technical skills to transform a region that seemed blighted to post-industrial decline.

Premier Berejiklian said: “We want to mimic the brilliance of the AMRC model to allow companies to work together with our finest research brains and to allow the young people of Western Sydney to access STEM education in their own backyard.” During her high-level tour of the AMRC’s Rotherham and Sheffield campus she made a special point of talking to a group of apprentices at the AMRC Training Centre, as upskilling the workforce is vital to Western Sydney’s goal of creating the 200,000 new jobs.

She said: “Sheffield has gone from a place that was really distraught after the coal industry and in just 15 years has built up a research and development capacity that is now central to the UK’s economic success story.

“Not only is the AMRC providing a research and development capacity with 125 partners of key industries across the globe but they’re also performing that special opportunity through apprenticeships and university to really qualify those individuals, especially young people, to get those jobs for the future.

“It was fantastic speaking to apprentices who have gone on to get engineering degrees and are providing R&D support and working in industries really at the cutting edge of technology.

“Western Sydney will become the advanced manufacturing hub – not just for New South Wales but for Australia.

This is nation-building stuff and I’m so proud that we have been able to secure this relationship to ensure we have the University of Sheffield AMRC really holding our hand through this process; not only ensuring we replicate this success in Western Sydney but actually add to it.

“This is nation-building stuff and I’m so proud that we have been able to secure this relationship to ensure we have the University of Sheffield AMRC really holding our hand through this process; not only ensuring we replicate this success in Western Sydney but actually add to it.”

Professor Ridgway said: “It’s been an honour to show the Premier around our research facilities and to meet our apprentices, who are our proudest achievement. We are delighted to be invited to help her team turn their vision for a Western Sydney Aerotropolis into a reality.

“This is also a massive opportunity for the Sheffield City Region to learn and benefit from the partnership with New South Wales, as this inspirational project takes wings. Her visit is testimony to the fact that the AMRC has become a global brand with a reputation for economic and social transformation driven by high value-added skills and serious R&D engineering talent.” Stuart Ayres MP, Minister for Jobs, Investment, Tourism and Western Sydney, described the AMRC facility as ‘world-class’ and wanted to be able to deliver the same for Western Sydney.

“Our vision for Western Sydney is about making an advanced manufacturing and innovation capital, not just for New South Wales but for all of Australia and what we see here is a region a long way away from London actually changing the way the workforce is developed into the future.

“This very precinct here is training young men and women, often at the age of 16 and 17, to be the workers of the future to make sure the economy here in the United Kingdom stays strong and they continue to build things; and that’s something that’s very important to us in Western Sydney.

“There’s a lot of lessons to be learned here.”

The architects of the new city are keen to explore the idea of how a manufacturing skills academy based on the AMRC Training Centre model could support training at all levels including craft and technician apprenticeships, degree apprenticeships, postgraduate training and continued professional development.

“We have learned that vocational and apprentice training is more accessible if delivered at the local level thus a skills academy could act as a hub connecting with spokes at strategic sites networked across the state,” said Professor Ridgway.

Premier Berejiklian said. “Over the next decade, Western Sydney will be transformed into a world-leading agglomeration of science, technology and education. We are bringing together the best knowledge available globally to help build a new city that will create jobs and skills for future generations with the amenities that will be required to meet the expectations of a growing population.”

Looking round the AMRC Training Centre – built on what was once the site of the Battle of Orgreave between striking coal miners and the police in the mid-1980s – the Premier remarked on the scale of the transformation. “Forty years ago, this region was a declining wasteland of 19th-century industry, so the transition from old to new, in creating jobs of the future is incredible to see,” she said. “This partnership is another commitment by the NSW Government to the creation of high-quality education and jobs in the Science, Technology, Engineering and Mathematics (STEM) field for young people in Sydney’s West.” A recent report by the University of Western Sydney notes that the region has higher than average unemployment and lower than average salary levels. Western Sydney is home to 1.9 million people of which 35% were born overseas. The population is projected to reach 3 million by 2036 and to absorb two thirds of the population growth in the Sydney region. It is one of the largest growing urban populations in Australia.

Many people first settling in Australia choose Western Sydney and over the past decade 50% of those settling in Western Sydney were from Iraq and Sudan. Western Sydney has a high proportion of low income families and high school retention rates for years 7 to 12 are the lowest in the Sydney metropolitan area.

“Western Sydney shares similar aspirations to many other regions worldwide–  to regenerate the economy through a combination of inward investment and indigenous organic growth,” says Ridgway. “There is a realisation around the world that and growing and maintaining high value manufacturing sector is a key enabler for generating sustainable, well-paid jobs and a thriving community and a balanced economy.”

“The vision is a thriving community based on a cluster of high value manufacturing companies and their supply chains co-locating with research, education and training establishments that can meet their future innovation and training needs.”

£1.25m project will advance wind turbine blade production
25/04/2022
The University of Sheffield Advanced Manufacturing Research Centre (AMRC) is working …
Praise for the “Sheffield Process”
21/07/2017
The AMRC is making a direct a contribution to the transformation of the national econ …
AMRC will allow North Wales to fulfil its economic ambition
11/10/2021
The Advanced Manufacturing Research Centre (AMRC) Cymru will raise productivity in th …
AMRC prepares to go ultrasonic with arrival of new composite machine tool
05/09/2018
The world's largest ultrasonic assisted machine tool is coming to the University of S …