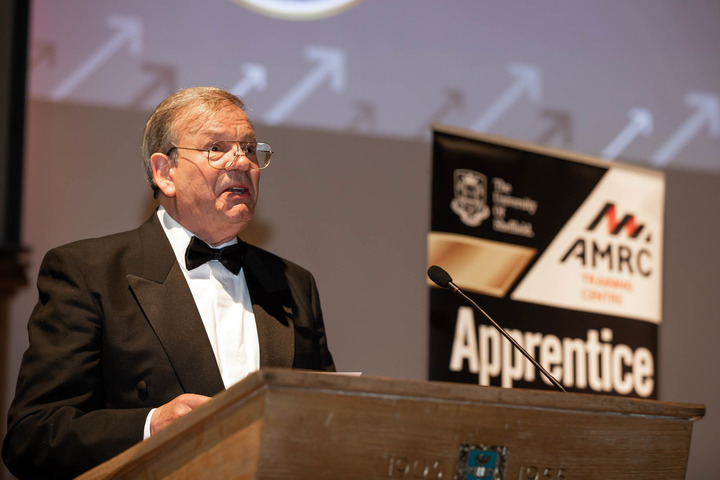 Dr Graham Siddall, the Sheffield-born engineer and a multi-millionaire backer of the AMRC Training Centre’s Apprentice of the Year awards.

“What is happening at Orgreave is truly remarkable,” said retired Silicon Valley CEO, Dr Graham Siddall, shortly before presenting a personal gift – a biography of Stanford’s Fred Terman and a founding spirit of Silicon Valley – to one of the AMRC’s founders, Executive Dean, Professor Keith Ridgway.

Graham, who grew up in poverty in Attercliffe in the 1950s, had played in the shadows of the hulking Orgreave coking plant that dominated the landscape as a small boy. Long since demolished, and renamed Waverley, the site of the plant is the birthplace of the AMRC, whose first building received a Royal opening in 2004.

“Remarkable things like this only happen when remarkable people make them happen. And Keith Ridgway is such a person. Many universities have brilliant academics doing great research. But few have academics with the entrepreneurial and leadership skills to make things happen on this scale.” One such university was Stanford, where Graham went as a post-doctoral researcher on the NASA Gravity Probe B project, which used ultra-precise gyroscopes housed in a satellite to test Einstein's theory of General Relativity.

Until shortly before the Second World War, Stanford had been a sleepy, provincial university town. All that changed, however, with the arrival of Fred Terman, a Professor of Electrical Engineering, who created the world’s first university-owned industrial park. He encouraged two of his graduate students, William Hewlett and David Packard, to form a company and house it close to campus. Other high-value, research-based companies soon followed.

The seeds of Silicon Valley had been sown. “Fred understood that modern universities should be more than ivory towers. He realised you had to connect research, industry and government to create what he called ‘steeples of excellence’ and laid the ground for what was to become a global phenomenon, home to ground-breaking companies such as Google and Facebook,” said Graham.

He told his audience that, when reading the Terman biography recently, he kept thinking about Keith and the AMRC. “The parallels are uncanny. What you have at the AMRC is a California-style can-do culture; it’s a place where you can dream the impossible dream. And the training centre is opening up undreamt of possibilities and futures for young people from the same backgrounds as mine.” Graham told how he would spend much of his spare time at Attercliffe Public Library – like the coking plant, long since gone –- where he learned how to make a primitive telescope using basic materials fitted into a cardboard tube and mounted on top of a dustbin. “It was crude but I was delighted to see craters on the Moon and some of the satellites of Jupiter.”

Less than 15 years’ later, as part of the Gravity Probe-B project, Graham found himself ferrying a sophisticated quartz star-tracking telescope up to the world renowned Lick Observatory on Mount Hamilton, east of San Jose in California.

“The weather was poor, so on the first night I sat talking with some of the world’s leading astronomical researchers until the sun came up over the Sierras and started illuminating the Pacific Ocean.  I thought about the young boy in Attercliffe with the cardboard telescope mounted on the bin lid, and felt like I’d died and gone to heaven!” he said. Over the last five years he has turned his telescope homewards and watched with fascination and delight at the growth of the AMRC. “Some places only ever look back, but the AMRC is always looking to the future. Factory 2050, which I have visited, is a wonderful facility with an even better name: it points to the possibilities to come rather than looks back on what has already happened.”

Asked after the award’s ceremony about the future, Graham was clear. “This is just the beginning, we have to grow and expand the training centre and the AMRC; with the Keith’s leadership and his entrepreneurial culture, Sheffield – my hometown – has a bright future. A future that continues to build those steeples of excellence.”