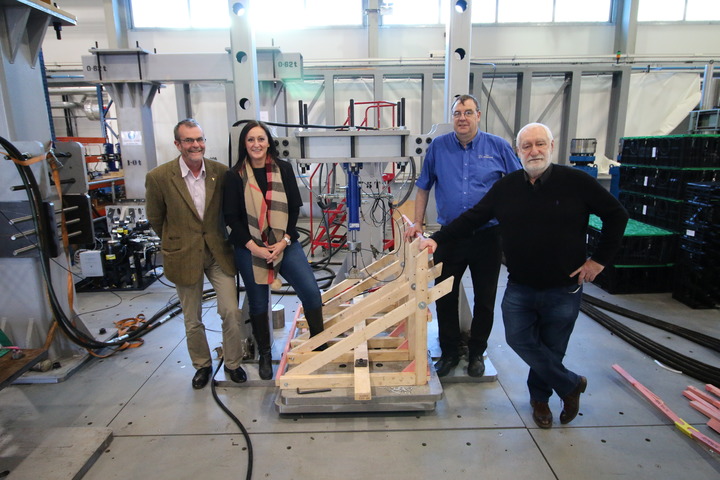 L-R: Head of the ASTC at the AMRC, Phil Spiers, KEAH General Manager Emma Johnson, AMRC Technical Lead for Structural Testing Shane Smith and KEAH Director Ken Johnson with the KEAH roofing structure installed for testing in the Tall Rig at the AMRC.

A retired builder-turned-entrepreneur has invented and patented a brand new method of joining roof battens which will not only improve construction safety, but make a roof quicker and easier to assemble than the traditional method.

The KEAH Roof Batten Joints have been tested and verified for use at the University of Sheffield Advanced Manufacturing Research Centre’s (AMRC) Advanced Structural Testing Centre (ASTC) after KEAH director Ken Johnson chose to work with the team there due to their ability to create bespoke testing systems and procedures at the UKAS accredited facility.

Ken Johnson, from Leeds, who is 70 years old, has spent the majority of his career as a builder and developer in the construction industry. After retiring from his construction businesses, he felt driven to put his own ideas formulated through his vast wealth of experience on building sites, into action to improve construction processes.

Ken created a new company, KEAH, to bring those ideas to life starting with the innovative Plastic Pipe Chamfer and now the ground-breaking new roofing aid which is completely manufactured in Yorkshire.

The Roof Batten Joint is a plastic injection-moulded, push-fit ‘joint’ to easily connect horizontal wooden roof battens at any point along a roof structure, instead of needing to trim them to size and nail them to the vertical roofing spas.

“After working in construction all my life and having first-hand experience of the issues that can cause delays and cost resources on site, I thought there must be a smarter way to complete those time-consuming intensive manual jobs,” said Ken Johnson.

“The KEAH Roof Batten Joint can join two roof battens at any point on the roof which will save time and material waste. The joints make felting and lathing a roof quicker, but also safer and stronger than the usual methods as they eliminate weakening of the roof structure from trimming and patching battens that can lead to split batten ends and joint failure,” he added.

Phil Spiers, Head of the ASTC, said: “KEAH constructed a roofing model that fits perfectly into our Tall Rig. The rig was developed during project work with Sheffield-based Gripple UK, and has the capability to conduct longer and more accurate tests for a variety of purposes.

“We applied loads to the KEAH joints using the rig until failure of the roof batten, noted the mode of failure and the maximum load achieved just prior to failure. Compared to the traditional joint the KEAH joints were capable of carrying an extra 10 stone on average.

“Our tests have so far shown that the joints are stronger than traditional nailed roof batten fixtures and experience lower rates of failure. We have validated that the optimum load weight for use is 20 stone, but the joints can support all the way up to 50 stone in weight.”

“The idea for the product itself is beautifully simple, but it is a powerful concept that will make a laborious task safer.” added Phil Spiers.

KEAH have already developed the product through a series of prototypes and have been working closely with national construction and roofing companies to ensure the product meets the needs of those keen to get their hands on the new technology.

The company benefited from SME grant funding through the High Value Manufacturing Catapult to pay up to 50 per cent of the costs for the testing, which Ken Johnson explained is a huge step for the company:

“For a small company such as ours, it really helps us get this pioneering roofing product off the ground. The testing is invaluable as it means we will now be able to approach our potential end users and confidently state the load bearing weights of our product and that the joints are ready to go into production thanks to the AMRC.”