ACS Stainless switches on to virtual reality for factory planning 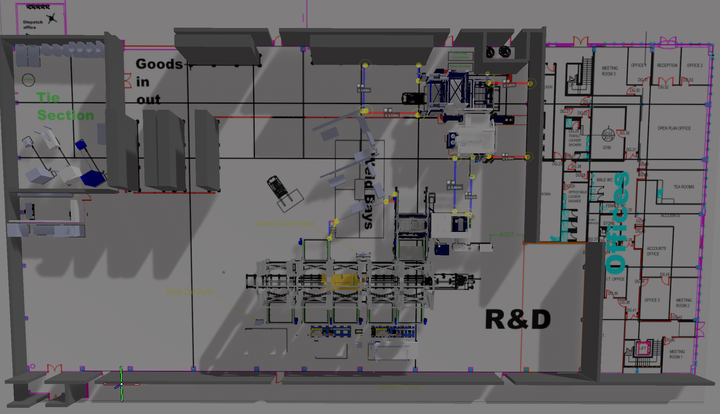 With just weeks to go before vital components were installed in their new factory building, Leeds-based ACS Stainless called on Virtual Reality (VR) research experts at the AMRC to build them a three-dimensional ‘carbon copy’ of the proposed layout for its staff to ‘see’ what their new workplace would look like and provide feedback before installation.

Jake Senior, Digital Software Engineer at the AMRC’s Integrated Manufacturing Group, led on the VR project with ACS Stainless who had heard of our skills in this field through our pioneering work with Yorkshire Water where researchers were able to ‘construct’ a virtual treatment works.

“ACS were just weeks away from starting to get all the components installed at the new building and were fitting in a number of very large machines which meant they only had one opportunity to get everything in the right place,” said Jake.

“The approached us as they wanted to be able to validate the layout of the equipment in a visual and contextual manner as architectural drawings and 3D models are good to a point, but lack a sense of scale and space, and some of their new pieces of equipment were over eight meters high. We managed to do this using VR in a relatively short time frame.

“We used a piece of software called Visionary Render to import the CAD files of the machines being installed which allowed us to put them in the right place by overlaying architectural drawings onto the floor plan of all the different components.”

This created a virtual world that allowed ACS Stainless staff to walk around a digital representation of their new factory using a HTC Vive headset. David Flannery, managing director at ACS Stainless, said: “As with most construction projects there were numerous changes to the internal layout of the building as the design developed. Some were of our own making, but others were dictated by the various contractors that we employed on the project.

“Much of the equipment we have installed in our new facility is bespoke and involved machine suppliers and contractors working together for the first time. Therefore many of the challenges of altering machines layouts and the consequences were not immediately obvious.”

As all of the items were to scale, it meant ACS Stainless staff could get a true feel for what the layout would look like and meant they could make changes such as moving machines away from walls, checking there was enough space between machines for forklift access and behind machines for maintenance purposes.

As a result it was possible to include an important stairwell that hadn’t originally been planned for and some alterations were made to welding bays.

Jake said: “We took a mobile VR kit to the offices and did a workshop with staff. At the start the workshop was just for senior members of the company to take a look around and check that everything was in the correct place.

“As it turned out they wanted to fit a stairwell in against one of the walls that wasn’t in the original plans and they weren’t sure if there was enough room between the wall and a machine that was about to be fitted.

“We were able to move that machine out to make room for the stairs, get accurate measurements from Visionary Render of the difference between the old location of the machine and the new location. This was done for all the changes made during the VR workshop.

“The senior members then got employees from the shop floor involved so they could have a look around too and get an idea of what they would be moving in to so they could see exactly where they were going to be working and figure out if everything was in the right place.”

Jake added: “It was one of the most rewarding projects I have done simply because it was an SME but they really saw such value in the VR technology.”

The assist was made possible through a HVM Catapult-funded short project for SMEs and once ACS Stainless were happy, they supplied measurements to architects who could then produce amended drawings that were given to contractors for the fit-out of the new facility.

David added: “Working with the AMRC was very beneficial and gave me peace of mind as we had one opportunity to get things right. Due to the scale and complexity of some of the equipment, any requirement to reposition some of the machines would have resulted in significant delays to the project completion date, but also we would have incurred significant costs.

“Jake came to our offices and allowed the team to see the impact of our decisions and understand the scale of the project that we were undertaking. It was important to appreciate the working environment but also space requirements for maintaining the equipment.

“The VR kit was quick and easy to set up, good fun to use, and ultimately ensured the team were fully engaged and enjoyed being part of the decision making process.”