Satellite system getting ready for launch 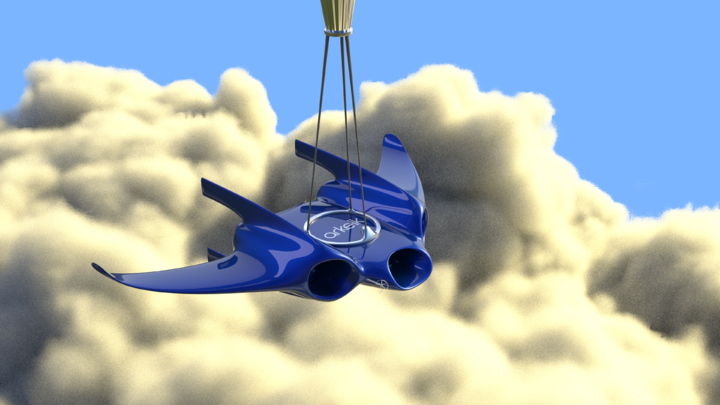 The AMRC design for Arkeik's High Elevation Launch Platform is shown above the clouds in orbit.

A former soldier in the Parachute Regiment has taken a giant leap towards creating a novel launching system using balloons to put satellites into space following a collaboration with design engineers at the University of Sheffield’s Advanced Manufacturing Research Centre (AMRC).

Sean Ardron set up Rotherham based Arkeik in 2017 to explore how high altitude balloons could be used to take a small payload up to an altitude, where they could be orientated and then launched into Low Earth Orbit (LEO).

With the help of the AMRC, he now believes his innovative High Elevation Launch Platform (HELP) could be operational within 12 months and might even replace ground-based rockets to give UK industry a doorway into space exploration.

The AMRC is part of the High Value Manufacturing Catapult (HVMC) and the project was paid for using funds from the HVMC as part of a commitment to working with small and medium-sized manufacturers.

“Although my background is not in this industry, I had worked on land based projects with BAE Systems while I was in the military, but I could not have got to this stage without the support of the AMRC in visualising the idea behind the launch system,” said Sean, who was in the 1st Battalion Parachute Regiment.

“High altitude balloons using the free lift with lighter-than-air gas had not been looked at for a long time because the surrounding technologies to make them efficient just wasn’t available. Recently, there has been a massive increase in small technology for the use of rotary drones so we have repurposed a lot of that for what we need.

“I just needed to develop a computer system that can take a small payload up to a certain altitude, orientate and then launch into LEO.” Arkeik has already carried out test flights reaching 5km above sea level and the next step is to create a working prototype, which starts with a design the company can show to potential investors.

Billy Redpath, Senior Project Manager at the AMRC’s Design and Prototyping Group, said: “The system Sean has is similar to a weather balloon which has a drone attached to it. It gets to an appropriate altitude, orientates, launches a satellite and then you guide it back to the ground.

“The designs they were using for presentations to potential funders had been created in-house and didn’t necessarily convey the project accurately, so we visualised it for them.”

Billy and his team of engineers were not given specific dimensions or criteria for designing the prototype, but they were able to use a healthy dose of artistic license to capture the essence of the novel launching system: “There are certainly engineering elements to it. We had to consider how it would be able to launch at a set elevation and how it would orientate at altitude. Essentially though, the task was understanding an idea in someone’s head and attempting to visualise it.” I wouldn’t have had the capacity to do what they have done. Quality designs are something you really need for projects, especially when you are trying to get people to fork out money.

The images will form an important part of Arkeik’s marketing strategy as the company applies for funding and grants to pay for research into housing larger payloads, building fully reusable ballonets and developing their Unmanned Aerial System.

“I am really pleased with what Billy and the AMRC have produced, I wouldn’t have had the capacity to do what they have done. Quality designs are something you really need for projects, especially when you are trying to get people to fork out money,” said Sean.

“We know all the individual parts work, we have tested them, we just need to get a working prototype that hopefully looks like the design created by the AMRC. That is what the investment will help us with.”

The ability to put satellites into orbit is limited due to the necessity of ground launching from a rocket. Small satellites, such as the ones Arkeik hope to work with, are classed as secondary cargo which means they cannot commission a rocket nor dictate the orbit that they launch to.

At present, that means companies using micro-satellites must either compromise on their preferred orbit or wait an undetermined amount of time until the right rocket launches. Sean continued: “We can certainly sell this technology. Currently, the UK doesn’t have a launch capability which means companies here have to send their satellites to India or piggyback off rockets in the USA.

“A standard cube satellite is 13x10cm and weighs a kilogram so I can quite confidently say we could launch them from HELP. Once operational, it would be weather dependant, but we could send a platform up to the right altitude and launch all in just three hours.

“If everything went perfectly and we got the money we needed, we could quite easily have this operational within 12 months. Eventually, it could replace ground-based rockets and give UK business and industry a doorway into space exploration.”

AMRC is an ‘enormous success’ but more to be done
19/03/2019
A powerful Parliamentary committee investigating the effectiveness of the Government& …
Space - the final frontier for Yorkshire manufacturers?
09/05/2022
“Creating a destination for space technology and manufacturing in Yorkshire is …
Driving South Yorkshire’s green economic recovery
29/06/2020
A £74m investment in green automotive technology could bring more than 200 high …
Small firms: big ambitions
15/08/2019
Innovation is hard wired into the circuitry of all the smaller companies who attended …