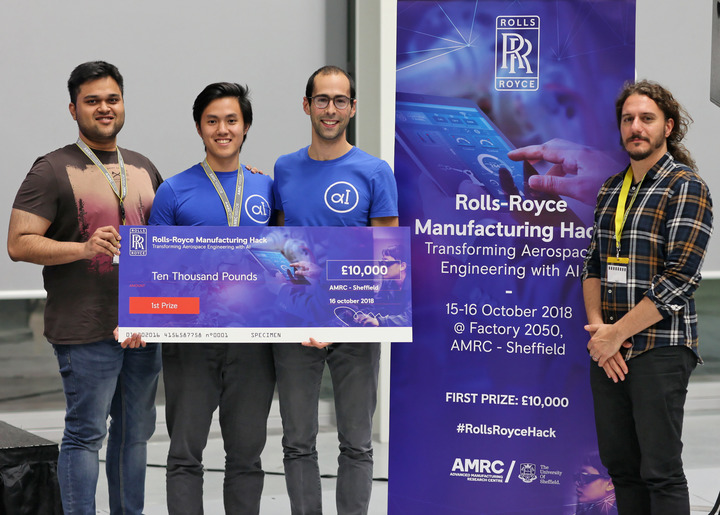 The winning team Alpha-I who took the top spot at the Rolls-Royce manufacturing hack.

A software company specialising in AI-powered maintenance solutions for aerospace is flying high after taking the top spot at a two-day hackathon organised by Rolls-Royce.

Alpha-I – which builds machine learning platforms working with some of the largest aircraft and component manufacturers in the industry - beat 11 other teams to be named champions of the manufacturing hack held at the University of Sheffield Advanced Manufacturing Research Centre, winning £10,000 and a partnership with Rolls-Royce.

The 12 teams – made up of engineers specialising in artificial intelligence (AI), machine learning and data science – were tasked by the engineering giant to tackle a real business challenge by looking at a collection of data, ‘cleaning’ it and creating a super-human decision making engine to try and develop and enhance manufacturing processes at Rolls-Royce. Alpha-I merged their expertise in predictive maintenance with data analytics to propel themselves to victory, and were chosen as the winning team by a panel of Rolls-Royce judges at the event finale on Tuesday.

Alpha-I’s CEO, Giacomo Mariotti, said winning had been ‘a great validation’ for the team, comprising chief technical officer Daniele Murroni, machine learning engineers Parvez Alam Kazi and William Tai, and software engineer Gabriele Alese. They will use the prize money as seed funding to help develop their winning solution into a proof of concept in partnership with Rolls-Royce’s Manufacturing Technology and R² Data Labs teams.

Giacomo said: “It has been a very tough 48 hours. We were here very late on the first night and came in early the next morning and I think we did a good job trying to work towards something we could achieve and squeezed in every tiny bit of detail in.

“The quality of the other teams’ work was really high and it feels great to have won. I think to some extent we knew what to shoot for and that helped us a lot.

“The aerospace industry is something we are very interested in and Rolls-Royce will be a great partner going forward. We hope this could be the beginning of something very interesting for us.”

Judge Caroline Gorski, Group Director of R2 Data Labs at Rolls-Royce, said the hack had been an extraordinary couple of days – attracting teams from across the UK and as far away as Belarus, bringing with them bucket loads of ‘dynamism, enthusiasm, intelligence and a difference in thinking’.

She said: “I’m thrilled at the sheer diversity of the thinking and intelligence that we have seen displayed here; people from different cultures and backgrounds applying different sorts of techniques on a challenging data set on a domain that is not necessarily easy to apprehend and understand.

“We had very challenging conversation in the judging room. There were several teams in strong contention and we ended up with a healthy debate around two specific outlying leaders – there was a lot of backwards and forwards, and some blood, sweat and tears left on that judging room floor.” She said there were a number of reasons Alpha-I soared to victory.

“It was partly about their ability to show how the data science techniques and machine learning techniques they used would have a direct influence on our processes; and partly to do with the sheer understanding and inquisitiveness they showed in trying to get close to Rolls-Royce as a customer and thinking about the real way that their solution would land within Rolls-Royce’s employee base and how that might really affect the way our business would change.”

Both Rolls-Royce and the AMRC fielded home teams in the event and Julia Groß, Head of Innovation at Rolls-Royce, said the judges were astonished by the quality of their results but more so by the courage they showed leaving their comfort zones to hack against professionals. The event, held at the AMRC’s flagship Factory 2050 facility, was a hailed a tremendous success by Faizan Patankar, Venturing and Incubation Lead for R² Data Labs at Rolls-Royce, who declared Factory 2050 as a ‘a great and inspiring space’ which brought out the best in the teams and mentors.

He said he was keen to continue a relationship with the teams beyond the hack, telling them: “Everything I have seen over the last 48 hours is amazing. Let’s be clear, this isn’t a ‘Fight Club’. Whatever happens at hackathon should get out there. So go out there, share what you have done, and connect with Rolls-Royce outside of this event.”

AMRC strengthens links with Korea following new agreement on collaboration
13/10/2015
The University of Sheffield is to set up a branch of its Advanced Manufacturing Resea …
Space - the final frontier for Yorkshire manufacturers?
09/05/2022
“Creating a destination for space technology and manufacturing in Yorkshire is …
SAS partners AMRC to drive manufacturing innovation
29/01/2020
Analytics and software solutions company SAS has become a tier one partner at th …
University of Sheffield makes advanced manufacturing links to China's space programme
26/09/2016
The Advanced Manufacturing Research Centre and the Shanghai Academy of Spaceflight Te …