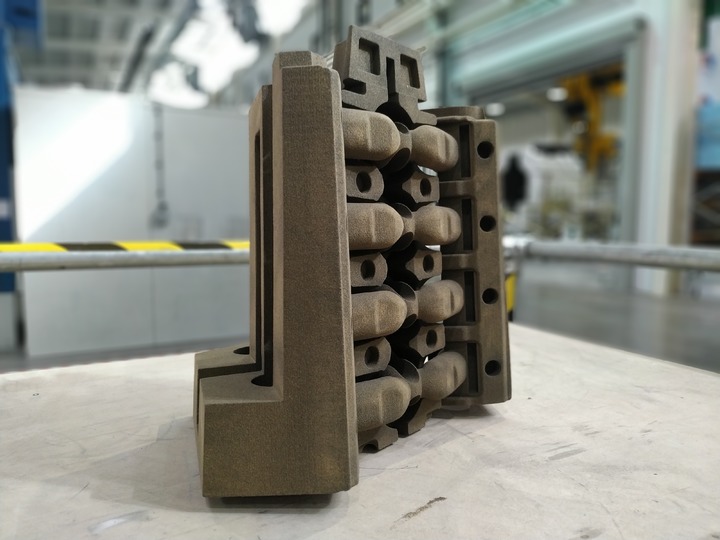 As one of the first foundries to take advantage of large-scale 3D sand printing technology in the early 2000s, the AMRC Castings Group has recently enhanced both its capacity and physical envelope.

Capable of producing complex moulds and cores for oil, gas, aerospace and automotive without the need for dedicated tooling, the technology has been exploited for R&D, pre-production and full-scale production volumes at the University of Sheffield Advanced Manufacturing Research Centre (AMRC).

AMRC Castings, which is part of the AMRC and is based on the Advanced Manufacturing Park at Catcliffe, now has two of the additive manufacturing machines for the printing of one-piece 3D sand moulds and complex cores that would ordinarily require significant capital investment in pattern equipment and multiple core-boxes to be made and assembled. The ExOne S15 digital mould and core making system has recently been upgraded by the Castings Group to incorporate a new, advanced operating system which increases the speed at which printing takes place. This machine has also been modified to run on 100% Cerabead – suited to higher temperature alloys and boasting a build envelope of 1500mm x 750mm x 750mm. The Casting Group’s Anthony Kenney said: “As before, both machines print 3D sand printed moulds and cores for use in the foundry industry.”

“However, due to further investment in process enhancements we have been able to increase capacity, accuracy and further reduce lead times.”

Anthony explains that due to the moulds and cores being made as single pieces, castings with a high degree of both accuracy and geometrical relationship can be produced to DCTG7 (casting dimensional tolerance) flexibly, quickly and accurately. Aside from the more obvious benefits, the hydrodynamic balance attainable from this technology is unrivalled.

“This means, regardless of size, moulds and cores can be made with an accuracy of plus or minus 0.3mm and, depending on the print density, the typical turnaround time is between 12-24 hours printing for the SMax and between 24 and 50 hours for the S15.

“This can be transformational for clients, who typically invest tens-of-thousands of pounds in dedicated, inflexible tooling that takes longer alone to manufacture than it takes us to deliver a finished casting. Furthermore, we can easily incorporate minor design revisions without any further costs being incurred.”

Anthony added: “As well as utilising this technology to produce high value-add castings, we operate a bureau service, printing moulds for casting by others, directly from their 3D CAD model. The typical lead time for a mould, dependent upon the current production schedule, is five to ten working days.

“Cti (the commercial arm of the group) can also consult and advise on design and methoding using 3D sand printed moulds and cores, if a foundry has no, or limited previous experience.”

Composites Machining
01/09/2016
Date: 21st September 2016As industries such as aerospace, automotive and renewabl …
Consilio3D initiative with the AMRC supports new manufacturing techniques
10/03/2015
Consilio3D Ltd are playing a crucial part in enabling innovation in conjunction with …
Treading the critical path to increasing capacity and controlling costs creates aerospace opportunit
25/07/2016
The aerospace sector is continuing to grow and provide opportunities for UK suppliers …
UK manufacturers could miss out on the multi-billion benefits of world's largest wind farm
25/02/2016
A renewable energy manufacturing expert is warning that foreign companies could rea …