AMRC gets a kick out of luxury footwear carrier project 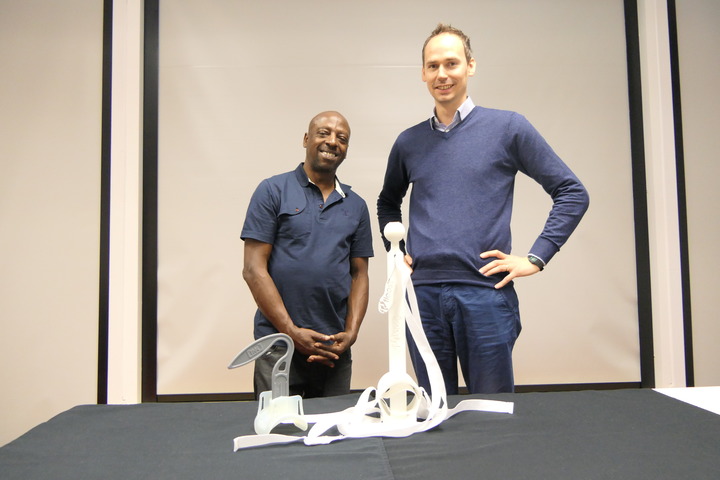 Handover: Dee Warburton takes receipt of the DPG design for his Footloose Footwear carrier from the AMRC’s John Spencer, Senior Project Manager at the DPG.

Engineers from the AMRC put their best foot forward to help develop a luxury sports shoe carrier for injection moulding manufacture by reducing the number of components by half.

DPG Design Engineer, Valdis Krumins, looked at the handle design, an alternative to using straps for securing footwear in the carrier, as well as the hook and stand design.

Dee Warburton, creative director of Infinite Kreationz, provided a Selective Laser Sintered (SLS) model to demonstrate the concept which the DPG then refined, creating a carrier made up of just three parts rather than the six in the proof-of-concept model. This meant just two injection mould tools would be needed for manufacture because two of the three parts share the same geometry.

The demonstrator was 3D printed in polymer as it allowed the team to make a functional prototype straight away in order to assess the functionality of the design without having to cut metal to create a mould tool.

John Spencer, Senior Project Manager at the DPG, said: “One of the main barriers for start-up companies launching a plastic moulded product is the initial investment in tooling.  We were able to review Dee’s initial design with a view to reducing the number of components and simplifying their geometry, without compromising the functionality of the product.  This led to a reduction in the complexity and number of injection mould tools that would be required to manufacture the suite of components, optimising the assembly for volume manufacture”.

“Dee now has a benchmark design he can take to tool-makers. Further design changes can be made with an idea of the impact of these on tooling and piece-part cost, enabling the company to make informed decisions before proceeding to manufacture.”

Valdis added: “The original carrier model was made up of six components and these hadn’t been designed to be injection moulded, so the whole assembly was redesigned to reduce the overall number of components by half and optimise each component for manufacture.  A new method of securing the footwear was designed, removing the need for straps and allowing easy adjustment for different shoe sizes.” Dee, who is the brains behind the Footloose Footwear Carrier, said help from the AMRC to further develop his design and prototype not only resulted in the overall original design being successfully reduced but the final product remained fully functional, practical, innovative and more environmentally friendly.

“The Footloose Footwear Carrier, which was inspired during my time touring Europe in the early 1990’s as a professional Street Dancer for Warp Records, is aimed at the fashion-conscious, luxury sports footwear market, alongside footballers, tennis players and other active lifestyle users wanting to carry their footwear in style,” said Dee.

“The advice provided during the one-to-one meetings was invaluable and the technical CAD services were of the highest quality and second to none in professionalism and expertise.

“I would highly recommend the services of the University of Sheffield AMRC to anyone requiring advanced manufacturing research or design services - they exceeded expectations and provided the high quality services needed to develop, produce and market new products successfully.

“I’m now in the process of finalising the design to progress onto the next product development stage of tooling and production in England using recyclable and sustainable environmentally friendly materials.”

Dee is aiming to fund the next stage of the Footloose Footwear Carrier’s development via an online crowd funding campaign and a feature on BBC 2’s Dragons’ Den.

Hunt starts for entrepreneurs with technologies that could improve everyday life
13/01/2017
Applications have opened for the next Pitch@Palace, the prestigious technology contes …
UK joins hands with Canada to do the Salsa
19/11/2019
The AMRC has joined forces with a UK tech start-up and a global engineering giant in …
Where digital manufacturing meets construction
21/09/2018
It might seem a little odd that one of the world’s largest financial services c …
TV star George Clarke amazed by AMRC Training Centre apprenticeships
01/03/2019
Top TV architect George Clarke was blown away by the AMRC Training Centre during a vi …