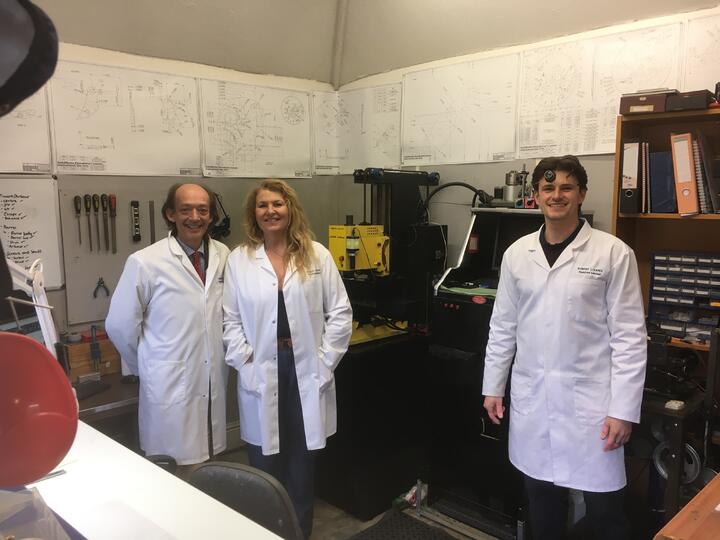 Loomes & Co's Robert Loomes, Robina Hill and watchmaker Josh Muir who worked with the AMRC to recommission the CNC machine.

A milling machine that laid dormant is back in action producing parts for luxury British-made timepieces after a University of Sheffield Advanced Manufacturing Research Centre (AMRC) engineer re-commissioned the machine tool and trained staff how to use it.

Watchmaker Loomes & Co has a three-axis CNC machine that had been gathering dust in a corner of its Stamford workshop, partly due to a lack of machining knowledge in the workforce. It was put on pause after a previous operator left the company, leaving only one person capable of running the machine - owner Robert Loomes.

But Robert rarely has time to commit to operating the machine, so he turned to the University of Sheffield AMRC for help bringing the equipment back into service and upskilling a new member of staff with the basics in computer-aided design (CAD) and computer-aided manufacturing (CAM) to allow in-house production of prototypes and parts for the company’s entirely British-made watches.

Emma Parkin, a project engineer at the AMRC Machining Group, stepped in to help. She made several visits to Loomes & Co, undertaking a number of problem-solving exercises to address issues with existing equipment such as on-machine microscopes, CAD/CAM software and machine set up. She also carried out programming and discussed best practices regarding fixturing, tool selection, cutting strategies and general machine health.

Emma said: “Loomes & Co is a British watchmaker that produces an entirely ‘made in the UK’ range of watches - every component in the watch is British-made - and the majority of the watch movement is made in-house at Loomes & Co on a three-axis machine tool.

“This machine had been out of commission for nearly two years due to lack of machine knowledge within the workforce. We were asked to re-commission the machine, service it and train the new staff with the basics of how to use a CAD/CAM package and the machine tool so they could produce further watch components.” Robert said what was delivered in a few days by Emma and the AMRC, which is part of the High Value Manufacturing (HVM) Catapult network of research centres, could have taken his company ‘years of practice and experimentation’ to achieve, and has helped boost productivity and spur innovation.

“This level of improved precision and cleanliness means we can work faster and crisper,” said Robert. “It means we can get from an idea to a finished product much quicker than we ever could before, and that we can afford to take more risks and have the freedom to be more agile and develop more quickly.

“A lot of what we do is about ‘flag-waving’ achievements. They might not be what makes money for the business but if you make something amazing, complicated, different or special, that innovation captures attention - so being able to use this machine to produce new things on a regular basis is critical to the future of the business.”

The company is based in a former gaol house that dates back to 1588 and is spread over four floors. Its workshops are a showcase of horological expertise, and its watchmaking ancestry can be traced back to Thomas Loomes who, in the 1650s, ran London’s largest firm of clock and watchmakers.

Emma said Loomes & Co only began making watches in 2008 but has enjoyed global acclaim in that time, gracing the pages of publications like GQ magazine and the New York Times. She added: “It is a fascinating place to visit, it is like stepping into another world. The Loomes Original watch is an entirely in-house made movement, every component has been designed and made by them. As an engineer I specialise in micro-machining so it was amazing to be able to go to the Loomes & Co workshop and see for myself a watch movement that has been entirely developed, manufactured and built in Britain.”

“She also helped us to understand how we could make things better; to do things as well as we could and as quickly as we could. She cut down some of our machining times massively - there were some components that were taking us about three hours to make and Emma helped us to work out how to use the optimum speeds and feeds for the materials we were working with to get sharp, crisp results much quicker. For some of the operations we have almost halved the time it takes to do them.

“It has been really gratifying to work with the AMRC not least because of Emma’s amazing breadth of expertise and experience in helping us bring this machine back into operation and making parts for our watches.”

The project was paid for using funds from the High Value Manufacturing (HVM) Catapult as part of its commitment to supporting the UK’s smaller and medium-sized enterprises.