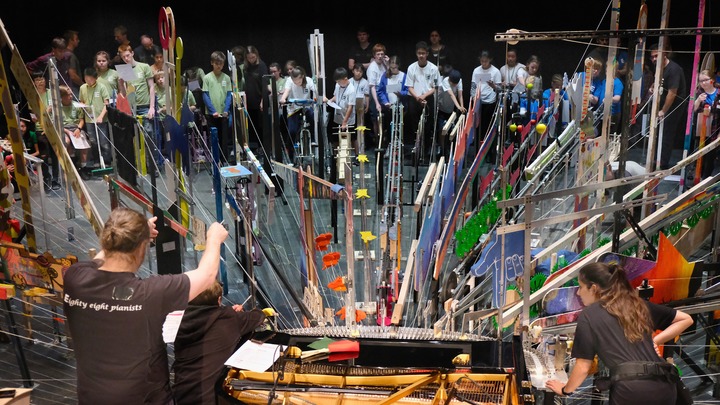 School children and engineers take to the stage at the International Convention Centre in Birmingham.

The University of Sheffield’s Advanced Manufacturing Research Centre (AMRC) has scaled new heights, playing a key role in a new world record for the number of people playing the same piano at the same time.

On Monday 19th August, at the opening ceremony of the 69th CIRP (The International Academy for Production Engineering) General Assembly in Birmingham, 88 school children played a newly-commissioned piece of music composed and conducted by pianist Martin Riley, smashing the previous record of 21.

The ’88 Pianists’ project was launched in 2018, with budding engineers from across the country asked to solve the problem of fitting 88 people around a piano by designing mechanical extendable fingers which could work from seven metres away and allow 88 pupils to each play a separate note. In total 2,500 designs were submitted, of which 88 were shortlisted to be created.

The AMRC worked with Brockwell Junior School in Chesterfield, Greenside Primary School in Leeds and Woodthorpe Community Primary School in Sheffield, with engineers initially introducing the children to the project, then helping them with their imaginative designs before finally turning seven winning designs into real-life extendable fingers.

Senior Technical Fellow, Dr Erdem Ozturk, who led the AMRC’s involvement in the project, said: “We created three teams to go into the three schools, each with two engineers and one musician.

“We collected the children’s designs and then the steering committee, along with 50 engineers and musicians, selected the 88 designs that would then be manufactured. Engineers at the AMRC helped build the prototypes and then returned to the schools to receive some more input from pupils.”

Each design was given a name, with Brockwell’s ‘The Metal Cog Thingie’, Greenside’s ‘The Monkey Machine’ and Woodthorpe’s ‘Water Whirler!’ among the 88 chosen to help break the world record. “I have been so impressed with the students, they were excited about the challenge and keen to find original solutions. The main aim was not the breaking of the world record but to inspire future generations to use their creativity to solve this challenge,” said Erdem.

’88 Pianists’ is the brainchild of University of Cambridge Professor of Engineering and the Environment, Julian Allwood, who wanted to mark the 500th anniversary of the death of inventor, engineer and artist Leonardo da Vinci by answering a simple question: has the smart phone killed invention?

Professor Allwood said: “I’m really captivated by the opportunity that this project has revealed to explore the space for expansive imagination between the creative arts and technology.

“The reaction from the audience was overwhelming. To my surprise, the statement I heard most often from what I thought were my hard-headed academic colleagues was that they were moved to tears.”

AMRC engineers not only helped the children with their designs and manufactured their individual extendable fingers, the AMRC’s Factory of the Future also played a vital role in bringing the whole project together, as Erdem explained: “We recognised quite early in the project that it would not be possible for the 88 mechanisms, designed by the students, to actually hit the keys so it was decided a metallic C-plate adapter was needed on top of the piano to connect them.

“It was designed by the team at the University of Cambridge but is a very large piece so needed specialist machine tools like that available at the AMRC’s Factory of the Future, so we produced it for them in the composite workshop.” Academics and students from the University of Sheffield’s Faculty of Engineering helped pupils at Hallam Primary School and Lydgate Junior School to develop six designs used in the final performance.

Dr Candice Majewski, from the University’s Department of Mechanical Engineering, who co-ordinated the Faculty of Engineering’s involvement in the project, said: “This whole experience has been incredible from start to finish.

“The enthusiasm and creativity of the school children has been way beyond what we expected, and we’re very grateful to the teachers who so willingly welcomed us into their classrooms.

“The final event was spectacular, but more than anything I hope we’ve left a lasting passion for engineering with the school children we’ve worked with.”

Project to transform aircraft maintenance through digitisation to be piloted in real-world scenarios
26/07/2018
A pioneering project to develop an innovative aerospace maintenance, repair and overh …
Future funding for innovation
28/09/2017
Digital and tech companies from across the Sheffield City Region were told how they c …
Optimisation of FDM composite lay-up tooling for additive manufacture
19/02/2015
Researchers at the AMRC Design & Prototyping Group have succeeded in cutting the …
LBBC Technologies new facility officially opened
02/12/2014
Leading autoclave manufacturer LBBC Technologies' new manufacturing facility has been …