Can IDC team clean up at soapbox race? 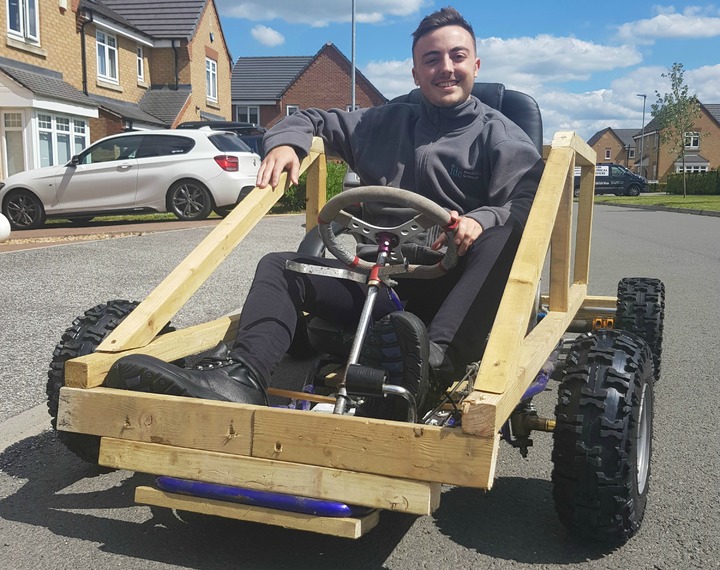 IDC student Jack Secker in the soapbox racer, which will be decorated this week ahead of the race on Saturday.

A group of research students at the University of Sheffield Advanced Manufacturing Research Centre (AMRC) has designed and crafted a soapbox racer to compete in the Scarcliffe Soapbox Derby.

Students from the Industrial Doctorate Centre (IDC) for Machining Science – a collaboration between the University of Sheffield AMRC and Faculty of Engineering to provide EngD and PhD training – have spent their free time creating the motor-less, gravity-propelled ‘soapbox’, a name hailing from the early 20th century when people created the makeshift racing vehicles from wooden soap crates.

The IDC students will be up against 44 other teams as they race, downhill, through the heart of Scarcliffe village in Derbyshire on Saturday, June 29. They are taking part to raise money for Ashgate Hospice in Chesterfield, which provides care for patients with life-limiting illnesses.

Achieving speeds of up to 40mph on the course, racers in the derby have to overcome tricky obstacles including a chicane and a jump before reaching the finish line – hopefully with their soapboxes intact and a fast time on the clock.

Team member Robert says they have just one goal for their first outing - pass the finish line with the soapbox, and driver Oscar Seward, in one piece.

“We’ve been collecting parts over the last few months and it’s taken a while to bring it all together,” said Robert. “We started by getting a go-kart chassis to build it around. The first we got was too small and we had to source another. We then thought that might be too big so we had to make a few modifications to get it right.

“It’s been back and forth to the point where the wheels have been delivered, the frame is on and all that is left to do is decorate it.”

They had planned to use CAD (computer-aided design) to design the racer but work commitments meant they didn’t have time. However, Robert said half the fun has been going back to basics.

“We started looking at websites like eBay and Gumtree for a go-kart chassis that we could adapt. Unfortunately, the first one we bought, the person who sold it to us had measured the length in bricks so we had no idea how long this thing was. When we went to collect it, it was tiny. So we had to find another and ended up taking a trip to Leicester for it.

“Our soapbox is quite a conventional design really with axels and a frame for the decorations to go on. We want to make it go quite fast, however, we realise that we’re novice builders at this.

“It’s going to have a mediaeval theme and we’ll dress as dragons to push the driver off. We want to go as fast as we can but the main thing is we’re looking to have fun.”

With just a few weeks to go until race day, the students are keen to fatten up their fundraising efforts and are asking people to donate a couple of quid to the good cause. Robert said: “We chose the hospice because it is quite relatable. I think most of us know someone who has had some kind of life-threatening illness and, unfortunately, some of us know people who have died from a life-threatening illness.

“That’s why it’s good to be able to give money to a charity that makes those final days more comfortable.

“As well as having a lot of fun with the soapbox there is something really great about being able to hand over whatever money we can to the hospice so they can put it to good use.”

Keeping the space industry at the cutting edge
03/08/2020
Composite engineers at the University of Sheffield AMRC were singled out for praise b …
AMRC helps develop novel laser tracker
01/10/2018
Engineers at the AMRC have helped develop a novel laser tracking measurement device t …
TRAM UK 2015
24/03/2015
10-11 November 2015 Magna, RotherhamTRAM (Trends in Advanced Machining, Manufactu …
Heathrow Airport delegation lands at AMRC during Sheffield City Region visit
29/05/2018
A DELEGATION from Heathrow Airport touched down at the University of Sheffield’ …