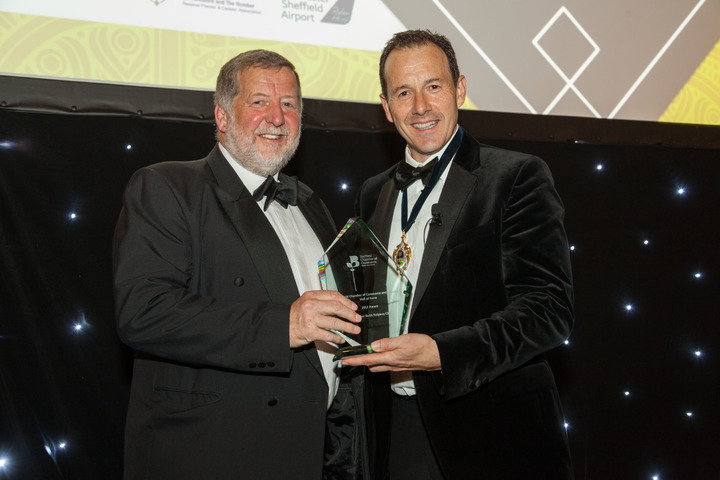 Professor Keith Ridgway receiving his Hall of Fame award from the President of Sheffield Chamber of Commerce and Industry, Darren Pearce

Applause rang out around the Cutlers’ Hall when Keith Ridgway – co-founder and Executive Dean of the Advanced Manufacturing Research Centre – was inducted into the Sheffield Hall of Fame for the ‘immense’ contribution he has made to the city region.

Richard Wright, Executive Director of the Sheffield Chamber of Commerce, said: “This award is chosen by the Chamber for those who have made a significant contribution to Sheffield and its success. Keith is a worthy addition because of what he has done at the AMRC. His leadership and vision is immense and, as a consequence, the results are immense.

“Very few people would have predicted that the old Orgreave pit site would become one of the preeminent business parks in the country with companies like Rolls Royce, Primetals (Siemens), McLaren and Boeing all operating there. It has underpinned a future for Sheffield, as a city, being forever associated with Advanced Manufacturing and many future employees should be grateful for what he has done. Few people get to leave such a legacy but Keith has.”

Keith, along with his wife Christine, were guests at the annual Sheffield Chamber Presidents Dinner, but were utterly unaware that an award was to be made. “It’s an honour and a privilege to receive this recognition,” said Keith. “But what we have achieved at the AMRC has been a team effort from the start. Having great people around you makes anything possible.”

Real benefits of virtual simulation
26/10/2018
Even before the official opening of Boeing’s first production facility in Europ …
AMRC reducing the barriers to R&D investment
18/04/2018
As part of our role in driving step-change improvements in productivity, quality and …
Close Brothers apprentices start at AMRC Training Centre
11/12/2018
The next generation of advanced engineers brimming with fresh talent and new ideas ha …
South Yorkshire company Polypipe become the 100th member of the AMRC
16/05/2017
Doncaster-based company Polypipe have become the 100th member of the University of …