Getting a handle on marginal gains 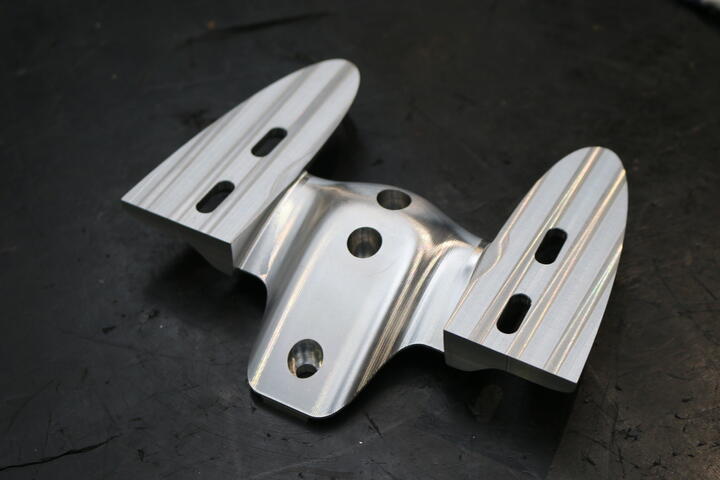 The interface plate, made from aerospace-grade aluminium, helped HUUB-Wattbike achieve their most successful National Championships yet in January 2020.

HUUB-Wattbike, an independent Union Cycliste Internationale (UCI) team based in Derby, have earned an enviable reputation since they burst onto the scene in 2017, employing innovative techniques to unlock incremental improvements on performance.

The pioneering approach to achieving aerodynamic gains has earned the team wins at two World Cups, Commonwealth Games medals and national titles. In 2021, four HUUB-Wattbike riders travel to South America where it is hoped the reduction in air density from high altitude will deliver another marginal gain so they can break the 4km Team Pursuit world record, 4km Individual Pursuit world record and UCI Hour Record.

Founder, rider and engineer, Dan Bigham, said: “Our aim has always been to ride fast and enjoy it. We employ a pragmatic approach to performance; creating and optimising the systems around us within the bounds of our strict financial and competitive constraints.”

In November 2019, a sudden change in UCI regulations meant Bigham needed to quickly redesign the state-of-the-art interface plate which connects the bicycle stem and handlebars. To be ready in time for the December World Cup event in Brisbane, the parts had to be machined in under two weeks from aerospace-grade aluminium.

“One of our team partners, Meggitt, are a tier two member of the AMRC,” said Dan. “When we reached out to Meggitt with this project they went straight to the AMRC, knowing just how capable they are at executing unique manufacturing projects to a tight timescale.”

Research Director at the AMRC, Ben Morgan, said: “In the past, the component had a fairly prismatic design and Dan had turned it into an extremely aerodynamically-efficient design. It was full five-axis machining of the part, pulling together materials and programming exceptionally quickly, all to make this small, incremental difference in aerodynamics.”

Dan said those marginal gains were central to their huge achievements at the National Track Championships in January 2020 where the quartet of himself, John Archibald, Jonathan Wale and Will Perrett set a new championship record.

“We had our most successful National Championships yet and the new part machined by the AMRC definitely contributed to that success. The team took the top five spots in the individual pursuit, the top three places in the kilometre time trial and dominated the team pursuit.

“The next goal on our journey is to break the 4km Team Pursuit world record, 4km Individual Pursuit world record and UCI Hour Record. We will have the best chance of achieving it in Bolivia and had planned on travelling there in October, but that has now had to be delayed until next year due to Covid-19.

“I'm planning an assault on Bradley Wiggin's sea-level hour record - which is also the British record - as a bit of fun in the meantime.”

With a master’s degree in engineering and a year spent working as an aerodynamicist at Formula 1 team Mercedes AMG Petronas, it was perhaps inevitable that Dan would one day collaborate with the AMRC, part of the High Value Manufacturing (HVM) Catapult. A former Great Britain rider, competing at the 2018 UCI Track Cycling World Championships and 2018 Commonwealth Games, Dan created Wattshop in 2016 to utilise his engineering expertise to develop cycling products.

Trade team HUUB-Wattbike became a spin-off of Wattshop a year later, with the backing of triathlon clothing retailer HUUB Design. We can learn from Dan. In terms of some of the thinking, we could learn a lot in the AMRC about mentality and drive to win.

Ben said: “You could call Dan a disciple of Sir David Brailsford, in terms of bringing that marginal gains mentality to cycling; what he is doing is effecting every small part. He is really driving them from an engineering perspective; from the suits, the socks, the cleats, he has considered the aerodynamic profiling of it all. So I view him as a bit of a revolutionary in that respect.

“The team at HUUB-Wattbike always talk about ‘7-10 watts’ in their Twitter and Instagram posts and that refers to how much power they need to create when they’re cycling.

“If you can reduce your aerodynamic drag, or reduce your weight, then you need to create less power; so they suggest that maybe our upgrade on the interface plate was worth 7-10 watts. It might not seem a great deal, but if you’re cycling for an hour at high speed, that can make a huge difference.”

Ben said the project was a perfect fit between two organisations at the cutting edge of innovation: “There is a definite synergy between our mantras and our ways of working. The mind-set for HUUB-Wattbike is to constantly innovate and optimise, and that is exactly what drives the AMRC forward.

“We can learn from Dan. In terms of some of the thinking, we could learn a lot in the AMRC about mentality and drive to win.”

As Great Britain struggled to maintain their usual dominance in February’s UCI Track Cycling World Championships in Berlin, a competition not open to HUUB-Wattbike or other trade teams, Dan applied that drive to win in his role as performance engineer for the Danish team, helping them set a new world record in the men’s team pursuit.

Dan is still very much part of HUUB-Wattbike though and said the interface plate project could be the start of a long relationship with the AMRC: “We have a few ideas in the pipeline. The AMRC has such great facilities and the engineers there are leading the way on Additive Manufacturing research so we hope to take advantage of that with a few Direct Metal Laser Sintering (DMLS) components in the coming months.”

Ben added: “Hopefully this can be the start of a long association between HUUB-Wattbike and the AMRC. Dan has a real passion for innovation and is a real success story; if the AMRC can help to deliver some more aerodynamic wins which help HUUB-Wattbike on their journey, then great.”