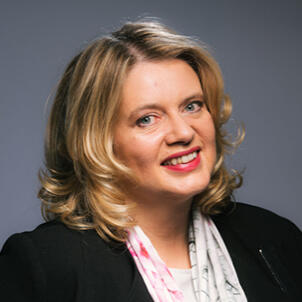 Katherine Bennett who will succeed Dick Elsy as CEO of the HVM Catapult.

The Board of the High Value Manufacturing (HVM) Catapult has announced that Katherine Bennett, currently Senior Vice President, Airbus in the UK, will succeed Dick Elsy when he retires as Chief Executive Officer later this year.

It follows a formal recruitment process led by the Chair of the HVM Catapult Allan Cook who, on announcing Katherine’s appointment, said: “I am delighted to share the news of Katherine’s appointment. She will bring a wealth of industrial experience combined with real passion for the vital role the HVM Catapult has to play in assisting the UK’s post-COVID recovery and supporting the innovation that will boost the UK’s position in global markets. Katherine is indeed a worthy successor to Dick Elsy and will undoubtedly build on his outstanding legacy for the HVM Catapult.”

Dick Elsy welcomed the news. He said: “The announcement of Katherine’s appointment is very good news not just for the High Value Manufacturing Catapult, but for the whole of UK engineering and manufacturing.  Her experience in a senior leadership role with Airbus in the UK means she brings a depth of understanding of the challenges and opportunities faced by UK manufacturers as they innovate to grow their market share and address shared challenges such as reducing carbon emissions. I will be pleased to leave the organisation in her extremely capable hands.”

Katherine Bennett said: “I am honoured to have been asked to lead the next phase of the High Value Manufacturing Catapult’s development, building on the strong foundations which have been created over the past eight years.  The HVM Catapult has the wide-ranging relationships and understanding needed to be part of the Industrial Strategy refresh process and to contribute to building the UK’s status as a scientific superpower. The Catapult’s country-wide network of centres provides the ideal platform from which to diffuse the latest capabilities to the thousands of manufacturing businesses that are the bedrock of our economy, boosting their performance, preparing them to be part of the Prime Minister’s Green Industrial Revolution and growing their contribution to our national prosperity.”

Katherine will join the HVM Catapult later this year.

The HVM Catapult has an established record as the UK’s principal agent of industrial transformation. Through seven centres, including the University of Sheffield AMRC and Nuclear AMRC, the HVM Catapult is working to create the conditions for UK economic growth by enabling UK manufacturers to investigate new technologies and processes and achieve performance and productivity improvements through innovation.

Established by Innovate UK, the HVM Catapult bridges the gap between business and academia, helping to turn great ideas into commercial realities by providing access to world-class research, development facilities and expertise that would otherwise be out of reach for many businesses in the UK. The HVM Catapult prides itself on helping businesses to transform the products they sell, the way they make them and the skills of their workforce to remain competitive in a global marketplace. For more information visit the website here.

Born in Warwickshire, Katherine is a Senior Vice President of Airbus and has been with the company for 16 years.   She leads the company’s external engagement and strategy in the UK.

Katherine’s previous employment was with Vauxhall Motors where she headed up their government affairs function and prior to that worked for Hill and Knowlton Public Relations in London, working with a range of industrial clients.

Katherine was awarded the Order of Commander of the British Empire in January 2019 for services to the aerospace and aviation sector.  She has served on various boards of public/private enterprises.  She is Vice President, Aerospace on the Council of ADS (the UK aerospace trade association), on the Board of the Aerospace Growth Partnership (part of the UK Government’s Industrial Strategy) and of the Wales Government Science and Innovation Council. In November 2019 Katherine was appointed as Chair of the Western Gateway, a cross government and local authority initiative which will aim to promote and maximise economic growth across south Wales and the West of England.   Katherine managed the public affairs for VentilatorChallengeUK which was led by the HVM Catapult.

In July 2018, Katherine founded the UK’s Women in Aviation and Aerospace Charter which is committed to building a fair and balanced industry for women in this sector and is on the Board of the International Aviation Womens Association.  Katherine has an Honorary Doctorate from Cranfield University. She is active in her local community in Wiltshire, is a church organist, a member of the UK Parliament Choir and founder of the Airbus Filton Choir.