Immersed in Europe, on track in Manchester 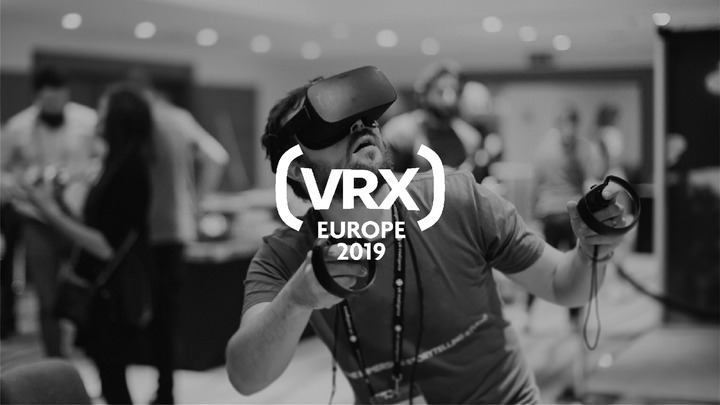 A stellar gathering of Europe’s leading players in the creative, gaming and artistic sectors might seem an unusual stage for Professor Rab Scott, Head of Digital at the AMRC, to be delivering a message on the power of immersive technology to transform manufacturing.

Before addressing the two-day VRX Europe 2019 conference in Amsterdam, Professor Scott said: “The Amsterdam meet is the place where the worlds of creativity, technology and industry collide and the boundaries between the gaming, media, manufacturing and tech sectors are not just blurred but utterly rubbed out.” Professor Scott told his audience how the use of extended reality (XR – the augmented and virtual reality continuum) has developed in design and visualisation and in training. Many people, he said, think that immersive has little to do with industry. But the opposite is true.

“The early development of AR took place in the labs of the AMRC’s founding partner: Boeing. And it is industry that continues to lead the way in technological development and application. While those rudimentary Boeing headsets never took off due to the limitations of the batteries, the cumbersome size of the headsets and network constraints, the exponential leap in computing power has now made it possible for companies like Boeing to use wearable devices like Google Glass to construct aircraft harnesses.”

Like Boeing, the AMRC has been driving the use VR/AR in the industrial space since last century. “After starting with an old fashioned CRT front projection system, we rapidly developed a reputation as the go-to place for innovative uses of VR. Even back in the early 2000s the AMRC had developed VR models showing the stresses on a lorry suspension arm – a model which even made its way across the Atlantic, being shown off at an international trade show in Chicago,” said Professor Scott.

While Professor Scott was in Amsterdam talking to the glitterati, his colleague in Factory 2050’s Integrated Manufacturing Group, Mike Lewis, was leading a high-powered, High Value Manufacturing Catapult team at the Industry 4.0 Summit in Manchester. Mike, who is Theme Lead for Digital Manufacturing, was showcasing an HVMC project that deploys AR to transform the productivity of routine maintenance teams in the rail sector.

“Quick and easy to understand instructions are important for accurate and efficient maintenance processes,” Mike told delegates at Manchester. “Traditional maintenance instructions are often lengthy paper directions with 2D images and diagrams, which can at times be difficult to understand, or slow to follow. Our research project focused on understanding the needs of both the maintenance operators and asset owners to improve task performance and reduce errors by providing information when and where users require it. The challenge was to create a system that would allow all these issues to be addressed.”

Working with colleagues at the WMG, and the AFRC in Scotland, Mike and his team at Factory 2050 built an intuitive application in collaboration with rail experts from Govia Thameslink Railway (GTR) and Bombardier. The solution provided GTR with an intuitive resource for the generation and deployment of augmented reality work instructions.

“The proof of concept application integrated digital work instructions with an unprecedented level of tractability. Further work in this direction could enable fault finding and real time data updates to be integrated into this software. The rail network hopes to continue development of this software to realise its potential for time saving, productivity, and safer work environments,” Mike added. This latest project is just one of scores delivered by the AMRC that include the use of VR to navigate through virtual factory layouts which integrate traditional architectural data with point cloud data and machine tool models to de-risk new factory planning and layout. “These are methods that many of our partners have used since,” Professor Scott told the Amsterdam conference.

“We are seeing VR and AR technology being applied across industrial sectors. We have delivered visualisation projects for automotive, aerospace, retail, energy, utilities and construction companies. It is now a technology that is no longer the exclusive preserve of the big players. The advent of low-cost head sets and mobile devices means that even the smallest SME can now start their virtual journey – this is demonstrated, for example, by Clarks Vehicle Conversions, a Doncaster-based SME who, through the use of VR, have now shortened their concept development time from weeks to hours, and in the process reduced their environmental impact by being able to fail fast, and fail virtually. This just highlights the benefits that adoption of these technologies can bring – and that it is never too late to start.”

But it is in the augmented reality space that Professor Scott expects the next big industrial and social disruption to occur.  “AR technology is not yet mature enough for full enterprise deployment; but the pent up demand from industry is certainly pushing the technology developers behind AR to catch up and meet that demand.

“It is not just the technology of AR devices that needs to catch up, it is also in the surrounding technologies that developments are needed. With the increase in visual quality, greater data transfer rates will be needed – surely an opportunity for 5G?” Professor Scott also believes this is an arena in which the North can excel. In the recent Creative Industries Sector Deal there were 13 creative clusters identified in the North classified as either high growth, or high growth and high concentration. “This growing pool of talent is also reflected by the recent decision of Channel 4 to move to Leeds, by the decision of 360 Degrees Media to move to High Melton and open a film studio there, and by the presence in Salford of the UKs Media City,” said Professor Scott. “It is also the reason why the AMRC has developed its Digital Meet Manufacturing campaign. This enables the growing digital sector in the North to understand what the region’s manufacturers need from them, and to allow the manufacturing sector to better understand what the digital sector can do for them.

“The message from Amsterdam and Manchester is that VR and AR isn’t just about playing games – it is a powerful enabler to productivity and growth. Researchers at the AMRC embraced these technologies nearly two decades ago, and now they lead the field in its applications across the full range of manufacturing sectors. With the roll out of the Made Smarter industrial digitalisation programme, the AMRC and its immersive leadership is supporting the North in leading what Juergen Maier has called the Fourth Industrial Revolution. AR and VR are the heart of that revolution.”