Korean students glide out of the ‘awesome’ AMRC 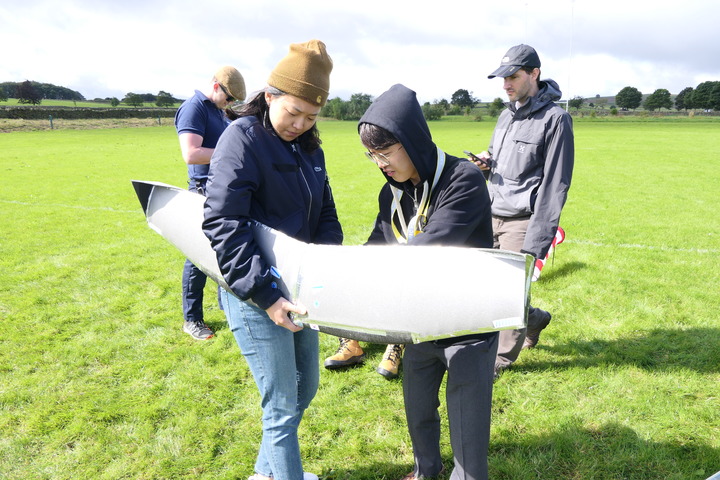 A group of South Korean students have ended an ‘awesome’ four-week visit to the University of Sheffield’s Advanced Manufacturing Research Centre (AMRC) by experiencing what it’s truly like to be an engineer in designing, manufacturing and then testing their own gliders.

During their month in the UK, the students were shown the entire Advanced Manufacturing Park with tours of the AMRC’s network of world-leading research and innovation centres including machining, composite manufacturing, additive manufacturing, assembly and digital technology, as well as Nuclear AMRC, the AMRC Training Centre and Castings Technology International (CTI).

“We wanted to show them the work of the AMRC, but we were also keen to give them a real engineering experience and help them understand the life of an engineer, that’s why we set them the glider challenge,” said Miguel Moreira, Technical Lead at the Composite Centre, who managed the IIDP.

The challenge was to design and manufacture a glider, using materials and equipment available at the AMRC, to be tested against each other. The winning prototype would be the one that spent the longest in flight.

“It is a good example of what they will find in their careers. The issues, difficulties and design constraints on this project are much like the ones engineers encounter in the real world every day,” said Miguel. Five groups were introduced to composites, trained in computer-aided design (CAD) and given a presentation on basic glider design. “But we deliberately left it incomplete,” said Research Engineer, Craig Atkins, who set the glider challenge, “to encourage the students to do their own research.”

“We split them up so they weren’t all from the same university, so as well as the technical issues, they were also having to work with people they haven’t really interacted with before. When things started to go wrong, there was a team dynamic to negotiate as well as the engineering task. We wanted to encourage them to rise to the challenge because that is what we do as engineers.”

Kyungtae Ryoo, from Hongik University, said: “We compared different models to choose which was best. The wing support didn’t quite turn out as designed so we changed it after testing. We used 3D printing for the fuselage and the wing.”

Sujeong Choi, from the University of Ulsan, added: “We went with a rectangular wing for our glider as it was easy to build, stable in flight and would extend the maximum distance in flight.

“We had so many problems with the head part, it needed a lot of trial and error to find one that was properly balanced. In the end we chose a design we called ‘Magnum’ because it looked like an ice cream.”

“By their final week, they had created the mould tools, machined them and finished their 3D printed components. The teams could then redesign if they needed to and fine tune. So in two weeks, they went from nothing to having a glider,” said Miguel.

On a windy autumnal morning, the students were introduced to Stocksbridge Rugby Club on the edge of the Peak District to test their prototypes using a catapult made by composite engineer Mark Sherriff and composite technician Joshua Oxley. The winning glider was airborne for just over five seconds. Building on the partnership between the AMRC, part of the High Value Manufacturing Catapult (HVMC), and AMRC Korea was an important part of the programme according to Craig: “For the University of Sheffield and the AMRC it’s important to have that engagement with AMRC Korea so these students are another connecting link.

“We spent some time at the University’s Faculty of Engineering, gave them a campus tour, looked at the postgraduate opportunities and gave them a flavour of life in South Yorkshire.

Hyeonho Noh, from Jeonju University, said: “I’ve had a really good time here. I want to go into research after University so spending time at the AMRC has been really enlightening.

“It has been great experiencing life in the United Kingdom as well; we went shopping, visited Sheffield Cathedral and socialised on West Street on an evening.

“The AMRC is an awesome place and we have all been really happy to spend time here.”

Principally though, the IIDP was about giving the students an engineering experience, as Miguel explained: “As an engineer, you are given criteria you need to deliver to, you think it is going one way and then you have problems, but you have to go beyond those difficulties to deliver. We hope that is what they have learned with the glider challenge.”

Access to world-class facilities at AMRC Factory 2050 made easier for SMEs with opening of new ‘reconfigurable factory’ research cell
30/08/2017
Ease of access to the world-class research and development facilities on offer at the …
New DPTC hosts Tech Fellows conference
18/11/2013
The new AMRC Design Prototyping and Testing Centre has hosted the AMRC with Boeing's …
Weaving a way to fusion energy
24/01/2020
A 3D woven composite component, capable of withstanding extreme temperatures inside a …
Region unites to welcome new McLaren Composites Technology Centre
14/11/2018
Sheffield City Region's excellence in advanced manufacturing and engineering was …