Made Smarter, made real 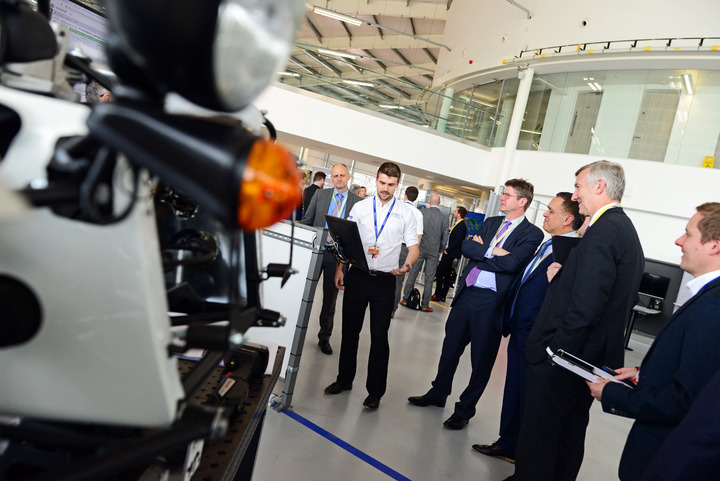 A £30m boost to the Made Smarter initiative was announced by the Secretary of State, Greg Clark, this week at the launch of UK’s first, open-access Smart Factory test bed at the AMRC’s very own, very smart, Factory 2050.

In a confident, often celebratory address, to the captains of industry gathered inside the gleaming rotunda of Factory 2050, Mr Clark paid tribute to the role of the University of Sheffield Advanced Manufacturing Research Centre in providing UK manufacturers with the smart tools they need to improve productivity, win new markets, and exploit-game changing digital technologies to the full.

“It is always a thrill to be here at the AMRC and to see in tangible form the cutting edge of manufacturing that will keep the UK competitive,” he said, as he opened the UK’s first, open-access Smart Factory test bed. He also praised the private sector consortium who played a critical in bringing the new facility to life and whose members read like a ‘Who’s Who’ of the very best and brightest of the UK aerospace, automotive and pharmaceutical industries.

“Every time I come here to the AMRC, every time I turn a corner, the pulse quickens when you see just what possibilities there are and how these are creating not just innovations, but real high quality jobs. I know that, whoever is the next PM by end of the month, he will take great pride in what has been achieved here already but will be as excited as I am about the future innovations that will come out of this test bed,” he added, in a reference to the upcoming Tory leadership contest.

“One of the frustrations of many of us in Westminster is that the dominance of Brexit in the national conversation has detracted from some of the amazing things that are going on, not least here in the AMRC, but across the UK in what Made Smarter is doing,” he added, nodding towards Siemens’ CEO and the chair of Made Smarter UK, Jüergen Maier, who was at Factory 2050 both for the launch of the test bed and also to attend a meeting of the full Made Smarter Commission. Mr Clark and members of the 19-member Commission were given a tour of the test bed which included real time data streams from remote machining activities, smart assembly using intelligent work benches and augmented reality, visual inspection linked to artificial intelligence and a reconfigurable factory cell. The test bed aims to show the significant opportunities of applying digital technologies to manufacturing with 50% productivity benefit, 30% reduction in defects and 50% improved time to market increasingly being demonstrated.

Jüergen spoke of how this first test bed at the AMRC was to be the catalyst for the creation of a national, innovation eco-system of test beds, where ’companies large and, very importantly small companies, can come and play in the sandpits to work out how they can implement advanced digital technologies like artificial intelligence and digital twins in their factories’.

To create this nationwide eco-system, however, requires leadership. Jüergen singled out praise for Rolls-Royce and Accenture in paving the way for the AMRC test bed by bringing together an industrial consortium that includes, GKN, Nissan, BAE Systems, Airbus, GSK, Pfizer, Astra Zeneca, Marshalls and the AMRC.

“What better way to display the technologies behind this eco-system than to come here today where leadership is being shown in spades. Thank you Hamid (Rolls-Royce) and Olly (Accenture) for the leadership you are showing on behalf of industry by being the catalyst and leader of this test bed, supported by many other technology companies, all of whom are in the room and supporting Made Smarter.”

In a boost to the growth of the national innovation eco-system, the Secretary of State announced: “There’s £30 million for a new competition under Made Smarter to promote the test bed that has just opened as of today. There will be an expert panel that will look at the proposals to see what impact they are going to make.”

When asked whether money from this new funding round would come to the AMRC he said: ”Oh, definitely. I mean, there is so much going on here that’s at the very cutting edge, it is good to be able to provide some further backing for it.” Accenture Managing Director, Olly Benzecry, said: “It is really good to be here today to see tangible evidence of what Made Smarter is doing, whether it be in leadership, innovation or adoption. We hugely believe in the power of Made Smarter; we see very significant opportunity for increased competitiveness; whether that be in connected products and services; or whether that be in engineering or production operations. The opportunity can come from advanced technologies, and you will see lots of that here at the AMRC.”

He said that improved productivity will stimulate growth and with growth will come new jobs. Over the next ten years, if Made Smarter is properly rolled out, there is a potential £450bn boost to employment and the UK economy. Achieving these goals, however, requires deep personal commitment. Olly paid special tribute to Hamid Mughal: “So much of what you see here today in the test bed is a result of the vision shown by Hamid and Rolls-Royce.”

Earlier, Hamid expressed perfectly the challenge and the opportunity the UK now faces: “We, as a company, are exposed to all the global trends that you see coming unabated, at a pace and a scale that is quite unparalleled in the history of industry, and one thing I am absolutely certain about is that being good at manufacturing will be a source of sovereignty and economic sustainability going forward.

“The reason simple. The challenges of a growing global population, greater demand for water, energy, land and resources, materials specifically, climate change, and the potential threat of protectionism, are all very real. This means that those nations who are able to do more with less resources will be the ones that are economically successful,” Hamid told his fellow industrialists and policy makers. He then identified a ‘special opportunity’ on the horizon – industrial digitalisation – but one which, he warned, would first require us to earn the right to use.

“Industrial digitalisation means that the inefficiencies of today, the lack of flexibility and responsiveness of manufacturing across the globe, can be eradicated by autonomous processes, fool-proof processes, assured quality, and connected value chains, all the things we aspire to but have somehow fallen short of delivering. Digitalisation makes that happen. But, like all good things we will have to earn our right to use it, to deploy it, and to deliver it.

“This is being honest about where we are. We already have a shortfall. We don’t have major companies in digitalisation operating and developing it, we don’t have big providers in the UK: so what is our future? Our future is something very special: we could become the integrators; integrators of technologies that bring together solutions for industry and create competitive advantage with high productivity, at low cost with greater reach and collaboration across the value chain. We can do that. It is innovative. It is complex. It is difficult. But it plays to our DNA of innovation. To achieve this, there are some realities that need to be sorted.

“Number one – industrial scale solutions are very complex, expensive, difficult to operate and difficult to maintain. Number two – there are very few examples of where you see shop-floor to top-floor complete seamless integration. You won’t find them because providers operate in different areas; enterprise solutions, operating solutions, shop floor solutions, all different providers. We have to collect them together. We have to create standards where they don’t exist. We have to create scale where it doesn’t exist; we have to create productivity solutions which don’t exist; and I think we are able to do that. And this test bed is exactly what we all want as industrial collaborative partners; this is making Made Smarter real.”

He thanked the young team of engineers at the AMRC for ‘being a wonderful host’ of the new test-bed and added: “I must have come here a hundred times because this a place that creates solutions, thank you so much, we are on to something very special.”

The AMRC has been a big boost to the University of Sheffield’s standing in engineering and it is great to see it paying off; I want all the universities to do well and they are doing well, but Sheffield has leapfrogged them... And that something special is a much for small and medium sized firms as it is for the big players like Rolls-Royce and Airbus. During a later interview Greg Clark explained: “The good thing about the AMRC, and Made Smarter in particular, is the way they link up the big companies and the small companies, because actually there is no real conflict of interest between them. A company like Rolls-Royce, for example, wants to have suppliers that are just as sophisticated as it is, there is no point having a gulf between the two. So, disseminating that cutting edge technology, to small firms and start-ups through places like the AMRC is in the interest of the big firms, and that is the key insight of Made Smarter.” He singled out the role of Rotherham and Sheffield in driving advanced manufacturing in the UK. “We were just hearing from the University’s President and VC, Koen Lamberts, that Sheffield is now the top university in the UK for engineering research; and that is in a world in which the UK is at the top of the global league table,” he said. “So we are already highly competitive, and it’s brilliant that Sheffield has overtaken places like Oxford, Cambridge and Imperial on the strength of institutions like the AMRC. The AMRC has been a big boost to the University of Sheffield’s standing in engineering and it is great to see it paying off; I want all the universities to do well and they are doing well, but Sheffield has leapfrogged them and that is at the expense of other competitors internationally.

“The last time I was on this site was for the Boeing factory opening; now that it is hugely expanding, and you see that South Yorkshire has got the biggest jobs growth in the UK, since the 2008 crash. Despite Brexit, this area shows the rewards of doubling-up on advanced manufacturing; the creation of good, high-value jobs is visible to everyone; just think what we could do if we are able to remove this Brexit uncertainty in a good way. Anyone who comes to this site can see that there is real momentum here in Sheffield.”

Made Smarter is indeed being made real.

Where digital manufacturing meets construction
21/09/2018
It might seem a little odd that one of the world’s largest financial services c …
Contractor appointed to build AMRC North West
05/08/2020
The University of Sheffield has appointed Robertson to build its dedicated Advanced M …
Boeing begins construction on its first European production facility in Sheffield
12/09/2017
Ceremonial ground-breaking event held at the site of Boeing Sheffield, which will b …
Business gets its shot to manufacture new golf club thanks to help from AMRC
28/01/2022
A Preston-based business is teeing up to revolutionise the golf club industry, workin …