Madge and Bob turn on the speed for F1 team 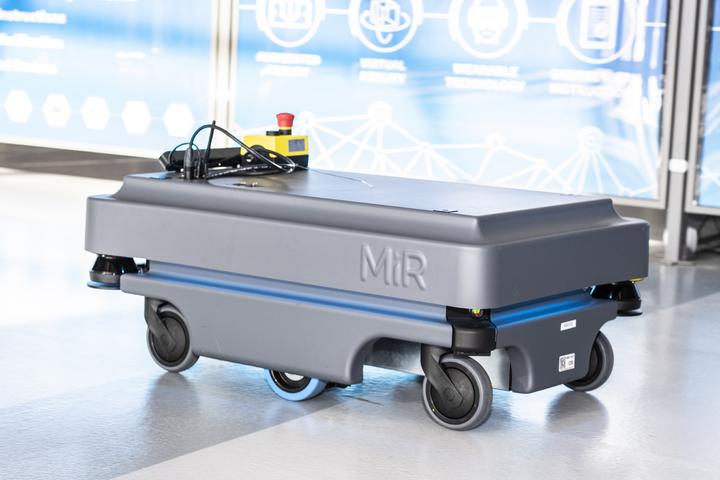 Meet 'Madge', one of the autonomous guided vehicles (AGVs) loaned by the University of Sheffield AMRC to Mercedes-AMG to assist with production of newly developed CPAP breathing aid devices.

Two fast-moving, agile robots named Madge and Bob have been racing around the Mercedes powertrain technology centre delivering every component to the Mercedes Formula 1 team manufacturing 10,000 breathing aid devices for Covid-19 patients, thanks to the University of Sheffield Advanced Manufacturing Research Centre (AMRC).

Richard Kasler, Automation Team Leader at Mercedes AMG High Performance Powertrains, said: “We had four MiR200’s in total, two from the AMRC and two from the MTC, and they have been invaluable in allowing us to make 10,000 CPAP devices in ten days with the least amount of people on site.

“The robots are quite incredible, they prevailed to great success by working 24 hours a day over three shifts for ten days, delivering every single device.

“One platform in particular was achieving about 20km a day on a 360m round trip through a labyrinth of narrow corridors and a very dynamic manufacturing hall.” The Mercedes-AMG High Performance Powertrains (HPP) technology centre in Northamptonshire - where the F1 team’s power units are developed and built – has been transformed into a production base for Continuous Positive Airway Pressure (CPAP) devices to help meet national demand for respiratory aids.

To support production, the AMRC and the Manufacturing Technology Centre in Coventry, each loaned two intelligent MiR200 autonomous guided vehicles (AGVs) to Mercedes-AMG HPP. This not only allowed CPAP parts to be safely and remotely transported around the facility’s ‘labyrinth’ of corridors but, crucially, it meant engineers on site were able to minimise contact with each other and maintain the necessary Covid-19 social distancing measures.

The four AGVS worked flat out in shifts, each covering up to 20km a day delivering components between locations across the site.

They have been invaluable in allowing us to make 10,000 CPAP devices in ten days with the least amount of people on site...The robots are quite incredible.

CPAP devices are in short supply in UK hospitals, so engineers at University College London (UCL) and Mercedes-AMG HPP worked around-the-clock to reverse engineer a device that could be manufactured by the thousands. The breathing aid was produced within a rapid timeframe – taking fewer than 100 hours from the initial meeting to production of the first device. The AGVs provided by the AMRC - affectionately nicknamed ‘Bob’ and ‘Madge’ after two service robots from TV comedy series Red Dwarf - were shipped to the F1 team’s technology centre by the Integrated Manufacturing Group (IMG) at Factory 2050.

IMG has developed new control techniques to improve the flexibility of these machines so they can perform tasks more efficiently and safely.

Chris Greaves, Head of IMG and Factory 2050, said it was great the team was able to use its expertise and equipment to help.

Chris said: “We received a call from Mercedes-AMG on a Thursday to ask if we had any AGVs that could provide additional support to those already loaned to them by the MTC.

“We knew they were needed quickly so two of our team, Tom Smith and Mark Hulley, jumped into action and got our two MiR200s ready and prepared. They were shipped and in production at Mercedes-AMG by the following Friday lunchtime.

“I’m really pleased and proud that we could do something to help.” The AMRC and MTC are both members of the High Value Manufacturing (HVM) Catapult research network, which is leading the national ventilator response - Ventilator Challenge UK - and has pulled together an industrial consortium including Airbus, GKN Aerospace, BAE Systems, Ford, Microsoft, Penlon and the Smiths Group to produce an additional 30,000 ventilators needed by the NHS.

As part of this effort, AMRC Cymru in North Wales has been turned into a factory producing components for the life-saving ventilators and the AMRC’s Prof Rab Scott and the immersive tech team has used programmed Augmented Reality headsets to train production line operatives, enabling safe distancing and access to remote expertise.

In addition to these activities, the AMRC Machining Group proved out components for the ventilators allowing the production line to hit the ground running, and the AMRC Design and Prototyping Group used 3D printing and laser technologies to supply clinician approved visors to Sheffield hospitals’ frontline NHS workers.