Making the most of a disruptive twin 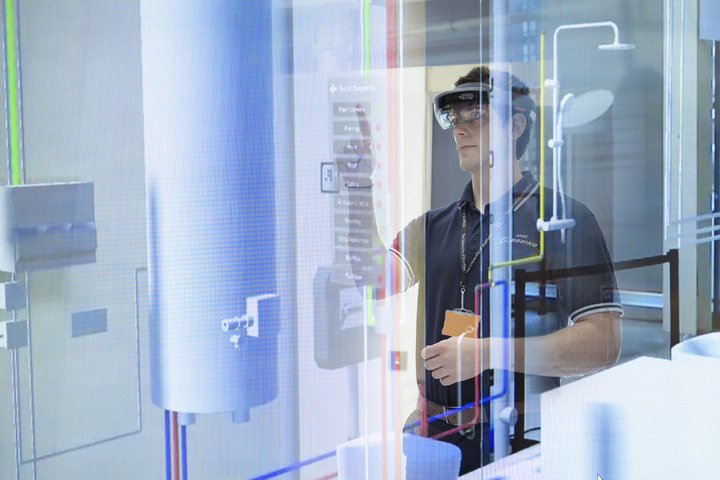 "The most digestible way to consume this digital information will be through an augmented experience." - Paul Haimes, PTC

An explosion in information streaming capability and cool-to-wear immersive technologies will have a hugely disruptive impact on global manufacturing over the next five years, according to a new report launched at the world's most influential media, entertainment and technology show, the IBC, in Amsterdam today (Friday).

The new report, Feasibility of an Immersive Digital Twin, which is published by the UK’s High Value Manufacturing Catapult (HVMC), was produced by a team of researchers within the HVMC who work at the cutting edge of manufacturing digitalisation, with a special focus on augmented reality and digital twins.

“Our report is the second in a series of studies that takes a forensic look at how immersive technologies, including augmented reality and digital twins, could dramatically change manufacturing around the world,” says Sam Turner, Chief Technology Officer at the HVMC.

“We know the digital twin market is going to grow to over $15 billion over the next five years, and that much of this growth will be in manufacturing applications. Here in the UK, the HVMC is not only making industry aware of the opportunities that these technologies open up, but also supporting them in developing the capability to exploit these technologies to the full.

“This opportunity includes the development of new business models with remote monitoring of equipment driving a move towards servitisation. It is also expected to speed up the rate of new product introduction, as better insights into how products are being used become more accessible.”

Based on detailed interviews and surveys of industrial leaders, the new report culminates in an in-depth interview between Jonathan Eyre, Digital Twin Lead at the University of Sheffield Advanced Manufacturing Research Centre (AMRC) and Paul Haimes, of the US-based, global IoT technology platform provider, PTC.

Haimes, whose firm has more than 30,000 global customers and 1,000 technology and service partners, says: “I think we are on the verge of some hugely disruptive phase, where somebody is going to come out with eyewear that is un- intrusive, cool from a consumer point of view, safe to use in an industrial context, and all of that, together with things like GPS locations and GEO-fencing, will be explosive in the five years, or as soon as a device comes around that is capable of delivering that.

“The data will be streamed to us based on our location, based on our role within the business, based on consumer buying habits from our general lives and so forth. All of that will explode in terms of the way we consume information.”

But the report’s authors question whether industry or policy makers are ready for this explosive and disruptive impact. Drawing on workshops, survey data, and detailed interviews with industry and thought leaders, the report concludes that there is still no agreed definition of a digital twin, its implementation or impact, and identifies the occasions in which immersion within a digital twin could add value.

“The report looks at the stages of the product life cycle that the digital twin offers greatest value, and its essential components,” says Professor Rab Scott, Head of Digital at the AMRC. “We also look at its wide range of applications from process monitoring and control to predictive maintenance and the more rapid introduction of new products.”

Haimes agrees. “When it comes to digital twin, the most common reference is maintenance and keeping assets running. For example, we are just doing some work with a forging company that has connected one of its forging lines that historically failed every three to four months.

“In that instance, through connecting the line and not having any machine learning ability here, the operators learned to understand the signals and the feeds coming off the line to the point where they were then able to spot where problems were developing with the clutch. They were then able to proactively fix the issue before a failure happened just in time rather than after the case. That is now saving them around $200,000 a year because that line has now been running for nine months without any failure.”

The challenge, however, is how to condition data so that it becomes valuable for the user. “It comes back to Steve Jobs with his phrase that simplicity is the ultimate complexity, “says Haimes. “The way in which we are able to condition data to deliver what is necessary is one of the key challenges of the Fourth Industrial Revolution that we are rattling towards now. And this report gives us a deeper understanding of that challenge.”

This report is one component of a larger project entitled Business Engagement in Immersive (BEiI) carried out by Immerse UK, the Digital Catapult, and the High Value Manufacturing Catapult (HVM Catapult), with funding from Innovate UK. The high-level ambition of this project is to advance the UK in the development and commercial use of immersive technologies and content.

SAS partners AMRC to drive manufacturing innovation
29/01/2020
Analytics and software solutions company SAS has become a tier one partner at th …
20/30 Vision: The future of the AMRC
27/10/2020
Smart, sustainable and resilient manufacturing beats at the heart of a bold new visio …
Early success for attempt to model robot milling dynamics
28/08/2015
Attempts to find a low cost, rapid method for optimising the operation of robots us …
School event inspires the next generation of engineers
20/03/2017
School pupils from across the Sheffield City Region enjoyed some hands on STEM activi …