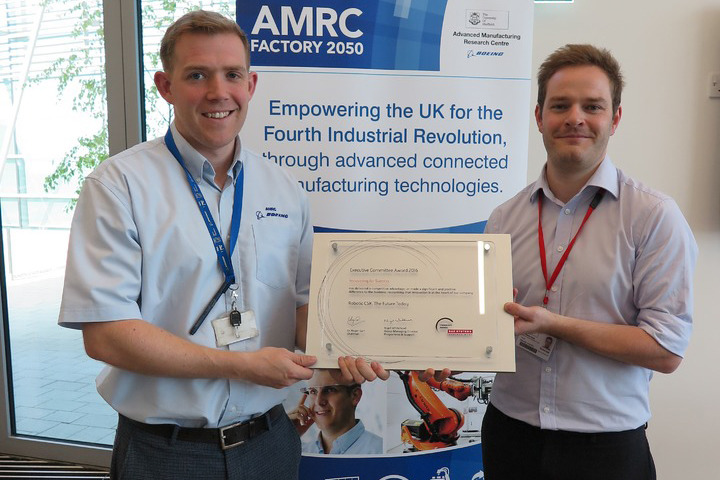 The University of Sheffield’s Advanced Manufacturing Research Centre (AMRC) has been presented with a national award from BAE Systems.

The award is to recognise the impact of a project that matured into a full production system and is on track to help the company achieve its affordability targets over the coming years.

The system includes the use of multiple robots to countersink high tolerance pre-drilled fastener holes. Non-contact metrology integrated with the machining robot locates pre-drilled holes and corrects the robot’s position before countersinking.

The project was awarded a BAE Systems ‘Business Leader Award’ in 2016 and thanks to its success, has now also been presented with an ‘Executive Committee Award’; a national award under the BAE Systems Chairman’s Awards Scheme.

The prestigious scheme recognises excellence in the successful exploitation of innovative ideas; and acknowledges the efforts and achievements of employees, partners and customers in delivering benchmark performance for BAE Systems.

Head of IMG, Ben Morgan, said: “The system is installed at BAE Systems in the UK, where it is being used to process a wide range of composite components for military aircraft, saving the company millions of pounds in capital and operational costs over the coming years.

“These awards are fantastic recognition of the research IMG conducts into developing robotic machining processes; by upgrading our robotic machining capabilities and harnessing the benefits of industry 4.0 technologies to mature new digital manufacturing techniques.”

Ben Morgan said IMG are developing the countersinking production system further so the technology will have the ability to evolve with trends within the Industry 4.0 sector: “Further development will enable processes monitoring and the analysis of big data to provide an understanding of the quality of the manufacturing process.”

Assembly & Systems Technology Lead for Manufacturing Technology at BAE Systems, Austin Cook, said: “The BAE Systems chairman’s award nominations are subject to a rigorous assessment process, with winners recognised as having made significant achievements or contributions to the business.

“Winning both the Business Leader and Executive Committee awards for the robotic countersinking technology reflects the outstanding efforts made by the entire collaborative team. This technology sets a new benchmark for BAE Systems manufacturing capability and the expertise within the Advanced Manufacturing Research Centre was core to delivering this to production.”

You can read a case study of the countersinking project here.

Zoe snaps up photography prize
19/02/2020
The University of Sheffield Advanced Manufacturing Research Centre (AMRC) is not only …
Shivan shines bright to win AMRC Training Centre ‘Apprentice of the Year’ title
04/03/2019
Innovation, passion and bringing fresh thinking into the workplace are some of the qu …
Composites Machining
01/09/2016
Date: 21st September 2016As industries such as aerospace, automotive and renewabl …
Access to world-class facilities at AMRC Factory 2050 made easier for SMEs with opening of new ‘reconfigurable factory’ research cell
30/08/2017
Ease of access to the world-class research and development facilities on offer at the …