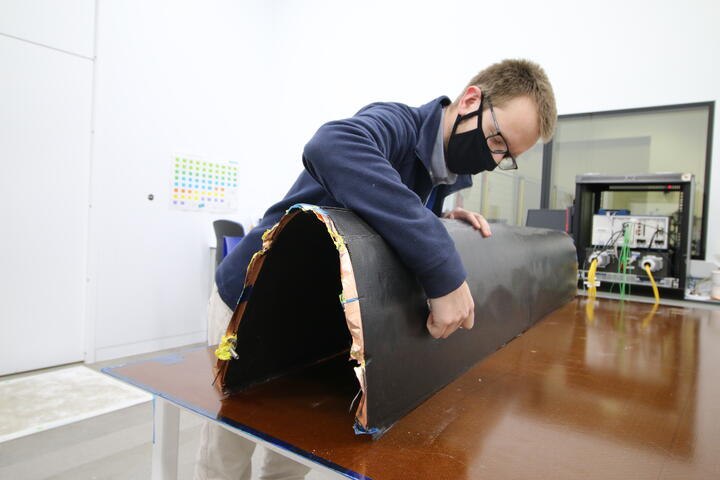 Research Engineer Matthew Collinson with a section of a composite leading-edge wing manufactured in the AMRC Composite Centre.

Composite researchers at the AMRC are at the heart of a European-wide project to develop self-responsive aerospace composites that will significantly reduce greenhouse gas emissions and production costs in the aviation sector as it works toward the goal of net zero by 2050.

The University of Sheffield Advanced Manufacturing Research Centre (AMRC) is partnering with 16 industrial partners on the MASTRO project, which is tasked with developing intelligent bulk materials for a smart transport sector as part of Horizon 2020, the biggest EU Research and Innovation programme ever with nearly €80 billion of funding available over seven years (2014 to 2020).

“There are three sections within MASTRO: automotive, infrastructure and aerospace; and the AMRC is leading the aerospace section of the project alongside Embraer. We’re developing three main technologies: self-cure, self-anti-icing and self-sensing,” said Matthew Collinson, Research Engineer in the AMRC Composite Centre.

The AMRC team are developing materials through the integration of carbon nanotubes – measured in billionths of a metre – which can be turned into smart products, and are now in a position to demonstrate the advances they have made.

“For the first year-and-a-half we’ve been working on developing the materials and so the next stage is developing the smart demonstrators. Now we’ve reached a point where we can build a section of a composite leading-edge wing – to show off the self-cure, self-anti-icing and self-sensing we have developed,” added Matthew.

The Boeing 787 is manufactured in the biggest autoclave in the world, but it is expensive, not sustainable and not practical to build these huge autoclaves.

The development of all three technologies centres on the electrically conductive nature of the composite structure, which is vital as the industry moves to more electrified aircraft, with the ultimate aim of one day being fully electric.

“Firstly, self-curing is a new manufacturing technique for these composites. Currently, they are manufactured in an autoclave but they can be slow and expensive to run. Running electrical current through the fibres of the composite to act as the heating element to cure the component can be cheaper, quicker and uses much less energy. It also complements our work on anti-icing,” said Matthew.

Another disadvantage of using autoclaves to heat composite structures, says Dr Betime Nuhiji, Technical Lead at the AMRC Composite Centre, is that engineers are limited by its size: “An autoclave produces high quality parts but it takes a lot of energy, a lot of time and you can only create a part that is as big as the autoclave.

“The Boeing 787 is manufactured in the biggest autoclave in the world, but it is expensive, not sustainable and not practical to build these huge autoclaves. The team has developed a heating system where a power supply is directly connected to the composite structure and a current is run through it; so it heats up, just like a heating element.

“There are so many benefits, but the main ones are low energy output and low equipment costs. There is also the close control of heating, because when you turn an oven off it is still hot, so you are still effectively heating the part; when you turn off the electrical system no more power is going through it.”

Matthew said similar technology is used to investigate self-anti-icing: “Currently, aircraft remove surface ice by drawing hot air from the engine to melt the ice, but this takes power away from the engine and is less efficient, so we have been developing an electrical anti-icing system that doesn’t require separate heating elements in the component.

“Linked to both these technologies is self-sensing, monitoring the electrical resistance of the part to detect damage. When you get barely visible impact damage (BVID), the resistance changes so you can monitor that and detect where the damage is. BVID is something the aerospace industry is very interested in because it is very difficult to detect through visual inspection, which they currently do, on composite structures.”

Matthew said to enable these smart functionalities, it has required some development of the resin: “Within a composite, the fibres are extremely electrically conductive but the resin is electrically insulating. Part of the project to develop these bulk materials is to make the component more conductive by mixing carbon nanotubes into the resin, so that the whole part is conductive, not just the fibres.

“Doing that should enhance every aspect of the MASTRO project. The self-curing and the anti-icing will perform better because the heat is distributed more evenly. And then we will also get increased response in damage detection because, again, the whole composite is conductive rather than just the fibres.”

Betime said the challenge now is creating panels that replicate how they would need to be used in a real-world environment, on the leading-edge of an aeroplane wing.

“At the start of the project we conducted lots of trials on smaller panels to optimise how to detect damage and cure effectively. Now we need to upscale as the final demonstrator we want to show is the leading-edge, which is two metres long,” said Betime.

We have been delayed but we have now manufactured our first self-curing, self-anti-icing and self-sensing part and can start testing very soon.

Matthew said the Covid-19 pandemic has meant work on the MASTRO project has had to slow down briefly over the summer, but a physical demonstration of the ground-breaking work they have been conducting is imminent.

“We started the latest work package at the start of 2020, which was making the two demonstrators – which have slightly different properties, then finishing the design and starting to manufacture.

“We have been delayed but we have now manufactured our first self-curing, self-anti-icing and self-sensing part and can start testing very soon.”

The EU 2020 Strategy states that Europe needs to turn into a smart, sustainable and inclusive economy, based on knowledge and innovation. Horizon 2020 is the financial instrument of the Innovation Union, a Europe 2020 flagship initiative aimed at securing Europe's global competitiveness, driving economic growth and creating jobs.

This project was funded by the European Union’s Horizon 2020 research programme under grant agreement No 760940, under the project titled MASTRO. The AMRC is part of the High Value Manufacturing (HVM) Catapult.

Elcomap: biocomposites for high-performance vehicles
01/05/2014
The AMRC Composite Centre worked with two specialist engineering companies to develop …
The language barriers of digital twins
19/10/2021
The University of Sheffield Advanced Manufacturing Research Centre (AMRC) is joining …
Making things smarter in the North
25/02/2019
Keith Ridgway and Juergen Maier will be centre stage at the Great Northern Conference …
Snowflakes sparkle for children’s charity
19/12/2019
A sparkling display of snowflakes lighting up the University of Sheffield Advanced Ma …