Pressing ahead with rehab revolution 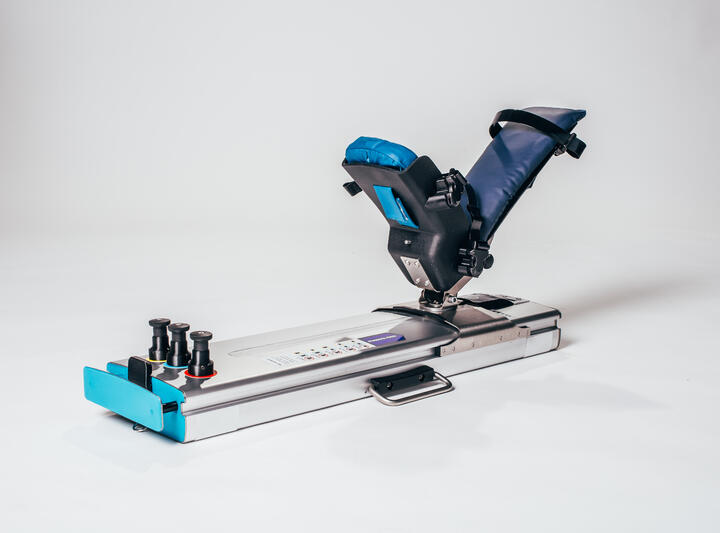 A physiotherapist’s medical innovation that could transform the rehabilitation of elderly patients has moved closer to large-scale manufacture following a design intervention from the University of Sheffield Advanced Manufacturing Research Centre (AMRC) which reduced the overall weight and cost.

“The changes specified by the AMRC team were exactly what I had hoped for and will make a big difference,” said Jen Turner, who founded Sheffield-based JT Rehab in 2016. “The weight has reduced by 11 per cent and the cost of manufacturing for three components was cut by a combined 73 per cent.”

Jen, a physiotherapist working in older peoples’ rehabilitation, established JT Rehab after becoming frustrated at a lack of equipment available to strengthen patients’ leg muscles while staying on hospital wards.

“Most hospital patients spend about 80 per cent of their time in bed where muscle strength can decondition by about 20 per cent in the first week. It is a massive problem, particularly for elderly people who have a low level of physical ability anyway,” said Jen.

“I wanted something elderly patients could start using early in their rehabilitation that was affordable and simple to use, but effective in strengthening muscle through resistance.  It also had to comply with all the stringent NHS safety standards and no devices like that exist, so I decided to do something about it and that’s where I came up with the idea of the S-Press, which strengthens the muscles of patients with leg problems by providing a means of exercise in bed.”

Most hospital patients spend about 80 per cent of their time in bed where muscle strength can decondition by about 20 per cent in the first week. It is a massive problem.

Funding was secured from the Design Council, Sheffield City Council and Versus Arthritis to create a prototype for a machine which uses a spring and pulley system to allow a patient to slide their foot up and down with varying resistance, from 3kg to 20kg. Electromyography (EMG) testing proved the progressive resistance works every muscle in the leg.

JT Rehab is a member of Sheffield Hallam University Advanced Wellbeing Research Centre’s (AWRC) Accelerator scheme, one of 20 University Enterprise Zones launched with a £20 million investment to increase the likelihood of, and reduce the timescales for, innovations to be brought to market through intensive testing and development.

AMRC engineers provide mentoring to businesses on the AWRC Wellbeing Accelerator and it was through the programme that Jen was introduced to design experts in the AMRC’s Design and Prototyping Group (DPG). They were asked to conduct a design review of the manufacturing routes of the high-value components, provide alternatives to the manufacturing processes used and to suggest potential improvements.

Jen said: “My prototype was nine kilograms, which is fine to carry for short distances, but too heavy to carry any further. I asked the AMRC to lessen some of the weight and explore different ways of manufacturing the parts to bring the cost down.”

Peter Oates, ‎Senior Design and Development Engineer, analysed the S-Press piece-by-piece and reviewed how each component’s design could be optimised.

“Some elements weren’t worth changing as Jen was already committed to a certain manufacturing route. But a lot of things could be changed relatively simply and cheaply,” said Peter.

“Some of the sliding blocks were really finely machined and were costing a lot of money, so we suggested 3D printing them. For a couple of the designs, we did quick prints for Jen to try out to see whether it would work. For other parts, I calculated the costs and prices for either 3D printing them or making an injection moulding tool, depending on the quantity, and presented it to Jen.”

The AMRC is part of the High Value Manufacturing (HVM) Catapult and the five-day assist project was paid for using funds from the HVM Catapult as part of a commitment to working with small and medium-sized manufacturers.

Jen has applied the AMRC’s suggestions on three components for the S-Press: the main slider, the internal slide, and the handle.

“The main slider was originally machined acetyl, which was costing £47.34 a unit, but using the AMRC recommendation we’re now 3D printing two runners and combining them with an off-the-shelf element which has a total price of £19.20 a unit,” said Jen.

Some elements weren’t worth changing...but a lot of things could be changed relatively simply and cheaply.

“The internal slider was again machined acetyl at £29.58 a unit, but Peter proposed laser cutting plastic. The component slides up and down, so it needs to be smooth; the plastic is not quite as smooth as the metal original, but it is £2.87 per unit to produce and lighter - so it is definitely smooth enough.

“Lastly, the original steel handle was 245g – three per cent of the total weight – and £12.43 a unit. Peter presented us with four alternatives, and we are now using an option similar to those on suitcases that weighs 70g and costs £3.38. With that component, we hadn’t really thought much about it, but changing it makes a significant difference.”

Those manufacturing changes will be implemented when the S-Press goes to large-scale manufacture once it progresses through nine months of trials.

“One of the mentors on the AWRC Wellbeing Accelerator programme is the innovation lead at Northamptonshire Healthcare NHS Foundation Trust and he is very excited about using the S-Press in four community hospitals in a feasibility and efficacy study,” said Jen.

“Sheffield Teaching Hospitals critical care team also want to trial it; that will be good to see what a difference it can make for people who can’t get up at all.

“They say it takes seven years to get innovation into the NHS and it’s been a long, long road. But I’m convinced it will be worth it.”