No limits with degree apprenticeships 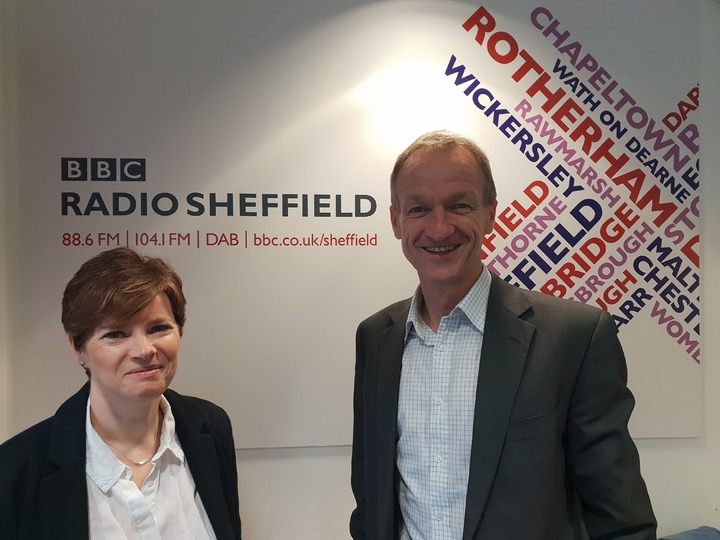 Head of degree apprenticeships at the training centre, Louise Cowling, and Wyn Morgan, Vice President for Education at the University of Sheffield.

Degree apprenticeships have blown a hole in tradition when it comes to choosing routes into higher education – that was the message from the AMRC Training Centre for a special BBC Radio Sheffield show about studying at university.

Head of degree apprenticeship at the training centre, Louise Cowling, was invited to the Shoreham Street studio as part of a Universities Week special broadcast to talk about apprenticeships as an alternative to traditional university courses.

Radio host Toby Foster said he had visited the University of Sheffield Advanced Manufacturing Research Centre (AMRC), describing it as ‘stunning’ and an ‘amazing place to be’ but wanted to know why people would choose to go to the AMRC Training Centre instead of university.

Louise told him: “For some people, full immersion into university life is not for them, and some people like to learn and apply their learning to what they are doing in their day job. Some find it easier for them if they’re doing academic study and putting it into practice at work and can see why they’re doing it and what the benefits are.”

Louise was joined in the studio by Wyn Morgan, Vice President for Education at the University of Sheffield, who said the university and training centre had blazed a trail for providing apprenticeships.

He added: "We very much want to reflect that lots of people want to go through different routes and offering the apprenticeship programme is a way to attract people who don’t want to study necessarily or don’t want to get into debt, and therefore it’s a way to offer opportunities that are based on our teaching skills and our tradition.”

Louise pressed the point that while apprentices may start as a small cog in a bigger wheel - by the time they reach the end of their degree they are leading parts of a project, or leading a project.

She said: “We have got students who are making savings, increasing production for their unit or industry - so I think for them it’s that sense of achievement that they are making a real difference and they are getting those transferrable skills and work-based skills and they can see their progression in work. So they are not worried about getting a job at the end because they have got one sorted at the beginning and they can see their progression through their career.”

Louise said degree apprenticeships mean possibilities are no longer limited when it comes to choosing a route into higher education.

“It’s not one or the other,” she said. “We also upskill. There are people who have been working in their organisations for a long time and their employer really values them and just thinks if they get that bit more education they can use that in the workplace and develop.

“It’s for people who perhaps left education at 16 or 18 and didn’t want to go to university then, have looked at graduates coming in and thinking ‘well I can do that, they are no more better or special than I am’ and can go back on that flexible route and get their degree.” Beth applied to go to university after her A-levels but decided the apprenticeship route better suited her career choice and went on to do her apprenticeship at the AMRC Training Centre, starting with her BTEC and NVQ Level 3 before moving through to, and now in the process of finishing her final year, an apprenticeship-funded bachelor’s degree.

She said: “I was 18 when I started this apprenticeship and I’m 23 now so it’s taken about five years and taken a bit longer than if I had gone straight through university but there’s now the capabilities to go straight on to degree level apprenticeship so I could have got it done in the same time frame (as a traditional degree course).”

Beth said the advantages of taking the apprenticeship route, as opposed to going to university, is while her peers who finished their degrees last year have to go out and look for a job and find some experience – she already has five years’ experience, has progressed through the ranks within company and career, at the same time as gaining her qualifications.

In addition to that she is debt free.

To find out more about the advanced, higher and degree apprenticeships offered at the AMRC Training Centre, visit www.amrctraining.co.uk. Applications are being accepted now.