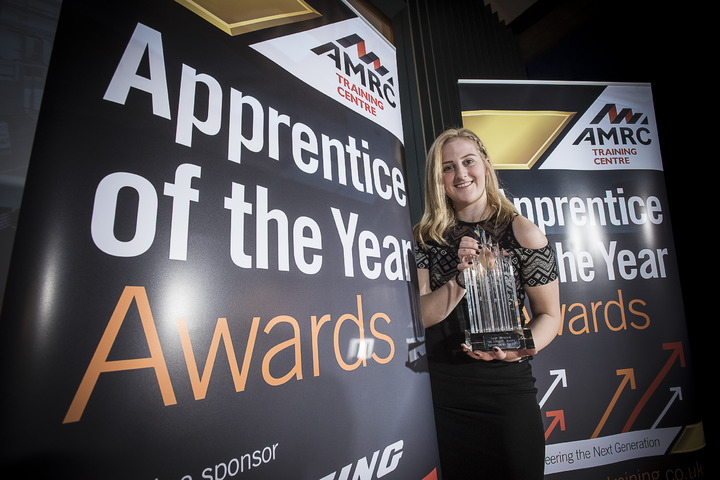 A successful apprenticeship is about having the right attitude; I always take any opportunity the AMRC Training Centre has given me” – Leigh Worsdale.

As we approach the AMRC Training Centre’s Apprentice of the Year Awards in May 2018, we take a look back over the last year with 2017 winner, Leigh Worsdale.

From media appearances, to job offers from around the world and starting the journey to becoming a young apprentice ambassador, the last 12 months have been a whirlwind for the AMRC’s first female Apprentice of the Year and heavy duty diesel engine builder, Leigh Worsdale.

When asked what the highlight of her year is however, she will tell you that what gives her the most satisfaction is knowing she is contributing to the success of her employers, Chesterfield company Foxwood Diesel:

“Seeing my company grow and the changes I’ve been able to make to a small developing business has been my highlight, I feel like I’ve played a big part in building the business up.

“I started off improving health and safety standards, ensuring the working environment was clean and went onto change manufacturing systems to make them more efficient and effective; cutting cost, reducing waste, improving stock control and time management. Employing these kinds of process improvements really affects not just the working life of the staff, but productivity as well.”

It is this kind of forward-thinking and dedication to her workplace that landed Leigh the coveted title of ‘Apprentice of the Year’ in the AMRC Training Centre’s 2017 ceremony, held at the University of Sheffield. The judges were ‘overwhelmingly’ impressed by Leigh’s confidence and spoke about how she continuously seeks ways to improve her workplace and its processes.

The jewel in the crown of her award-winning year was her trip to the USA hosted by Boeing, where Leigh enjoyed a tour of the aerospace giant’s sites in Los Angeles, Portland and Seattle - learning more about the world-renowned manufacturer as her prize for winning Apprentice of the Year. Leigh never expected her award to bring her so much attention: “The awards just kept on coming this year; it’s been an amazing experience! It’s great to have your achievements recognised in that way, especially by Boeing.

“I was also invited to demonstrate Industry 4.0 technologies to Members of Parliament at a High Value Manufacturing Catapult event at the House of Commons; it’s a big honour to be seen as a representative for the AMRC Training Centre.”

These events sparked a unique opportunity to work with the Young Apprentice Ambassadors Network. Leigh will now be a figurehead for engineering apprenticeships in the Yorkshire Region and share her passion for engineering with young students.

Ellen Messias, Project Director for the Young Apprentice Ambassador Network, said: “We will be supporting Leigh to engage with students, parents and teachers to inform them about the higher educational options available within apprenticeship training.

“Leigh is perfect for this role as she speaks so passionately about her work and is so committed to her apprenticeship. She is well placed to help support young people to make informed decisions about their future.”

Leigh is now an experienced ambassador; she has appeared throughout print and broadcast media, becoming the face of successful apprenticeship training in the Sheffield City Region.

In January 2018 she was interviewed on BBC Radio 4’s flagship Today programme which was broadcast across the nation from the AMRC Training Centre and she will soon be represented in a series of short films highlighting outstanding early career professionals for the Great Exhibition of the North.

Looking back on her year, the evidence is clear to Leigh that all her hard work is paying off: “I’ve had so many opportunities come my way and received job offers from all around the world, which shows just how much opportunity there is out there for young people doing apprenticeships.”

Leigh’s apprenticeship has given her grand plans for the future and she is now furthering her higher education by completing her Level 4 HNC studies. She is also pursuing training opportunities to diversify her skills and knowledge of modern engine technologies:

“I would like to travel, so gaining more qualifications will be imperative to allow me to take advantage of opportunities abroad, having all those contacts from job offers will come in useful!

“A successful apprenticeship is about having the right attitude; I always take any opportunity the AMRC Training Centre has given me, any extra training I sign up for. I tell people that the AMRC will give you the skills to go as far as you want to go in life. I wouldn’t be the person I am today without my apprenticeship.”

For the time being however, she is invested in company life at Foxwood Diesel, using her knowledge to focus on improving manufacturing systems and costs: “I feel my apprenticeship has been so successful; I want to spend time seeing what other improvements I can make. Seeing a small 10-person business grow due to the effect of the new ideas you can bring in is immensely rewarding.”

“I would simply not be able to have that experience with a purely academic degree; my apprenticeship training allows me to gain real valuable skills that are in demand from industry. When you learn something new you can apply it to your job straight away, therefore gaining more of an understanding for what you are doing.”

Ken Worsdale, Director of Foxwood Diesel knows the value of apprenticeship training: “Foxwood Diesel has a long history of employing apprentices over the years and in fact, everyone currently working at the company started their career as an apprentice.

Working with the AMRC Training Centre has improved our standards not only as a business, but as a team as well and Leigh has been the connection by adding new and improved systems and procedures.

“Leigh is not only a skilled engine builder but her business knowledge has improved dramatically since starting with us as an apprentice and her next step at Foxwood Diesel is to become a mentor by showing other staff how to work with the systems she has developed and installed.”

“Do it! Anyone can be successful, my story isn’t unusual, I just work hard and I am given the right focus. I still feel like there is still a stigma to undertaking an apprenticeship, but now things are changing and the benefits, not just for the young people but for their companies and UK industry, are finally being seen.

“Apprenticeships really do make a difference to the lives of young people, I am evidence of that!”

AMRC Cymru tests revolutionary new safety rein
23/05/2022
Engineers at AMRC Cymru have helped to develop and test a revolutionary new rein for …
Shivan shines bright to win AMRC Training Centre ‘Apprentice of the Year’ title
04/03/2019
Innovation, passion and bringing fresh thinking into the workplace are some of the qu …
House of Commons visit for the University of Sheffield's AMRC apprentices
27/06/2017
The High Value Manufacturing Catapult (HVM Catapult) event was the launch of the HV …
Digital manufacturing experts help IT firm boost productivity and reduce waste
18/05/2022
A Burnley-based IT business has received a boost in ‘confidence and financial s …