‘The time is now’ for manufacturers to go digital 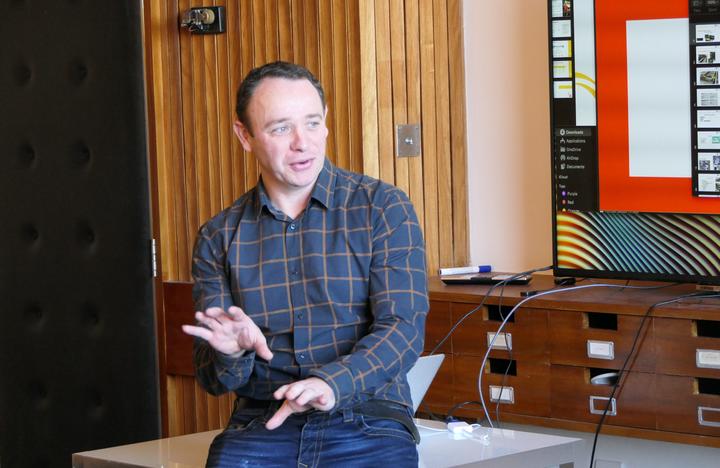 You wouldn’t expect one of the men leading the charge in Sheffield’s digital manufacturing crusade to have run racing teams, played saxophone with Supertramp and be a former Young Jazz Musician of the Year finalist, but then Jamie Hinton isn’t like most CEOs.

The father-of-two founded his digital tech company Razor in January 2009 with co-founder, Steve Trotter, initially as a side project after flirtations with the music industry, the British Racing and Sports Car Club (BRSCC) Championships and one of Sheffield’s earliest web agencies, Technophobia.

Now in charge of 24 members of staff at their offices on Sydney Street, Jamie is unwavering in his aspiration for Sheffield’s future: “I want Sheffield to become as well known for digital manufacturing as it is for steel. Like the forges we still have in parts of Sheffield, I want digital tech companies to be spilling out of the city so that it breeds into Leeds, Manchester and Newcastle to create this powerhouse in the north.”

When it comes to working with manufacturing firms though, those inspiring words come with a warning: “A lot of it is out of our control, we need manufacturers to embrace what we have to offer them. We are here, we are excited, we want to work with them, but it is up to them to take the challenge on. It’s never too late for any manufacturer to embrace digital technology, they can catch up and even leapfrog their competitors, but the time to act is now.”

Many businesses are just scared of failure. A lot of the challenge for us is getting rid of that fear and convincing manufacturers that they don’t need to be terrified of change.”

It is almost the polar opposite of our attitude at Razor because we don’t have a great fear of failure. We love taking on challenges and if it goes wrong, we pick ourselves up, learn from it and choose a different path. If you can’t take failure, you won’t last five minutes here.”

The mind-set of Razor comes directly from Jamie, which itself is born out of his time playing the alto saxophone, racing cars and working at Technophobia.” As a teenager I was always fascinated by engineering. One summer we took an old Fletcher speedboat hull, stuck a Hollis jet drive and a Suzuki Swift engine inside, and then tested it on the canal in Sheffield. I just loved creating things and doing the stuff people said we couldn’t.”

Boats progressed to cars and a job, when he was 18, as a mechanic for a racing team: “We ran open-wheel single seaters in the BRSCC Championships. It was a fantastic life lesson for me, it built that mind-set of ‘it is ok to get it wrong, let’s try something else and get it right’.”

Being a finalist in the Young Jazz Musician of the Year prize led to a degree in music technology at the University of Sheffield, playing with 70s rock band Supertramp, jamming with the Ronnie Scott Band and even releasing dance records.

Eventually, after suggestions from his future wife to ‘get a proper job’, Jamie found himself doing a masters degree in multimedia and internet at Sheffield Hallam University and, in 2005, securing that ‘proper job’ as a junior uploader at Technophobia.

There is a humble brilliance of manufacturers in Sheffield and we wanted to amplify that by pushing the boundaries.

“Working with computers is a lot like engineering in that you are creating something and immediately making a difference. There were some incredible people working at Technophobia and the mentality was always people first. We never did the easy stuff, if it was easy we considered it boring; we wanted the hard challenges and the culture was ‘let’s get things wrong, but just like anything, with practice, became really good at them’.”

Never one to sit still, Jamie took on freelance work in his spare time, first helping a small model business in Heely to digitally transform, then a branded golfing manufacturer in Meersbrook. In 2014, with the help of business partner Steve Trotter, Jamie took Razor full time, moved into Sheffield Tech Parks and employed their first member of staff.”

Even then we weren’t interested in just doing websites, we realised pretty early on that we loved helping people fight the big boys; in a way, help them, with technology, become real challengers and better than they could ever imagine. There is a humble brilliance of manufacturers in Sheffield and we wanted to amplify that by pushing the boundaries.”

Fast forward just six years and Razor has become, by reputation, one of the go-to places for businesses seeking digital transformation. A team of software engineers, usability designers, data scientists, testers and project managers help businesses prosper through delivering leading edge technology. That technology could be machine learning, mobile apps, integrations or software engineering and everything in between, but in many cases it doesn’t exist and needs to be invented. "We ask businesses about their objectives, their strategies and their problems and then we go in and we explore. We might find a couple of things we can work on, do some research and explore some other sectors, then we think about what technology could fix those issues.

“What we always boil it down to for businesses is something that is possible technically, achievable financially and gives them the biggest returns. Then we make a prototype for them - it could be a machine learning model or a mobile app, the possibilities are endless.

“What we want to present companies with is something tangible, which they can make a business case from, present to their board and hopefully come back to us asking: ‘Where do I sign?’.”

Razor’s mission statement, to ‘stay on the bleeding edge so our customers don’t have to’, is so aligned with that of the University of Sheffield Advanced Manufacturing Research Centre (AMRC), that collaboration on the Digital Meet Manufacturing (DMM) campaign was inevitable.

DMM is the AMRC’s programme to connect the Sheffield City Region’s manufacturing and digital sectors in a way that benefits both, but Jamie says what is currently holding it back is manufacturing firms’ reluctance to change their ways.

Bigger firms get it, they have profitability and the time to invest in new technology, but I see a huge amount of fear from smaller firms.

“A lot of businesses know they need to do something different, but have no clue what it is. They are on top of a cliff surrounded by fog and because they can’t see where the route is they are paralysed by fear. What we want to do is raise that fog and give them clarity to know what direction they need to take.

“Bigger firms get it, they have profitability and the time to invest in new technology, but I see a huge amount of fear from smaller firms. If smaller companies, with smaller margins, are going to make an investment like this it has to work, they need guarantees which we can’t offer them, so they end up doing nothing which could result in them failing to exist.

“There is also an element of entropy, the old boys saying ‘we have always done it this way’, and that is where the messaging and the language we use is so important. If we tell manufacturers we are going to turn their worlds upside down, they’re going to dig their heels in, but if we say we want to make what they do even better, they might be more receptive – it’s the psychology.

“It comes back to fear and us removing that fear. Some manufacturers might want a cobot, some might need automation on the shop floor, but others might see just as much benefit in their back office by automating their purchase orders.”

The commoditisation of digital technology, says Jamie, means that concepts like the Internet of Things (IoT) and Industry 4.0, which were once far too advanced and expensive for small manufacturing firms to consider, are now very much within their grasp. But he’s warned that the opportunity needs to be grasped.

“It is not too late for any manufacturer but now is the time to strike. Other people have gone through the pain of testing out these technologies, so there is the opportunity for companies to start now and leapfrog their competitors. Because of the commoditisation, it is a lot more financially viable and businesses can take a few more risks because they can learn from others.

“The ball is in the manufacturers’ court though; what happens next is up to them.

“DMM has massive potential to transform this area but we need some smaller manufacturing companies to put their head on the block and take a risk; once one does the rest will follow. It comes back to that fear, no one wants to be the first to go for it. I know these companies have a lot to lose by investing in digital technology, but they have a lot to lose by not doing it as well.”

Jamie is not only incredibly passionate about energising the manufacturing sector with Razor, he wants more companies to take on the challenge as well so that Sheffield can become that ‘powerhouse of digital manufacturing’ he desperately wants to see.

“We are not scared by competition, we relish it. It keeps us on our toes and keeps us pushing. As I see it, the more people who can talk to manufacturers and make that difference, the better. The more people we can get on the bandwagon, the faster it is going to grow.

“When people look at knives and forks and see the ‘Made in Sheffield’ mark they know it is of a certain quality. I want people to look at a digital manufacturing firm, see that it is based in Sheffield and think ‘they know what they’re doing, these guys can help my business’.”

This story features in the latest issue of the AMRC Journal. To download a copy please click here.