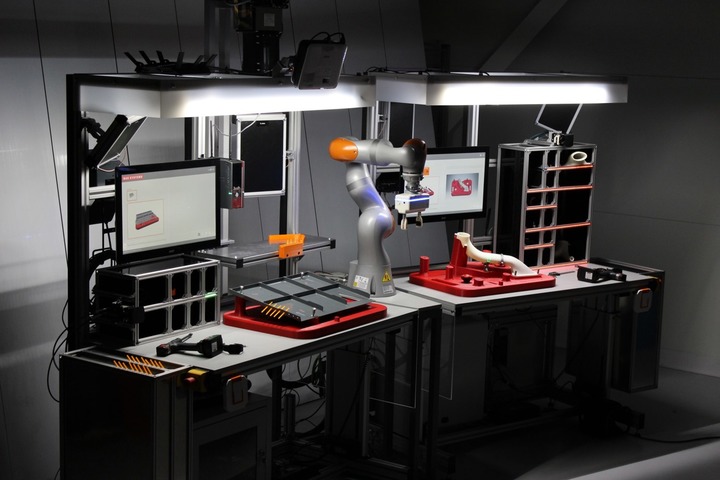 Factory of the future: The 'cobotics' workstation which was unveiled at Farnborough International Air Show as part of BAE Systems’ exhibition, Aerospace 4.0.

Aerospace giant BAE Systems is to trial a collaborative robot workstation driven by technologies integrated and tested by engineers from the University of Sheffield’s Advanced Manufacturing Research Centre (AMRC).

A team from the AMRC’s flagship Factory 2050 site, home to the Integrated Manufacturing Group (IMG), has worked with BAE to develop a ‘cobotics’ workstation which is being showcased at Farnborough International Airshow this week.

The workstation, a key feature of BAE Systems’ factory of the future, is fitted with a range of digital technologies and will be piloted at its Warton site in Lancashire to work safely and seamlessly alongside manufacturers building cutting-edge combat aircraft.

The technologies that have been developed – including operator recognition and a sensor-enabled cobotic arm – will be tested on a production line by the end of this year, marking the latest step in BAE Systems’ strategy to continually invest in and enhance its manufacturing capabilities to deliver the aircraft of the future.

The workstation was unveiled at this year’s Farnborough International Air Show as part of BAE Systems’ exhibition, Aerospace 4.0, alongside other manufacturing technologies such as reconfigurable, multifunction technology, 3D printing, augmented reality and manufacturing autonomy.

Following the show, the technology will return to the AMRC for further development before it is piloted in BAE Systems’ combat aircraft facility in Lancashire.

AMRC Senior Project Engineer with IMG, Ben Fisher, said: “Working with BAE Systems, the AMRC has been able to integrate and demonstrate a range of digital assistive technologies ranging from projection systems through to kit-by-light systems, into an intelligent workbench platform.

“This has provided BAE with an industry 4.0 connected workstation with which to demonstrate, state-of-the-art assistive manufacturing techniques. The AMRC will be furthering the capability of the workstations post-Farnborough International Air Show, with additional upgrades due to be implemented.”

BAE Systems worked with the AMRC to develop and test the advanced kit and collaborated with other partners including Siemens, which is providing the MindSphere software. This software will connect technologies through the workstation and output manufacturing data that will help engineers analyse and improve the advanced manufacturing processes.

Dave Holmes, Manufacturing Director at BAE Systems’ Air business, said: “We’ve only really started to scratch the surface of what automation can do in industry and some really exciting possibilities are emerging as we enter the fourth industrial revolution.

"Cobotics is the next, natural step in developing manufacturing technology that will allow for a blending of skilled roles. We envisage that people will make larger, more strategic decisions while delegating the repetitive and intricate aspects of production to a robot.

"Through the factory of the future technology, automation will empower employees to work safely at greater speed and with maintained accuracy, leading to increased productivity and quality.”

Robotics is already an integral part of BAE Systems’ combat aircraft production line which includes a high level of automation, but the integrated sensors that feature in the workstation make it the next step in people safely working directly with robots.

The technology will allow a worker to make strategic decisions while delegating repetitive, machine-driven tasks which require consistency to the cobotic arm. This will allow engineers to focus on highly-skilled tasks, adding greater value to the manufacturing process.

Another smart feature is a ‘skills passport’ that recognises operators and automatically loads optimised individual profiles using wireless technology - delivering tailored cues and instructions suitable for an operator’s level of expertise to guide them through practical tasks. This allows employees to work at a greater pace, with increased accuracy. The workstation also boasts for light-assisted assembly, with ‘pick by light’ technology prompting the user towards the correct components or consumables during the manufacturing process.

North West motor trade business goes digital with AMRC support
21/07/2021
Diverse Automotive Technicians (DA Techs), a rapidly expanding motor trade repair and …
Valued AMRC board member retires
13/11/2014
The AMRC with Boeing said farewell to board member Frank Brinken from Starrag yesterd …
Engineering Extravaganza excites region's youngsters about the possibilities of a career in manufact
15/03/2016
Pupils from schools across the Sheffield region and surrounding area have risen to …
The AMRC A-Team ladies Race for Life
14/04/2015
The fondly known 'AMRC A-Team ladies' are taking part in a 5K Race for Life on the 17 …