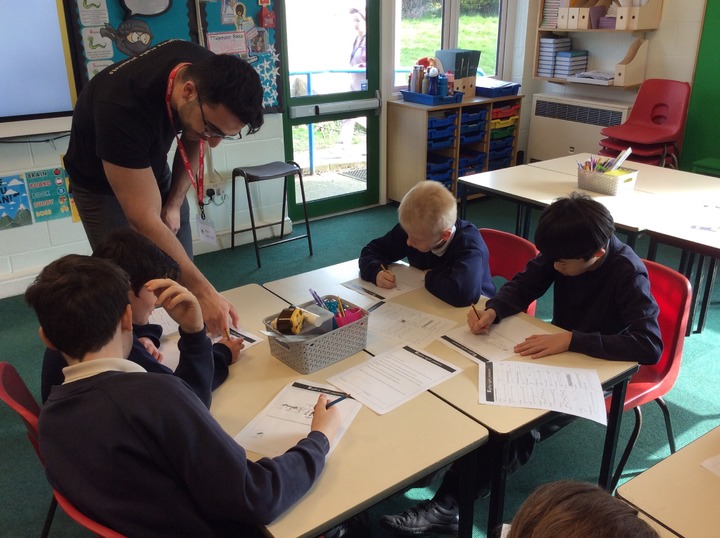 Class act: Saeed Rajabi, AMRC graduate engineer, working with Brockwell pupils to refine the school's designs that were chosen to be part of the 88 Pianists record attempt.

Schoolchildren who invented whacky extendable mechanical fingers for a record-breaking attempt to have 88 young musicians playing the same piano have been busy refining their designs with the help of AMRC engineers.

Pupils at Brockwell Junior School in Chesterfield are working with University of Sheffield Advanced Manufacturing Research Centre (AMRC) engineers to bring their imaginative designs to life, which were chosen from 2,200 entries from around the country to be part of the world record attempt taking place later this year.

The youngsters pushed the boundaries of creativity to come up with the ‘Metal Cog Thingie’ and ‘Scissor Jack’ designs, which will make up the final ensemble of 88 mechanisms used to play each note and smash the current record of 21 people playing the same piano.

To make sure Brockwell’s designs don’t strike a duff note, the children spent the day working with AMRC engineers to figure out exactly how the mechanisms will work in practice. Saeed Rajabi, AMRC graduate engineer, said having helped the budding engineers come up with their original designs, it was great to go back to the school and further develop their inspiring ideas.

“We congratulated the school for having two wonderful winning ideas that will be used in the final 88 Pianists’ world record attempt,” he said. “We spent most of the day trying to further develop these two designs.

“We needed the pupils’ help in overcoming some challenging problems such as working out which parts of the designs are essential to play the piano and which are decoration.

“We also needed to work out how it will stand up, stay still and fi­t into the space, how we can make it and ensure it is easy to play, what sort of musical effects the mechanism can create, and, importantly, what could go wrong and how can we can stop this from happening.

“The day was very productive and the students were very committed to helping us come up with amazing ideas that will help us build and assemble the mechanisms.

“We can definitely see some bright future engineers and musicians at Brockwell Junior School. We will be visiting them again very soon as we will be needing their help assembling and decorating the mechanisms.” The children completed a special handbook that Saeed and other engineers will use to make sure they order the right materials and machine the right parts to build the mechanisms. Once finished, Saeed and the AMRC team will go back to the school to assemble the parts and bring the designs to life.

Once built, Brockwell and other schools’ finished finger extenders will be taken to Birmingham where 88 young piano students will be taught how to use them to play a newly commissioned piece composed by Martin Riley and conducted by Julian Lloyd Webber.

The ‘88 Pianists’ project is the brainchild of University of Cambridge Professor of Engineering and the Environment, Julian Allwood, who wanted to both mark the 500th anniversary of Leonardo da Vinci’s death and answer a simple question: has the smart phone killed invention?

To find the answer engineering researchers at the AMRC, and seven other universities, were challenged to support Key Stage 2 children from across the country to ‘fuse science and art’ and beat the current world record. The attempt will be made at the opening ceremony of the 69th CIRP (The International Academy for Production Engineering) General Assembly on August 19 in Birmingham.

Senior Technical Fellow, Dr Erdem Ozturk, who is conducting the AMRC’s contribution to the project, said: “There is potential in every child to be an inventor. Our role is to unlock that inventive, problem solving impulse and to challenge perceptions about engineering in the classroom: and what better way to do that than by combining science, technology, engineering and mathematics (STEM) with art and music.

“As engineers at the AMRC, we have the opportunity to be great STEM ambassadors, and we are keen to help foster the children’s sense of creativity by showing that seemingly different subjects like music and engineering have something in common: creativity.

“It will be great to go back to the schools and help the children manufacture the winning designs, getting them involved in the process from start to finish will give them a real sense of achievement to see their designs come to life for the world-record attempt.”

Women in Engineering students inspired by Factory 2050 visit
26/06/2018
Women in Engineering students were blown away by the advanced technology they saw in …
Award success for AMRC apprentice
20/09/2019
A self-confessed teenage tearaway who turned her life around with an engineering appr …
AMRC hailed as flagship model for clusters of excellence needed to make Britain fit for the future
26/04/2018
THE University of Sheffield Advanced Manufacturing Research Centre has been champione …
AMRC Executive Dean crowned Sheffield City Region’s ‘Property Personality of the Year’
07/07/2017
AMRC executive Dean, Professor Keith Ridgway was last night (06/07/17) crowned the Sh …