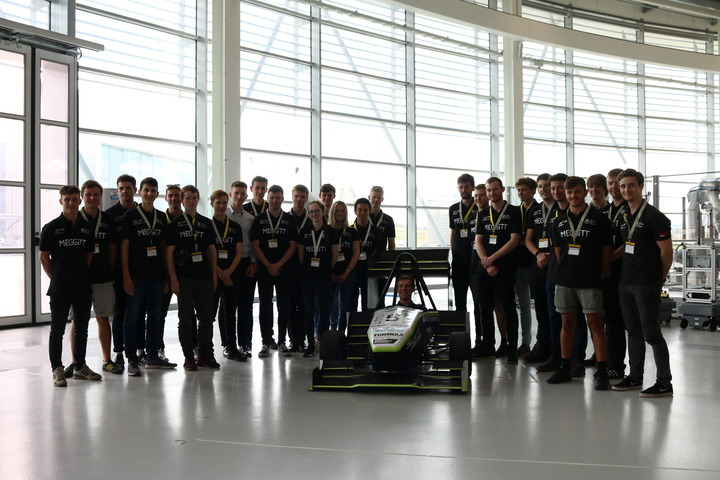 Revved up: The Sheffield Formula Racing team unveiled their latest car at the AMRC Factory 2050.

The AMRC supported a team of University of Sheffield engineering students who brought the chequered flag down on the academic year after building their own single seat racing car and competing at a world famous racing circuit.

Students in the Sheffield Formula Racing team have dedicated the past ten months to building a race car from scratch alongside their studies so they can follow the tracks of their racing heroes and compete at Silverstone – the home of British motorsport.

Comprised mostly of undergraduate mechanical engineering students from every year of study, the team competed in Formula Student, Europe’s most prestigious educational engineering competition, which is run by the Institution of Mechanical Engineers.

During the construction of this year’s car, the University of Sheffield Advanced Manufacturing Research Centre and AMRC Training Centre opened their workshop doors to the team, helping to manufacture parts for the racing car and allowing the students to use their machinery for the cutting of its tooling board, helping them make speedy progress on the project.

The AMRC also provided crucial help when the team experienced issues with suspension components which they were struggling to manufacture in time for testing. The AMRC Training Centre stepped up for an 11th hour rescue, offering access to one of its five-axis milling machines to make the critical parts.

“Within hours, the centre had us up and running with programming and five-axis machining access,” said Sam Williams, Manufacturing Director for Sheffield Formula Racing. “It helped us hugely.”

Sam wrote a letter on behalf of the team to Nikki Jones, Director at the Training Centre, thanking her for the vital help.

He added: “Everyone at the centre has put themselves out of their way to help us out, but I'd like to particularly thank Andy Langley and Gareth Wilkinson. Gareth for allowing us to use the centre and the facilities with short notice, and Andy for giving us his time to sort us out a HyperMill licence, five-axis CNC program, machine with us and teach us as we went along.

“Sol Smith, Rob Newman and I have all learned a lot from the experience and Sol is now one of a few within the team to have seen one of his complex parts go from initial concept, CAD and optimisation, CAM programming and final machining.” The car was unveiled at an event held at the AMRC's Factory 2050 which was attended by the student team members, AMRC engineers and staff from the university and AMRC Training Centre.

After working around the clock throughout the academic year and facing last minute technical setbacks that put their racing dreams in jeopardy, the students managed to compete in every event throughout the Silverstone weekend and finished 14th overall and ninth out of the UK universities competing. It was won by the University of Modena and Reggio Emilia from Italy.

The competition aims to help students test the skills and expertise they are developing on their engineering degree by working together to manufacture all aspects of a race car – from design through to build.

Backed by industry and high profile engineers, such as Ross Brawn OBE – Managing Director of Motorsports and Technical Director of Formula 1 – the competition aims to help develop enterprising and innovative young engineers and encourage more young people to take up a career in engineering.

The Formula Student competition is viewed by the motorsport industry as the standard for engineering graduates to meet, further helping them to make the transition from university to the workplace. Rob Newman, an aerospace engineering student at the University of Sheffield and Team Principal of Sheffield Formula Racing, said: “It feels surreal how we work all year to produce this car and then it all comes down to two days of racing in July.

“Unfortunately we didn’t get the result we wanted at Silverstone as we experienced some last minute setbacks with the performance of the car while we were prepping it for the competition. However, the fact the team worked so hard to overcome these setbacks meant we then managed to compete in every race throughout the weekend.

“A failure in the endurance event meant we couldn't collect maximum points. Nevertheless, we still finished in the top 10 UK teams, which really shows the skills and determination that everyone has in the team.

“I’m incredibly proud of how everyone in the team performed, not just in the competition but throughout the whole year. Our performance at Silverstone put Sheffield Formula Racing on the map and shows that we have built a car which I’m confident can return to the competition next year and win.”

Celebrating its tenth year, the Sheffield Formula Racing team is primarily funded by the University’s Department of Mechanical Engineering. The team also receives generous donations from University of Sheffield alumni and sponsorship from organisations such as global aerospace engineering company Meggitt and the GFG Foundation, a charity working to get young people interested in STEM subjects. The University of Sheffield Advanced Manufacturing Research Centre (AMRC) also provides support through offering staff expertise and access to on-site machining capabilities.

Furthermore, the University’s Department of Mechanical Engineering has continued to support the team by providing support for additive and composites manufacturing. Students in the team also have access to the full range of facilities in the iForge – a student-led makerspace in the University’s state-of-the-art Diamond building, which gives students the space and opportunity to collaborate, create and make outside their academic studies.

Evelyn Davis, a second year mechanical engineering student, said: “My second year on the team has been even better than the first. This year I designed and made the carbon fibre seat, which was created with the help of the University of Sheffield Nuclear AMRC.

“They let us use their GOM structured light scanner to capture the ideal shape and position of our driver to create a model in CAD, which I then manipulated to design a mould for the carbon fibre lay-up. The assistance provided by the University’s Faculty of Engineering was also critical - notably the invaluable use of the faculty’s autoclave for curing carbon fibre, and having access to the iForge, which meant we could cut and trim the cured parts to meet our deadlines.

“In my second semester this year I had a module that included polymers and composites as part of my mechanical engineering degree, and having the opportunity to compare what I was learning about carbon fibre in lectures to the practical work I was doing with it in my spare time has been invaluable.”

Evelyn added: “Being a part of Sheffield Formula Racing is a lot of work – everybody on the team dedicates hours of time every week and months of our holidays to making our car, but it is all worth it when you see the product of that effort driving round the track at Silverstone. The five days at competition spent camping in a muddy field is one of the highlights of my year, and I’m already looking forward to the next one!”

Find out how to join the Sheffield Formula Racing team here

The University of Sheffield has put this video together about the team, check it out.