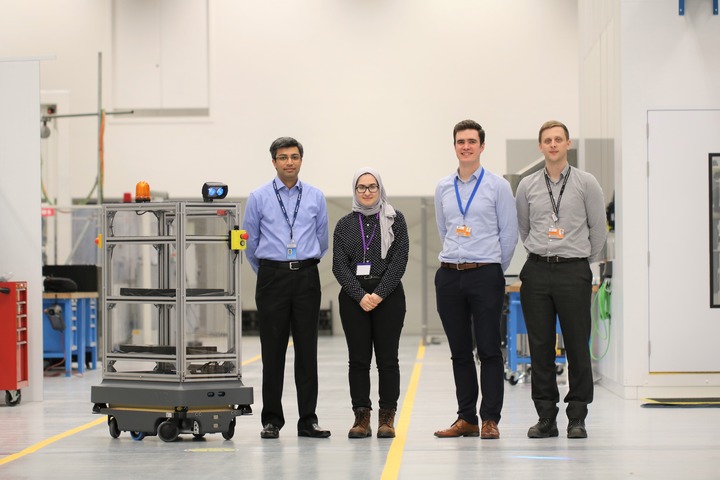 (L-R) Amer Liaqat and Sema Al-Attbi of Airbus UK with Dr Lloyd Tinkler and Dr Scott Dufferwiel of the AMRC and the MiR200 robot shown with its racking, integrated flashing beacon and direction indicator projector.

Entire aircraft wing assemblies could be transported by intelligent, autonomous robots at the vast Airbus production facility in North Wales following a collaborative research project with engineers at the AMRC’s Integrated Manufacturing Group.

The ambitious project began by developing safe, automated means of delivering tooling supplies internally within the Airbus factory at Broughton in Wales, but could be expanded rapidly as the benefits of using small, autonomous robotic vehicles are being realised on the shop floor.

Amer Liaqat, Technology Manager for Assembly Innovation & Development at Airbus UK, said: “This project has been Airbus’ first trial of autonomous mobile robots (AMRs) on the shop floor. We have made a number of enhancements to the standard off-the-shelf technology to make it safe and suitable for our factory environment and are now setting benchmark for its roll-out to other Airbus sites worldwide”.

The project was initiated to fulfil Airbus’ vision of automating component handling which involves significant amount of manual work due to the sheer size of the components and precision required during aircraft assembly. Automating this process will eliminate the non-value added operations and give significant benefits to Airbus in terms of capacity and rate ramp-up.

“Doing small scale trials with this AMR has given us a good idea of the challenges involved in adapting this technology and the needs for future development work,” added Amer. AMRC Senior Project Engineer, Dr Lloyd Tinkler, said: “Supervised trials of the robots have already taken place and estimated that utilising them could save the whole time equivalent of one operator per shift in the current use case at Airbus, freeing time for the operators to work on highly-skilled tasks, ultimately improving shop floor productivity.

“This outcome has led to Airbus exploring opportunities where such robots could be used to optimise processes, including specially adapted versions to pull trolleys with aircraft parts and tooling already in use at the Airbus site.”

Amer said: “We can see the potential to go even further and work with the AMRC to develop autonomous mobile robots for precision assembly tasks such as component positioning and certification. Developing it further, we could see this technology being utilised to transport an entire aircraft wing between factories on site at Broughton”.

The robots have been developed by the AMRC based on the MiR200 robot from Danish company, Mobile Industrial Robots ApS. They have a payload of 200kg and top speed of 4km/h and the engineers have been adapting them to safely transport small items such as drilling tools in a storage rack designed and validated for use using augmented reality technologies at the AMRC’s Factory 2050. In-built laser scanners map the environment for the robots, so they can navigate their surroundings unaided by human intervention; whilst flashing lamps and beacons indicate current status and intended direction to those in the vicinity.

Beyond this initial deployment, the AMRC and Airbus are drawing on simulation models of MiR200 robots developed by the Department of Automatic Control and Systems Engineering at the University of Sheffield to provide an assessment of how these robots will interact with the shop floor environment.

Professor Ash Tiwari, Airbus/RAEng Research Chair in Digitisation for Manufacturing at the University of Sheffield, said: “Our simulation models have led to the identification of problem scenarios that informed physical testing and modifications on MiR200 at AMRC's Factory 2050.”

The University of Sheffield researchers are also working with AMRC to establish a business case for future deployments of AMRs across the Airbus shop floor. To support this, the AMRC has been making further adjustments to the AMRs, including the addition of cameras to monitor the number of tools delivered per shift and industrial laser scanners mounted vertically that will detect over hanging obstacles and enclose the robot in a protective field which will alert operators to any errors; disabling the robots safely if there are any problems.

Lloyd said: “The further developments will enable us to complete a trial of the AMRs unsupervised by humans at the Airbus Broughton site, the aim of which is to validate the estimated time-savings, the number of movements and how many tools the robots are delivering between the engineers per shift. This will ensure they are ready to roll out live onto the workshop floor to assist engineers by delivering supplies from a number of locations.”

Amer said: “This project has also provided the opportunity to work with the AMRC to conduct a feasibility study on product inspection and tooling certification through mobile photogrammetry. The advantage of having a mobile platform instead of a fixed station is the flexibility that would allow us to improve factory flow, eliminating bottlenecks as the system could measure on location.”

Ash said the project is an excellent example of a three way collaboration involving Airbus UK, AMRC's Factory 2050, and researchers at the University of Sheffield: “The project team is now collaborating to develop and publish a highway code as an industrial standard for communication and interaction between autonomous systems and surrounding machines, objects and humans. This could be used by a range of companies exploring the potential benefits and regulatory compliance of autonomous mobile robots on their shop floors”.

Europe’s biggest aerospace castings facility now operational
22/03/2017
A castings facility capable of producing some of the biggest titanium aerospace compo …
Immersed in Europe, on track in Manchester
11/04/2019
A stellar gathering of Europe’s leading players in the creative, gaming and art …
Profound transformation
12/10/2018
The regeneration of a region that once symbolised all that was wrong with industrial …
Alpha-I lead the pack at Rolls-Royce hack
19/10/2018
A software company specialising in AI-powered maintenance solutions for aerospace is …