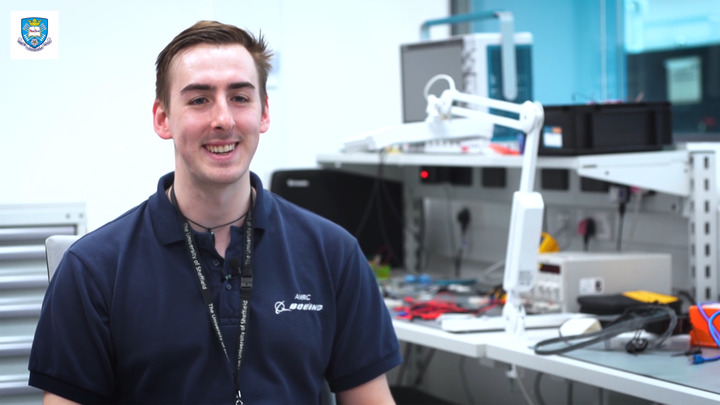 Year in Industry student Liam Overett who has been working with engineers from the AMRC Design and Prototyping Group.

A bioengineering student undertaking a ‘year in industry’ placement with the University of Sheffield AMRC Design and Prototyping Group has been instrumental in developing technologies for a major medical project.

Liam Overett, a fourth year bioengineering student with the University of Sheffield, is working as a project engineer as part of the AMRC’s Design and Prototyping Group.

The group comprises of about 40 staff with a diverse range of skills from mechanical to software and electronics, with engineers working across a range of sectors from manufacturing to healthcare.

Medical AMRC is part of the DPG – which was a major draw for bioengineer Liam in applying to do a year in industry with the group as he wanted to be involved in medical work.

One of the projects he’s been involved in is creating an Internet of Things (IoT) enabled smart laparoscopic tool for use in a digital operating theatre - the first step towards enabling capture of surgical procedures in real time.

Liam said: “To someone thinking of doing a year in industry I would say do it – because you get a wealth of experience, explore different parts of the field that you are in, you get paid – which is always good – and you get to decide whether this is something you actually want to do or if you want to adapt your career path before you finish your degree.”

David King, Digital Design Manager at the AMRC, says students gain valuable knowledge from a placement adding: “Liam has been heavily involved in a very exciting project that we’re working on called the Digital Operating Theatre and he’s been instrumental in developing some of the technology that’s going within that theatre, and pretty much single-handedly delivered some of the work packages within that project.

“Liam came with a biomechanical background which has been very useful and he’s contributed at the highest levels within the team and has been very successful.”

Find out more about Liam’s year in industry in the video below:

AMRC bring the Fourth Industrial Revolution to the small businesses of the UK at MACH 2018
12/04/2018
The University of Sheffield Advanced Manufacturing Research Centre (AMRC) is on a mis …
Afghanistan veteran hails ‘game changing’ mobility device
17/01/2020
A disabled former Royal Marine Commando has hailed the sleek, space-age mobility devi …
Composite hydrogen tank aims to decarbonise road transportation
13/05/2022
A composite hydrogen storage tank has been developed for use in the heavy duty transp …
MTA and Factory 2050 at the AMRC partner for exciting Industry 4.0 feature for MACH 2018
23/11/2017
Low cost automation can revolutionise SME’s businessesThe Manufacturing Techn …