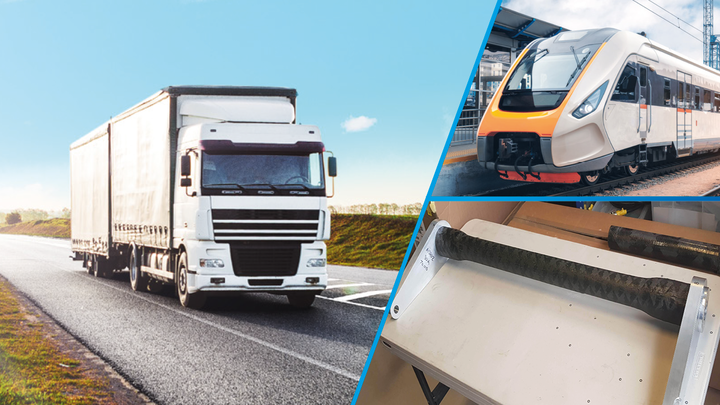 Two South Yorkshire SMEs have joined forces with the University of Sheffield Advanced Manufacturing Research Centre (AMRC) to push the automotive sector further along the road to net zero by designing, manufacturing and testing a high-performance stabiliser bar for trucks and trains that is 30 per cent lighter than those currently on the market.

Article featured in issue 14 of the AMRC Journal – out now

The AMRC Composite Centre worked with Sheffield-based Tinsley Bridge and Performance Engineered Solutions, in Rotherham, on the Lightweight Metal Composite Hybrid (LiMeCH) project which, with £400,000 in funding from Innovate UK, created a lighter alternative to the tubular steel bar currently used for suspension units.

“Lightweighting is top of the agenda for our customers,” said Russell Crow, director of engineering at Tinsley Bridge. “That is even more so when they are looking at alternative propulsion systems, such as electric drive trains and alternative fuels, because every gram they can save offsets the additional mass they have to carry for the batteries or hydrogen fuel tank.”

Carbon fibre composites are not yet widely used in the volume automotive sector for functional parts such as suspension systems where the industry standard is a steel tube welded to metallic end fittings. Replacing the steel with lighter materials can improve fuel efficiency, helping operators meet new emissions regulations, and composite materials are less affected by fatigue so their use can deliver increased reliability without compromising performance.

In the two-year LiMeCH project, the consortium aimed to create a suitable joint between a composite tube and a metallic end fitting that together form an anti-roll bar (ARB), a key part of a vehicle’s suspension unit. Russell says as a minimum, the joint needed to be capable of transmitting the same loads as the equivalent part manufactured from steel spring.

He said: “The key was finding a modular system. This project was not about making a very expensive composite part, but about how we could bond together metallics and composites to create high configurability from a low number of stock parts.”

Craig Atkins, research engineer at the AMRC Composite Centre, says while that project made advances in the areas of volume composite manufacture, metallic arm production and bonding, it created other issues which the team had to develop solutions.

He said “We took outcomes from LiCoSuCo that didn’t succeed, in particular with the integrity of the bonded joint between the metallic and carbon fibre. The continued LiMeCH project builds upon the results of the previous project and continues the collaboration and research.”

Performance Engineered Solutions used its expertise in composites and lightweight materials to design the ARBs, employing Finite Element Analysis (FEA) to simulate the process prior to manufacture to determine whether the proposed designs could resist the loads an ARB is subjected to.

Stefan Dalberg, senior design engineer at Performance Engineered Solutions, said: “We needed to consider the ease of manufacture as well as the material selection, adhesive selection and how it would perform during non-destructive testing (NDT).”

The AMRC’s Composite Centre produced four anti-roll bar prototypes using its MF Tech filament winding system in which filaments of carbon, impregnated with resin, are wound onto a rotating mandrel to form a desired shape. PES penetratively inspected the inside of the bar using CT scanning technology, then used an in-house light scanning system to visually inspect the parts.

Russell says the prototypes were subjected to rigorous testing.

He said: “Inspection of the composite system was key because these parts have different failure modes to the traditional steel that everyone in the industry knows, understands and is very comfortable with. We researched and developed a whole range of nondestructive testing techniques, both in situ and on a test track, to understand if the part had been damaged, to what extent it had been compromised and whether it was suitable for continual use or not.”

Stefan says that non-destructive testing means the consortium can now confidently state that they can bond metallics to composites in a manner that passes the fatigue requirements of industry.

“We have done the NDT, environmental testing and impact testing; so we have effectively looked at everything demanded of this bar under a vehicle and created the safety case,” said Stefan.

“Now it is a matter of optimising the design, because we can potentially make it even lighter, and continue to engineer out unit cost.”

Craig says the results of this project have applications beyond heavy industry. “The ARBs we prototyped are designed for trucks, trains and military vehicles, but it can be scaled-down - there is no reason why this technology can’t be applied to electric vehicles (EVs) and smaller vans used by courier services,” said Craig.

“As the automotive industry moves towards greater electrification and lighter weight parts, there is ever greater focus on moving away from wholly metallic components. Finding a way to bond metallics to composites and reduce a component’s weight by almost a third is a significant step along the road to net zero.”

Article featured in issue 14 of the AMRC Journal – out now

Composite hydrogen tank aims to decarbonise road transportation
13/05/2022
A composite hydrogen storage tank has been developed for use in the heavy duty transp …
AMRC supports ‘informed and intelligent’ growth at power transmission business
24/08/2021
A power transmissions supplier tapped into simulation and modelling expertise at the …
Weaving a way to fusion energy
24/01/2020
A 3D woven composite component, capable of withstanding extreme temperatures inside a …
Rapid response prototyping keeps COVID clinicians safe
19/10/2020
Additive manufacturing experts at the University of Sheffield Advanced Manufacturing …