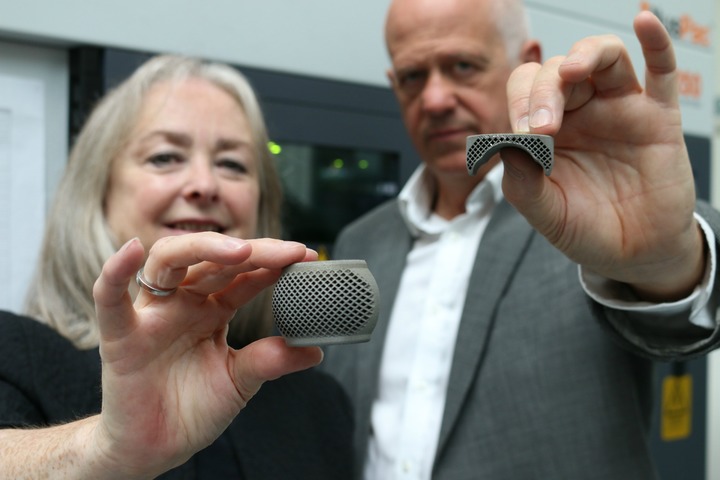 Good vibrations: Christina Milnes holding one of the load-bearing spheres and Craig Milnes with one of the fluted cups additively manufactured in titanium for Wilson Benesch by the AMRC’s Design and Prototyping Group. 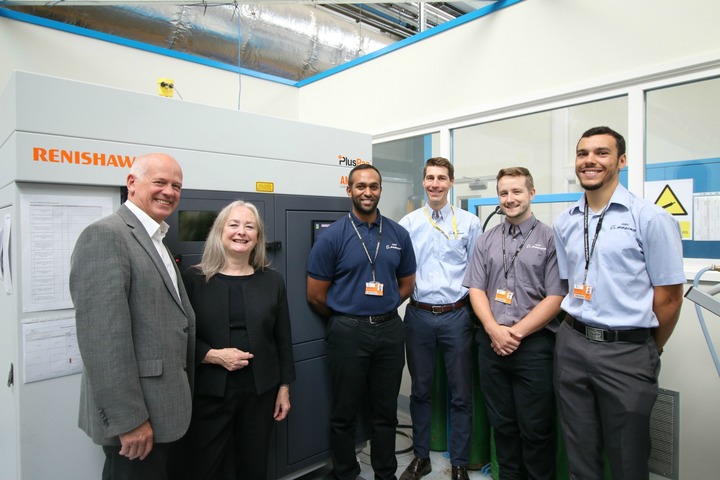 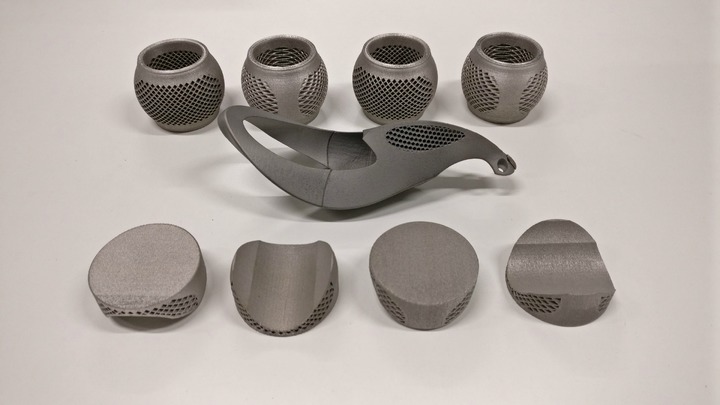 Advanced solution: The components additively manufactured by the AMRC for Wilson Benesch. Top are the load-bearing spheres, centre is the curved tonearm mount and bottom are the fluted cups.
Previous slideNext slide

Engineers from the AMRC have turned up the volume on additive manufacturing to collaborate with a high-tech audio company to develop parts for some of its luxury products.

A team from the Design and Prototyping Group at the University of Sheffield Advanced Manufacturing Research Centre (AMRC) were approached by local firm Wilson Benesch to use its additive manufacturing (AM) capabilities to realise a selection of new titanium components.

The choice of components consisted of a tonearm mount for a state-of-the-art record player, fluted cups to go between the shelves and carbon fibre bars on a Hi-Fi rack, and load-bearing steel spheres that sit on the four corners of each section of the rack to isolate the shelves.

Wilson Benesch, a Sheffield-based business owned and directed by Craig Milnes and Christina Milnes, specialises in the manufacture and design of high-end audio loudspeakers, turntables and Hi-Fi furniture built from advanced materials technology, such as carbon fibre composites.

Wilson Benesch, who have worked with the AMRC on a number of developments, recognised the considerable potential for creating highly optimised structures that benefit from both advanced materials technology and manufacturing processes. Wilson Benesch tasked the Design and Prototyping Group (DPG) with helping to develop improved functionality of the three product parts with the objective of optimising the control of resonant energy in these structures. The net result has been the development of highly functional, but also aesthetically striking components to give Wilson Benesch the edge over its competitors.

Project engineers Abdul Haque, Luke Hill and Daniel Tomlinson worked on the project alongside project manager Marcus Crossley and Head of Strategy for Near Net Shape Processing at AMRC, James Hunt. The team were given a clay model of how the company envisioned the tonearm mount could look and were then able to reverse engineer this by using a CT scanner to create a scan image that was uploaded onto a computer and interpreted to create a new CAD part geometry.

Luke said: “When we created a form Craig was happy with and that we were confident could be manufactured using additive manufacturing processes, we could continue with the detailed design work ensuring the tonearm would fit the Wilson Benesch system requirements. We used the capabilities of selective laser melting AM with Ti-6Al-4V powder to create an internal through channel to feed a wire through the back of the tonearm.

“This is something unique, and as far as performance goes is an ideal solution because Wilson Benesch wanted to create a vacuum within the tonearm. They also specified a tight tolerance between the component and the mounting point, but they needed to feed a wire through somewhere, so this was a perfect approach. The internal wiring keeps the tonearm aesthetic uninterrupted and organic and the wire is not trailing about so it will not get tangled or spoil the appearance."

AM is a sound choice where there is a high degree of complexity in a part or to add functionality into an assembly – like the tonearm mount. The advanced technology also meant the mount’s part count was reduced from fifteen down to just two.

The 500g steel spheres were also redeveloped, stripping away material and weight but at the same time improving performance.

Luke said: “When we evaluated the current steel ball design, we realised that it was a smart solution but it wasn’t actually particularly weight efficient as far as load transfer goes. After running topology optimisations and structural simulations, it was clear that what we really needed was a cylinder to transmit the energy in the ceiling to floor direction.

“That meant we could strip a lot of weight out and therefore increase the specific performance by using the high-stiffness titanium alloy material more efficiently. Then we added through-channels which have an energy dissipation perspective to them that stripped out further weight.”

In terms of efficiency, when compared with conventional machining methods, Luke said AM was a less wasteful option for the complex parts created within the project as it used a very high percentage of the material to create the final part and was more flexible.

He added: “Additive manufacturing brings the flexibility desired by manufacturers because of the ability to quickly and iteratively make design improvements without requiring tooling changes or involving different processes, but simply changing the CAD model and sending it to print on the machine.”

James said: “In having the facilities here available for companies and SMEs to come and try, it allows them to de-risk the activities so they don’t have to go and buy a piece of equipment at £500k or they don’t have to even go as far as paying someone to make parts for them.

“As can be seen through this process, it’s not just a case of sending a drawing and someone printing it off, there is a development cycle that in turn feeds an understanding of how the process works so that the new parts fit the process better. So having that as an available service is of great benefit to companies.”

Craig Milnes, design director of Wilson Benesch, said: “James and Marcus, along with the DPG engineers, Abdul, Luke and Daniel have been invaluable in this project, allowing Wilson Benesch to push through design concepts into finished prototype components that extol all of the virtues of the Wilson Benesch brand. That is to say, conceptually unique, technologically and materially advanced, aiding the ultimate goal of advancing the state-of-the-art in audio design and high fidelity music reproduction.”

Christina Milnes, managing director of Wilson Benesch, added: “Wilson Benesch have collaborated consistently with centres of excellence in engineering, design and manufacturing since the foundation of the company. Indeed this is one of a number of projects that we have worked on with the Advanced Manufacturing Research Centre since the centre was established in 2001. Having access to this kind of technology is a major asset to the Sheffield City Business Region and manufacturing centres that serve it.”