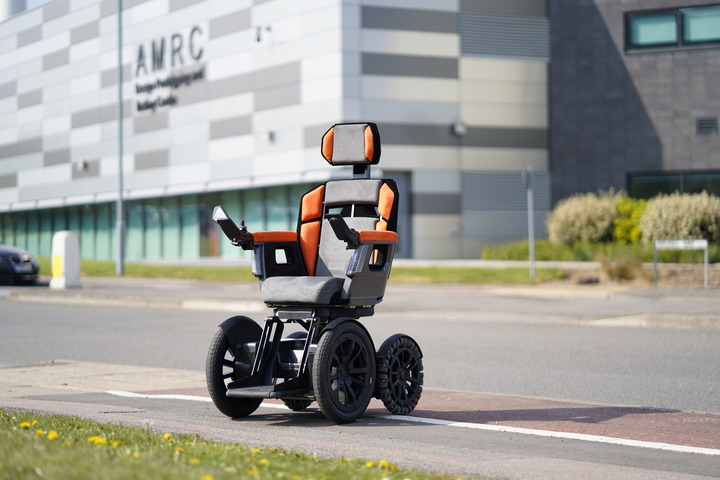 A disabled former Royal Marine Commando has hailed the sleek, space-age mobility devices, designed and prototyped at the University of Sheffield Advanced Manufacturing Research Centre (AMRC), as a ‘game changer for users the world over’.

A fully-functioning prototype has been manufactured by AMRC engineers which incorporates an electrically actuated arm to raise users to a ‘social height’, multi-directional all-terrain wheels, the ability to turn on the spot and a ‘cool’ design inspired by Star Wars.

Called Victor, it is the brainchild of Cpl Phil Eaglesham who contracted Q Fever during active service in Afghanistan in October 2010. The disease quickly progressed to mean the father-of-three, a competitor for Team Ireland at the Rio 2016 Paralympics, is now completely reliant on a wheelchair.

Forced into a new way of life, Phil quickly identified multiple key failings affecting mobility devices: “Current devices on the market are outdated and not fit for my generation. Development has been lacking and existing designs stigmatise the user. People judge with their eyes and something that looks limiting affects how other people interact with the person using it.”

In 2015, Phil set up Conquering Horizons with his wife Julie and businessman Brian Meaden to create a mobility device that had none of the drawbacks Phil identified. Following a meeting with the University of Sheffield Engineering Department, Phil and Brian were introduced to engineers at the Medical AMRC, part of the High Value Manufacturing (HVM) Catapult, who were able to bring their vision to life.

“From our very first meeting with the AMRC there was immediate interest in helping us. From the outset, the project really took off and developed momentum,” said Brian.

From our very first meeting with the AMRC there was immediate interest in helping us. From the outset, the project really took off and developed momentum.

The Royal Marines Charity granted Phil £60,000 to get the proposed device through the initial concept design phase. Following a launch event at the Imperial War Museum in London in 2016, over £700,000 was then raised from more than 500 investors to take the project to the next phase: creating a working mechanical prototype.

Senior Project Engineer at the Medical AMRC, Samuel Rees, who lead the project, said: “The first phase ended with a concept and a lash-up model so the next stage meant investigating whether this arrangement for a wheelchair could actually perform properly.

“For the seat, we invented the lifting mechanism, which has the whole lifting arm going through an actuator, onto a rocker arm and then onto a shock. It provides a really plush ride, so you could drive it at full speed off a curb and the landing is really soft.

The seat was 3D-printed in sections in Acrylonitrile Butadiene Styrene (ABS) using the AMRC’s Fortus 900, joined together with an aluminium frame, spray painted in a car body shop and specially upholstered.

“We also invented a novel design of omni wheels arranged with differential steering to spin on the spot, where one side turns one direction and the other side turns the other way. The idea with the wheelchair is that it can be used indoors or outdoors and move quickly and silently over various terrain using four-wheel drive.” Samuel said one of the biggest challenges for his team was creating a mobility device which was aesthetically relevant, attractive and ‘cool’ but which fell within strict government restrictions.

“The weight limit for a class 3 mobility device is 150kg and at one stage of the project an early prototype was weighing 180kg. Going through topology optimisation and using solidThinking Inspire we created a design which meant the aluminium could be machined with pockets cut out of the main structural members, saving us material and weight.

“We wanted a design that looked good from any angle; every single part had to be open to scrutiny, but maintain the objective of the brief which was to ensure that an able-bodied person would want to be seen using it.

“It needed to have broad functionality, but we didn’t want it to look like existing wheelchairs which have adjustable footplates, locking knobs and sliding clamps. All those things really damage the appearance.

“The approach to everything in the design was creating something which was sleek, well-resolved and clean. It borrowed quite a lot from automotive design and a little bit of Star Wars – I’ve been accused of being heavily influenced by Stormtroopers.”

Phil said the two completed prototypes the AMRC presented him with surpassed what he thought was possible: “The devices the AMRC produced are outstanding and prove that what we’ve been aiming for is achievable. Victor is a design which doesn’t ask the environment to adapt to the user, it is a mobility device which adapts to the environment around it.

“To design a device which able-bodied people see as cool and would use themselves shifts the dynamic, it means disabled users don’t feel like second-class citizens. In the short period I have been using Victor it has completely changed my life; it has given me an enormous amount of independence and I see this as a game changer for users the world over.”

We wanted a design that looked good from any angle; every single part had to be open to scrutiny, but maintain the objective of the brief which was to ensure that an able-bodied person would want to be seen using it.

In 2018 the prototype was awarded the Alex Moulton Award for product innovation at the Institution of Engineering Designers (IED) Awards, with judges noting the ‘application of insight’ shown by the AMRC and the Conquering Horizons team.

Brian said Victor could be ready to launch to the public late next year: “Powered wheelchairs currently on the market are expensive, unreliable and unable to negotiate obstacles only a few millimetres high. Our vehicle is cool in design, robust, has off-road capability, four-wheel drive and can lift users to a social height; it is a game changer for all ages, sizes, weights and disabilities.

“We anticipate we will be launching at around the time of the Tokyo 2020 Paralympics.”

Samuel said this project highlights the AMRC’s industrial design capabilities: “The Design and Prototyping Group at the AMRC have a unique team that possess a broad array of skills, drawing upon years of experience in different industry sectors to develop ingenious solutions to problems, then prototype and test them using state-of-the art rapid manufacturing technologies not found together in any other facility.

“We regularly develop new intellectual property in our projects which is carefully integrated to improve user experience, cost, appearance and manufacturability - attributes which have provided our customers with game-changing products.”

AMRC hailed as flagship model for clusters of excellence needed to make Britain fit for the future
26/04/2018
THE University of Sheffield Advanced Manufacturing Research Centre has been champione …
NASA’s curiosity leads them to rove the planet in search of out-of-this-world AMRC technology
04/12/2018
THREAD, the game-changing 3D printing process developed at the University of Sheffiel …
Access to world-class facilities at AMRC Factory 2050 made easier for SMEs with opening of new ‘reconfigurable factory’ research cell
30/08/2017
Ease of access to the world-class research and development facilities on offer at the …
Bumper crop for typhoon relief
09/12/2013
AMRC engineers and staff contributed almost £1500 to help typhoon victims in th …