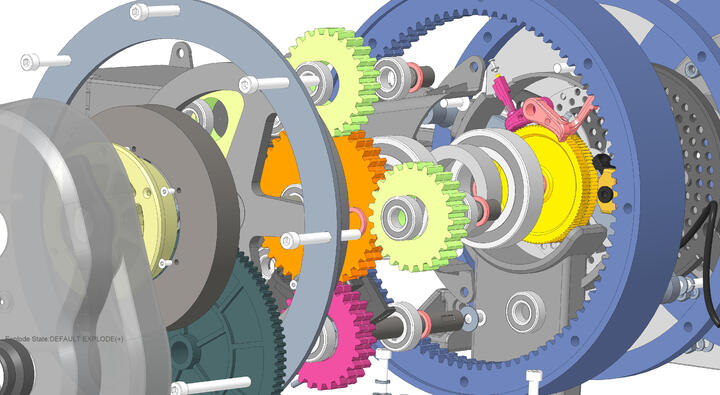 The CAD model and prototype of a mechanism which the AMRC helped develop that enables an alternative body motion during exercising.

Design and prototyping expertise from the University of Sheffield Advanced Manufacturing Research Centre (AMRC) helped a former GP to prove out an ambitious idea for a new way of exercising that maintains leg and hip mobility, turning it into a feasible design concept.

For many years, Bill Morrison worked as a GP and in that time became aware of a mobility threshold that he, and many of his patients, encountered when reaching a certain age. This spurred Bill to explore new ways of exercising and led to him developing an idea for a device that could help prevent immobility.

“The impact on the body of sitting down for long periods of time throughout our lives is huge; it’s not something we’re biomechanically meant to do,” said Bill. “When we lose our mobility, it impacts on everything in our lives and I had an idea for how to reverse this problem, a way of exercising which would prevent people becoming immobile.

“My work with the AMRC was about exploring whether it was possible to turn this idea into a reality. They’ve shown me what is physically possible to achieve and brought the idea to the point that I now know the engineering works. I am a one-man business and could not have achieved progress like this without the support from the AMRC.”

I would recommend working with the AMRC to any small business with big ambitions to explore what might be possible. - Former GP and entrepreneur Bill Morrison.

The AMRC is part of the High Value Manufacturing (HVM) Catapult and the project was paid for using funds from the HVM Catapult as part of a commitment to working with small and medium-sized enterprises. Marcus Crossley, Senior Project Manager in the AMRC’s Design and Prototyping Group, said: “Bill is an entrepreneur with ambitions to develop a new way of exercising the legs and hips, for everything from rehabilitation to supporting elite level performance.

“He worked first with our colleagues at AMRC North West, looking at a proof of concept for an innovative mechanism that enables an alternative body motion during exercising than what is currently available using equipment in gyms or hospitals. This work proved the concept was feasible, and Bill then came to work with us here at the AMRC in Sheffield to take the design forward.

“We worked with him to produce a CAD model and prototype of the mechanism which enabled us to prove out the principles and understand how it behaved. An important part of the work we did here was to simplify the original complex ideas behind the mechanism.

“This was a design which for a long time only existed in one person’s head. We were able to make it real and along the way suggest alternative ideas for how the same outcomes could be achieved using a more straightforward method. We also explored the potential for integrating digital technology into the device.

Ultimately, this project has been about taking an ambitious and creative idea in one person’s head and working through the different stages needed to turn this into a practical, working version. - Marcus Crossley, AMRC Senior Project Manager.

“The next stage was to produce a functioning 3D printed and laser cut plastic version of the mechanism so we could prove, as quickly and cheaply as possible, that it worked as intended. We were also able to recommend modifications which mean the device will be easier to manufacture and assemble. The next stage will be to design and prototype the device in its entirety and conduct trials with people using it to test its performance.

“We have worked with Bill through several stages of this process. Ultimately, this project has been about taking an ambitious and creative idea in one person’s head and working through the different stages needed to turn this into a practical, working version. At the AMRC we are able, relatively quickly and cost effectively, to work with a small business like this to explore such an idea and make it a reality.”

Bill added: “The next step for me is to try out the mechanism with people and see if it performs in the way I expect it to. I would recommend working with the AMRC to any small business with big ambitions to explore what might be possible.”