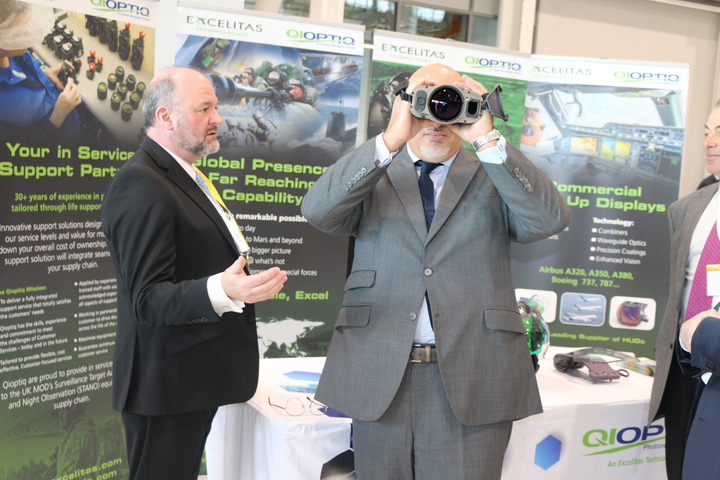 The Minister for Business and Industry says technologies being developed by the University of Sheffield Advanced Manufacturing Research Centre (AMRC) are crucial to reducing the environmental impact of air travel and enabling the government to reach its target of net-zero carbon emissions by 2050.

Nadhim Zahawi MP made the comments during a speech at AMRC Cymru in Broughton where he also called the UK the ‘home of innovation and enterprise in aerospace’.

Mr Zahawi visited the AMRC’s newest facility, the first High Value Manufacturing (HVM) Catapult centre in Wales, as part of an event to launch the ‘Aerospace Sector Deal – One Year On’ report by the Aerospace Growth Partnership (AGP).

The report called the UK’s aerospace sector a ‘world leader in the manufacture of engines, wings and advanced systems’. It directly employs 115,000 people across all parts of the UK and the Department for Business, Energy and Industrial Strategy estimate the industry is worth £36 billion a year to the economy. But to remain globally competitive in 2020, the report said the sector needs to focus on the ‘delivery of technologies that help reduce the environmental impact of air travel’, citing Airbus’ Wing of Tomorrow programme, being delivered with the help of engineers at AMRC Cymru.

“Last year we became the first major economy to put a net-zero emissions target into law, ending our contribution to climate change,” said Mr Zahawi. “With the number of flights soaring, it is clear that the aerospace industry will be critical as we make this massive transition and the demand for green aviation technologies will be immense.”

Backed by £20m from Welsh Government, AMRC Cymru has been built on the Deeside Enterprise Zone close to where Airbus is developing the Wing of Tomorrow programme, which is part of a global Airbus investment in research and innovation.

The state-of-the-art facility opened in November 2019 with Airbus’ Senior Vice President, Paul McKinlay, calling AMRC Cymru a ‘game changer for Airbus to change its environmental footprint for the future’. In his speech, Mr Zahawi also highlighted the importance of the aerospace sector to the national economy: “The value of this industry is there in black and white for everyone to see in the report and I’ve been pleased to see that the sector is focussed firmly away from the South East with more than 90 per cent of businesses located elsewhere across the country.

“The UK is the home of innovation and enterprise in aerospace with a significantly large number of companies creating thousands of jobs for local communities.”

AMRC Cymru’s Research Director, Andy Silcox, said: “We were delighted to host the Minister for Business and Industry and representatives from all of the major UK aerospace manufacturers, including Airbus, Bombardier and Rolls-Royce, for the AGP event to mark the first year of the Aerospace Sector Deal.

“The event gave the AMRC team the opportunity to explain how we are working with the Welsh Government to help all Welsh manufacturers, regardless of which sector they serve, to adopt innovative manufacturing technology and help them reach new levels of productivity and sustainability.

“Aerospace will undoubtedly play a huge part in AMRC Cymru’s development and we are extremely excited to be working on the automation and digitalisation of the Airbus Wing of Tomorrow.” Colin Smith, co-chair of the AGP, added: "The Aerospace Sector Deal was another landmark event in the partnership between government and industry, ensuring we continue to attract the right investment for the UK to remain a world leader in this sector and to develop the skills and technology we need to thrive.

“In the last year, we have seen the Sector Deal’s key programmes get underway which include the launch of the Industrial Strategy Challenge Fund’s Future Flight challenge which is investing in technology to position the UK at the forefront of valuable emerging markets, launch of the SC21 C&G programme and NATEP 3 in support of supply chain companies, commitment to develop apprenticeship standards, and the launch of the Women in Aviation & Aerospace Charter which is working to increase levels of diversity and gender balance within the sector.

“The aerospace sector is now focused upon supporting the UK government’s commitment to achieve net-zero carbon emissions by 2050. By working ever more closely with the government, industry, through the AGP, will continue to invest in the development of third generation technologies required to address this challenge. This will require further industry and government commitment to the already successful Aerospace Technology Institute.”

Primary Engineer campaign to inspire a new generation of engineers in the region kick-started at AMRC
19/11/2018
Pompoms, sequins and sticky back plastic aren’t your typical engineering tools …
AMRC helps develop novel laser tracker
01/10/2018
Engineers at the AMRC have helped develop a novel laser tracking measurement device t …
Prime Minister highlights AMRC's role in aiding manufacturing
08/02/2015
Prime Minister David Cameron has highlighted the work of the University of Sheffield …
Apprentice of the Year returns from USA trip of a lifetime
14/09/2017
A female engineer from Chesterfield, named ‘Apprentice of the Year’ at th …