AMRC is an ‘enormous success’ but more to be done 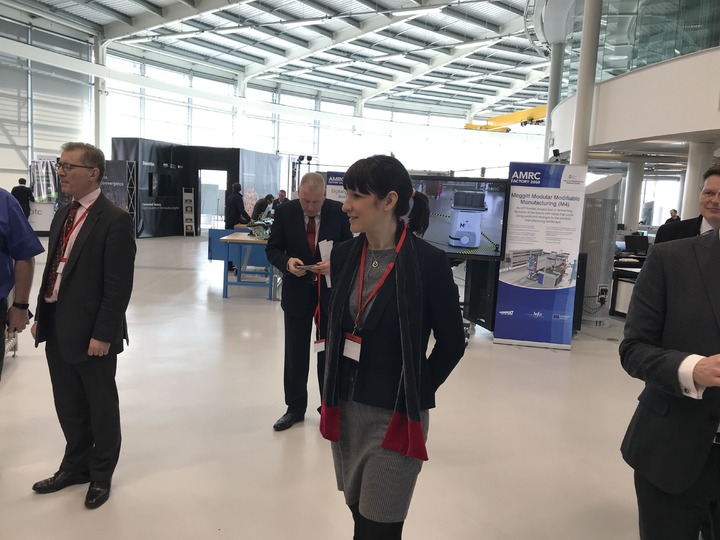 The BEIS committee led by MP Rachel Reeves during a visit to Factory 2050.

A powerful Parliamentary committee investigating the effectiveness of the Government’s Industrial Strategy identifies the University of Sheffield’s Advanced Manufacturing Research Centre as an ‘enormous success’ bringing high-value jobs and significant inward investment to a region blighted by two decades of deindustrialisation.

She said: “Sector deals won’t be enough on their own to tackle the UK’s productivity puzzle or insulate industry from the fall-out of a no-deal Brexit or of greater friction in our future trade with the European Union. But sector deals are a key plank of the Government’s Industrial Strategy and, if agreed fairly and honoured fully, have the potential to make an important contribution to boosting the nation’s lagging productivity, improving competitiveness, and delivering growth to all parts of the UK.”

While praising government for its construction deal, designed to drive innovation in a sector which ‘struggles with low productivity and a potentially unsustainable business model,’ the committee notes that ‘funding promised from Government has been slow to appear, an issue beginning to affect other sector deals’. As part of their inquiry, Rachel and her colleagues visited the AMRC’s Factory 2050 where we are carrying out research with the main disruptors in the construction industry, companies such as Legal and General and Laing O’Rourke, to bring technologies and production processes used in aerospace and automotive to an industry in desperate need of new ideas. The AMRC’s Integrated Manufacturing Group is leading the way in the development of the offsite modular construction approaches highlighted by Mark Farmer in his Construction Leadership Council report to government – Modernise or Die. The committee noted that, as a member of the High Value Manufacturing Catapult, the AMRC is supported by government through Innovate UK on a ‘thirds’ funding model, with a third each expected to come from public funding, private funding and mixed investment. The report shows how the AMRC has built ‘on the existing skills and industries in the area’ to transform ‘a largely low productivity region’ making it an ‘attractive location for new business investment’.

The new Boeing Sheffield facility, whose young workforce is drawn from an apprentice talent pool created by the AMRC Training Centre, is the first in Europe and a flagship for the Industry 4.0 technologies identified in the Industrial Strategy’s Made Smarter programme, headed by Juergen Maier. The committee praised the new facility for enabling ‘good practice from businesses such as Boeing to be shared with academics and start-up businesses, a success story highlighted in the Aerospace Sector Deal’ where it is seen as being an example of how to capture an increasing slice of the £4.65 trillion global market in commercial aircraft with huge growth potential for UK aerospace suppliers.

The University of Sheffield’s Professor Richard Jones, who gave evidence to the inquiry, identified the AMRC as an ‘enormous success’, but warned that the current scale of the Catapults, as a means to increase R&D intensity in the UK, was too small. A former Pro Vice Chancellor for Research and Innovation at the university, Professor Jones is also a founding member of the independent Industrial Strategy Commission and a respected authority on the UK’s productivity challenge.

Like others who gave evidence to the committee he highlighted the geographical disparities in sector deals with ‘left behind regions’ and those impacted by deindustrialisation failing to secure sufficient funding to raise their game. As a result, the committee recommends: “The Government require an analysis of the regional benefits of sector deals as part of the negotiations process. The assessments should be published alongside the deals themselves and regional impact should be measured as part of the review process for each sector deal.”

The report found that more should be done to ensure the Industrial Strategy is used as a lever to support diversity in industries, support innovation through Catapults, and deliver across the UK. It says: “We recommend that the Government do more to ensure that any benefits of the Industrial Strategy and sector deals are shared across the UK rather than focusing almost entirely on London and the South East. BEIS itself needs to lead by example, and we recommend they end their London-centric approach on policy to recruitment.”

The committee says the Industrial Strategy must also honour its ‘open door’ offer to industry and do more to engage with sectors such as retail, hospitality and steel which risk being left behind. Its report finds the ‘Government has focussed its efforts on hi-tech sectors such as offshore wind but has not done enough to engage industries such as retail and hospitality in efforts to secure a deal and help boost productivity in these sectors’.

On steel, the report finds the Government misrepresented the sector’s proposals for a deal, suggesting Government is actually unwilling to meet the requests of the steel industry. The BEIS Committee calls for the Government to make a new effort to secure a deal and keep to its commitment to develop the UK steel industry and help it thrive in a competitive global market.

The report also welcomes the ‘overdue’ establishment of the Industrial Strategy Council –– which is led by Andy Haldane, a University of Sheffield alumnus and the Bank of England’s chief economist – and recommends it sets the metrics and criteria of success for sector deals and publishes regular scrutiny of the process and deals agreed by Government.