Apprentice of the year Bethany gears up for bright future 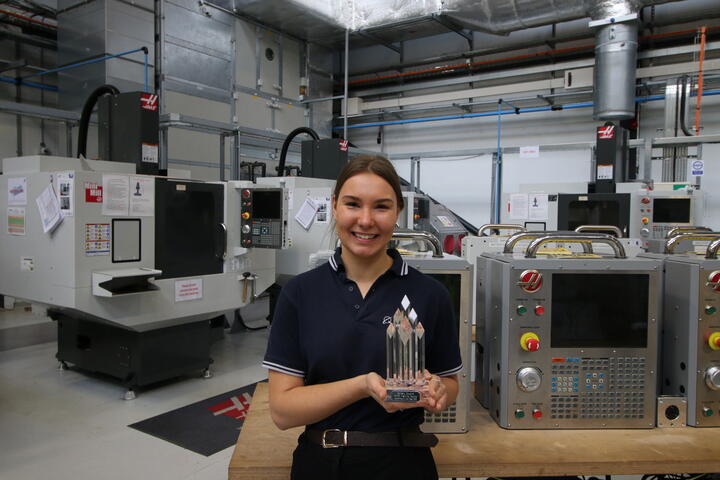 A ‘proven high-flier’ displaying ‘ambition and academic excellence’ is how Bethany Cousins was described by Stanley Black & Decker boss Sir George Buckley when he announced her as overall winner of the AMRC Training Centre Apprentice of the Year Awards.

Bethany, a Manufacturing Technology degree apprentice who works as a project engineer at the University of Sheffield Advanced Manufacturing Research Centre (AMRC), was crowned the 2020 champion by Sir George at an online celebration held on Thursday, December 17. She was also named ‘degree apprentice of the year’, making it a double win for the talented 25-year-old.

Bethany, whose work for the AMRC Gear Centre team focuses on developing novel gear cutting techniques for gear manufacturing, was ‘shocked and beyond grateful’ to have been recognised for both awards.

“It honestly means the absolute world to me and is the perfect positive ending to this year in particular,” she said. “This has definitely been the highlight and best way I could have ever wanted to end my apprenticeship journey.

“I can't thank all of the staff and trainers at the AMRC Training Centre enough. I can honestly say I wouldn't be the engineer I am today without each of them and the AMRC has been a support network beyond anything I could have asked for in an employer.”

There’s no doubt in the judges’ minds that Bethany is a genuine and proven high-flier.

Sir George, whose company Stanley Black & Decker was headline sponsor for this year’s awards, left school with no qualifications and began his extraordinary career as an apprentice electrician at Stanley, going on to become the first non-American to be made head of 3M and the only British CEO of a Fortune 500 company.

He was part of the panel that chose the winners and described Bethany as a ‘committed and impressive apprentice’, praising her abilities as an engineer and skills ambassador for the region.

“Bethany displayed great ambition and academic excellence, and is regarded as absolutely outstanding by the AMRC Training Centre having impressed with her academic achievements,” said Sir George. “She scored the top mark at the end of her degree apprenticeship second year and has gone on to achieve a clear first class honours degree.

“There’s no doubt in the judges’ minds that Bethany is a genuine and proven high-flier. She has shown determination second-to-none which has helped her excel in her studies and play a pivotal role in her position within the AMRC.

“We were very impressed with Bethany’s ambassadorial qualities - she genuinely champions the principles of apprenticeships and is an inspirational role model to all young engineers.”

A celebration event had been scheduled to take place earlier this year at Firth Court in Sheffield but the Covid-19 pandemic meant the ceremony had to move to the virtual world with the University of Sheffield AMRC Training Centre holding a ‘24-hour social media takeover’ to mark the occasion.

Nominations for the awards were made by employers and trainers to recognise the achievement or contribution apprentices have made to industry, and were judged by a panel of AMRC Training Centre staff and award sponsors.

As part of her prize for winning the overall Apprentice of the Year 2020 title, Bethany will be rewarded with a visit to Stanley Black & Decker’s Global Tools & Storage headquarters in Towson, Maryland, USA - when safe to do so - and will have the opportunity of additional training that includes best practice in advanced, innovative subjects such as automation, robotics, additive design and manufacturing.

Bethany, of Sheffield, is excited for what the future holds.

“I can't even get my head around the prize at this stage, for me this is a once in a lifetime opportunity I am so unbelievably excited about,” she said. “I’m hoping for onwards and upwards in the future, continuing to develop my skills and capabilities as an engineer and striving for the best opportunities and achievements that I can reach.”

She is an enormous asset to the Gear Centre team, the wider AMRC and the clients she is undertaking research for and is a highly worthy winner of the Apprentice of the Year award.

Ben Cook, Technical Fellow at the AMRC who leads the Gear Centre research team, said Bethany’s appetite and enthusiasm for engineering is boundless and she is an asset to the AMRC.

He said: “As soon as she joined us as a machinist, she quickly learned how to get the most out of our new machine tools and was soon suggesting methods of enhancing the quality and productivity of the components she was making for us.

“Now, as a project engineer, she undertakes a much broader role including design of experiments, programming, analysis of data and reporting of results to customers and academia.

“Bethany is accomplished in each area and developing further at pace, which shows the great benefit of her apprenticeship background which has given her such a solid foundation in manufacturing science and application.

“She is an enormous asset to the Gear Centre team, the wider AMRC and the clients she is undertaking research for and is a highly worthy winner of the Apprentice of the Year award.”