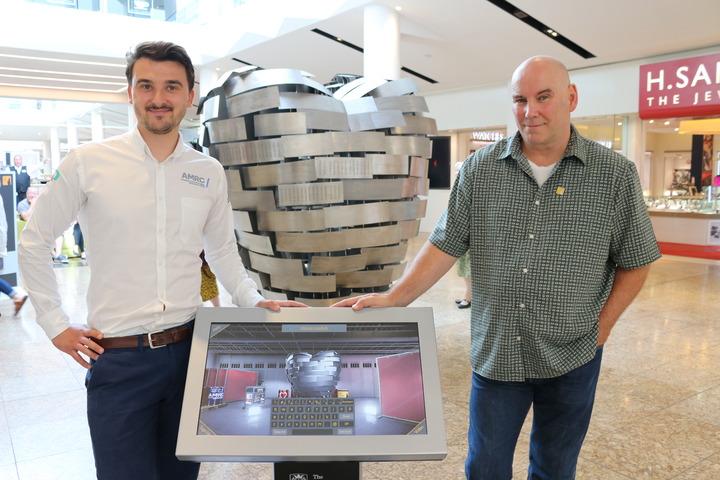 At the heart of advanced manufacturing: The AMRC's Michael Lewis and former steelworker turned sculptor Steve Mehdi try out the Heart of Steel app. 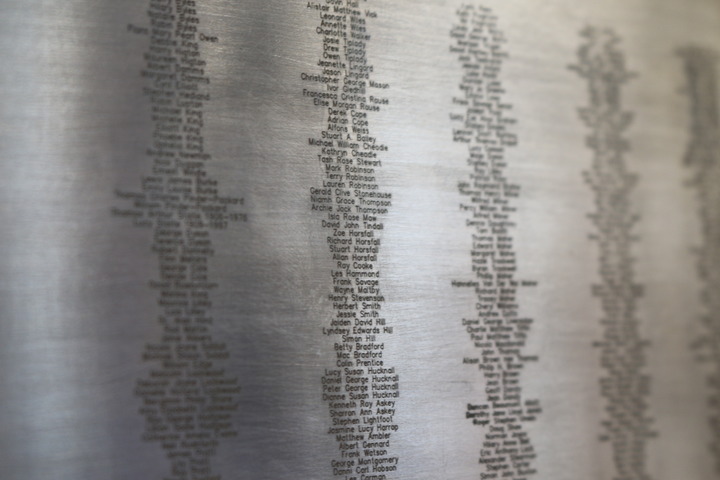 Digital meets heritage: Some of the names engraved on the Heart of Steel which the AMRC is designed to track and find for visitors.
Previous slideNext slide

The University of Sheffield Advanced Manufacturing Research Centre (AMRC) has created a touch screen app to help people find names engraved on a super-sized steel heart on display in Meadowhall.

The heart is destined to sit inside the Steel Man, which will be a soaring 32m landmark sculpture planned for a former landfill site overlooking the M1 and Meadowhall, serving as beacon to honour the people and places behind the area’s steel and coal heritage, and a symbol of the advanced manufacturing sector.

The ‘Heart of Steel’ has been created to raise money to build that landmark sculpture - with people donating to the Steel Man project to have a name etched on to the 2.4m heart, which weighs in at just over one ton.

The team behind the iconic project want visitors to be able to see exactly where those names are engraved so they turned to engineers from the AMRC's Integrated Manufacturing Group (IMG) to develop an interactive, touchscreen app that would let people do just that.

It has been created using the latest games engine technology which, with some clever coding, allows visitors to pinpoint the precise location of a name. It was developed by Michael Lewis, Digitally Assisted Assembly Technical Lead for the IMG, and Charlie Conte, a computer games and programming skills student from Coventry University on a work placement with IMG.

Michael and Charlie flexed their creative muscles to design an app that visually reflects the project’s industrial roots, showing the Heart of Steel dominating a factory floor with blazing welding sparks firing from behind workshop screens that surround the impressive structure, bringing the scene to life for users.

The app has a smart function built in that allows users to view a film about the project and watch some of the emotional heart-wrenching stories from those who donated to the appeal in memory of a loved one. It also lets visitors learn more about the AMRC, the British Heart Foundation and how to engrave a name and make a donation.

Michael said: “The application we have built is tablet-based and sits on a pedestal in front of the heart so a person can come along, type in a name and the app will animate through the heart and zoom in to where that name is engraved on a particular panel so the person knows where it is on the actual heart.

“The way we did this was by getting a 3D CAD model of the heart and importing it into a games engine called Unity and programmed the functionality to tie it to the names and then gave it the ability to animate when you type a name and the intelligence to be able to do that. We have essentially made a mini game.

“A lot of applications we build are done using similar technology – it’s our bread and butter – and the Steel Man team approached us to do it because they understand we are doing these kinds of experiences already.

“As a digital team it’s nice to be involved in something like this. It’s a real opportunity to be creative.

“It’s been a different experience for us because a lot of the stuff we build is for proof of concept projects to prove something works but not necessarily to make it beautiful.

“We’ve worked on the Heart of Steel project to the final completed article and knowing it will be seen by potentially hundreds of thousands of people – we knew it needed to be polished.

“It’s been a really nice challenge to get something production ready.”

The ‘Heart of Steel’ is on display at Meadowhall, outside H Samuel, until the Steel Man is built. The Heart is made from a super alloy called Inconel, a material normally seen in high performance engine parts used in aerospace and Formula One.

It is made up of 135 individual panels set to be engraved with 150,000 names chosen by people who donate to the appeal, with ten per cent of all donations going to the British Heart Foundation to fund lifesaving research.

Steve Mehdi, the former steelworker turned sculptor behind both the Steel Man and the Heart of Steel, is impressed with the app and praised the AMRC for its support in developing the visitor experience.

He said: “The University of Sheffield AMRC is a founder member of the Steel Man project and continues to offer high level expertise and practical help, machining a three-metre model of the Steel Man, and a smaller 3D printed version.

“When we needed an app designing as part of the new fundraising campaign the team at the AMRC’s Factory 2050 stepped in and came up with a brilliant version.

“The Steel Man honours the past but its vision is firmly set on the future. Advances in the new technologies will play an important part in the region's future success, and the skills and innovations developed at the AMRC will be central to the construction phase of The Steel Man.”

The Heart of Steel and the laser engraving of names has been made possible by the support of three Sheffield companies: Maher, which donated the material; Doncasters Bramah, who made the heart; and Pryor Marking Technology which is engraving the names. To find out more about the project visit: http://www.thesteelman.co.uk/heart-of-steel.

AMRC plays key role engineering new world record
21/08/2019
The University of Sheffield’s Advanced Manufacturing Research Centre (AMRC) has …
AMRC becomes part of £60 million bid to explore and improve new manufacturing techniques
15/12/2016
The AMRC has been named a partner in three of the UK’s new Future Manufacturing …
The Integrity of Things
06/08/2019
The proliferation of high-performance, low-power, low-cost single board computers cou …
Global advanced manufacturing conference to chart prospects for significant change in aerospace
30/07/2015
The impact of new materials, technologies and changes in the supply chain wil …