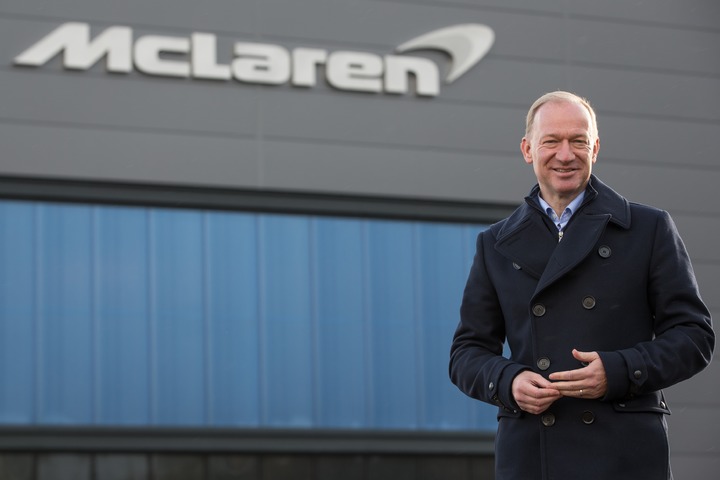 A key milestone was marked yesterday (16 January 2018) at the Yorkshire manufacturing centre that from 2019 will start producing carbon fibre tubs for McLaren Automotive, the British creator of luxury sportscars and supercars.

After a launch at the AMRC's Factory 2050, McLaren Automotive Chief Executive Mike Flewitt was on-hand to illuminate the famous marque’s sign in McLaren Automotive's new manufacturing centre and the recently unveiled McLaren Senna road car performed a series of expertly choregraphed ‘doughnuts’ to leave a trail of fresh Pirelli tyre rubber on the new centre’s floor to ‘christen’ it - McLaren style.

The event provided the first glimpse inside the new composites technology centre which, when open, will be home to McLaren’s second production facility and the first ever outside of its native Woking. Over 40 McLaren employees are already based in Sheffield, housed at the AMRC, where they are working in partnership to deliver a two-year research and development programme that is advancing the process for creating the lightweight carbon fibre Monocage structures at the heart of McLaren cars.

The University of Sheffield’s AMRC Training Centre is also training McLaren apprentices who will work in the new facility.

Find more about McLaren Automotive's partnership with the AMRC.

When fully operational, around 200 people will work at the MCTC, which will supply carbon fibre tubs to the McLaren Production Centre in Surrey where the company’s sportcars and supercars are hand- assembled.

Mike Flewitt, McLaren Automotive Chief Executive said: “Today is an important and exciting milestone for everyone at McLaren Automotive, as well as a personal honour, to officially turn on the McLaren sign at what will be our McLaren Composites Technology Centre when it opens later this year.

“It marks the continued development of the current 2,100 strong company, and will bring new jobs to the Sheffield region which has a proud association with advanced materials; first with steel and now a future to look forward to with carbon fibre innovation and production for McLaren.”

Banking on additive manufacturing
30/04/2019
A bank of powerful 3D printers linked to easy-to-use software has been built by AMRC …
Can IDC team clean up at soapbox race?
24/06/2019
A group of research students at the University of Sheffield Advanced Manufacturing Re …
AMRC helps fund life-saving kit for community
03/04/2019
The University of Sheffield AMRC has helped fund a state-of-the-art, solar powered ch …
MANTRA brings Mars to Mercia
25/04/2019
The AMRC’s MANTRA truck was a fitting backdrop for the local launch of a nation …