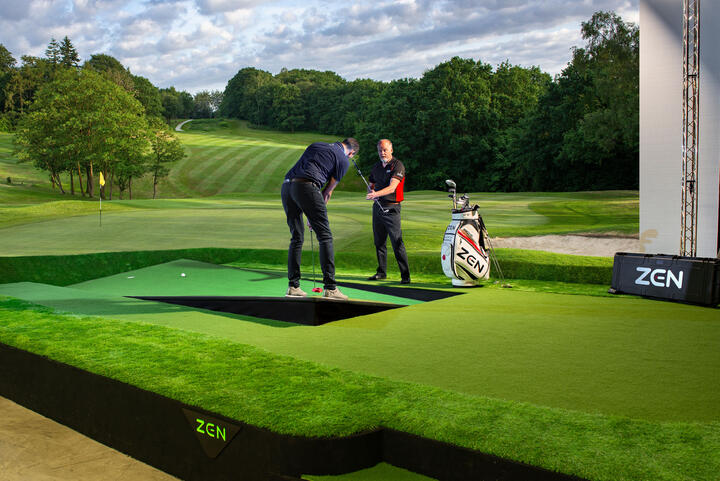 The ‘thoroughbred, highly educated, expert approach’ of the University of Sheffield Advanced Manufacturing Research Centre (AMRC) is helping a South Yorkshire SME to revolutionise how PGA Tour professional golfers practise and how we all watch the game on TV with the world’s first fully adjustable, computer-controlled playing surface.

“Without the AMRC I don’t think we could have reached the point we are at now. It really was that decisive for us; it was a major factor in our business moving forward,” said Zen founder, Nick Middleton.

Zen’s Green Stage accurately simulates the real-world playing conditions found on an undulating golf course, allowing players to practise full swing shots and make putts on sloping lies. Controlled from their phone or tablet, and initially designed for golfers wanting to get into the swing of things at home, the 2020 Zen Green Stage has been used by the Sky Sports Golf presenting team during their studio coverage and will be a key component of their analysis during the PGA Championship at Kiawah Island.

“Working with the AMRC gave us the opportunity to consider the true potential of the Green Stage,” said Nick. “We have the confidence to upscale the business now because we know our control system is resilient, more accurate, quicker to produce and future-proofed with enhanced lifecycle – all after working with the AMRC.”

The joint project between Rotherham-based Zen and the AMRC, part of the High Value Manufacturing (HVM) Catapult, started in 2019 when Nick approached engineers at the AMRC’s flagship Factory 2050 facility with a problem: ‘How do we get to the next level?’.

We were getting into a deeper and darker place, it was a serious impediment to us scaling up the business, and we couldn’t see an end to it any time soon.

Dr Rikki Coles, Technical Lead in Industrial Internet of Things (IIOT) and Edge Computing, says Zen was stuck in a bit of a hole – or should that be bunker?

“Zen recognised their current efforts could be a potential show-stopper and were at a point where they were unable to venture forward and satisfy the demands of this emerging market. In short, they had created the stage but were stuck for action.”

Nick added: “We were getting into a deeper and darker place, it was a serious impediment to us scaling up the business, and we couldn’t see an end to it any time soon.”

Rikki rewrote the closed loop system Zen was using for the stage so they could both future proof the technology and own the full software stack to regain control of the product’s manufacturing process.

Rikki was then able to go further. He said: “Nick really wanted the stage to be self-levelling which would improve installation of the product, but the software and hardware they were previously using wouldn’t allow it to do that. They were having to calibrate the stage manually with a hand-held digital level which was not ideal for remote deployments.”

Zen’s earlier system used external ultrasonic sensors in the corner of the stage to determine its position, but they could sometimes be inaccurate and could be compromised by things like spider webs breaking the path of the ultrasonic beams. Rikki demonstrated that the actuators also had high-accuracy encoders built into them that could be used by the software, which were previously thought to be non-viable, leading to large improvements in the accuracy of the stage’s movement.

“We wouldn’t have been able to add that functionality to the old system because it was so inflexible. The encoders were already there, were no extra cost and were far more accurate; the only reason they hadn’t been used before was because the hardware and software paradigm couldn’t make full use of their potential. We demonstrated their full potential and provided much better value from the same hardware budget,” said Rikki.

“What Zen has now is a system which is both modular and physically scalable; meaning the company can consider much larger stage designs. Their initial design was limited to an actuator on each corner, but now they can plug in as many as they like and because there are no sensors requiring a direct line of sight, the whole thing is more robust. Importantly, they also have complete ownership of the hardware and software and hence the complete manufacturing process.”

Nick says the project with the AMRC, paid for in part using funds from the HVM Catapult as part of its commitment to working with small and medium-sized manufacturers, was incredibly important to the sustainability of Zen at a critical time.

“The project has given us a superior design, a more dependable way of making and delivering it, and a huge amount of confidence to scale up our business. The thoroughbred, highly educated, expert approach of AMRC engineers is undoubtedly something we couldn’t have got anywhere else.”

It’s time for golf to take a quantum leap and embrace artificial intelligence to make people better players. This will be a real game changer.

The Zen Green Stage is now taking the golfing world by storm, with a huge increase in orders since it was unveiled. European Ryder Cup legends Ian Poulter and Tommy Fleetwood have purchased the Stage, with a fast-growing number of Tour golfers in the World’s Top 50 now installing it in their own homes and training studios.

“Last year’s Masters tournament’s delay to November worked in our favour because it allowed us to install a specially customised model of the Zen Green Stage in Sky’s studio. Because of lockdown we had a captive audience,” said Nick. “Proving it in a broadcast setting was invaluable to us because it gave us huge confidence that we had a resilient and trusted product.”

Nick says that combination of Industry 4.0 technologies could transform the game.

“Take the example of chess - it’s because of computers and machine learning that chess players have ultimately become better,” he said. “It’s time for golf to take a quantum leap and embrace artificial intelligence to make people better players. This will be a real game changer.”