Racing cars, robots and the future of engineering 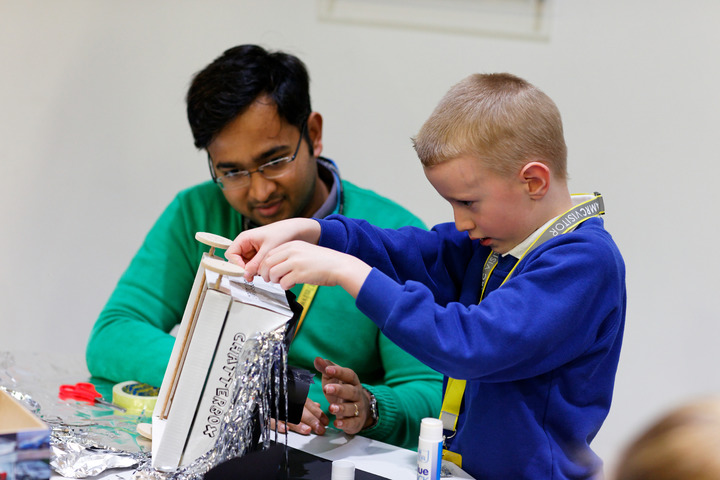 Racing cars and robots are taking over the Advanced Manufacturing Research Centre (AMRC) for the Primary Engineer celebration to recognise the region’s budding young engineers.

The University of Sheffield AMRC teamed up with a national not-for-profit organisation Primary Engineer last year to develop local teachers’ engineering skills and inspire children to see themselves as the problem-solvers and innovators of the future.

This saw teachers from across the Sheffield City Region partnered by engineers from the AMRC and, through the Primary Engineer and Secondary Engineer training programmes, shown how to deliver activities that bring engineering to life in the classroom.

Since the launch at the AMRC Training Centre last November, enthusiastic pupils from 13 primary schools have been busy designing and building racing cars that they will put to the test at a special celebration event at the AMRC on July 2. The youngsters made cars out of shoe boxes and, depending on their age, built their own chassis with an electric motor and gearing system. Each pupil had to use their creativity and imaginations to design the car and construct it using simple tools like saws and drills.

A Secondary Engineer celebration will follow with pupils from four city region secondary schools descending on the AMRC, part of the High Value Manufacturing Catapult, to put their hydraulic-powered robotic arm creations through their paces.

The support of the AMRC Training Centre, part of the AMRC Group, has been pivotal in the Primary Engineer programme, cementing its commitment to developing and nurturing the ambitions of future engineers.

Director of the AMRC Training Centre, Nikki Jones, said it has been a real privilege to work with Primary Engineer to inspire a pipeline of next generation engineering talent.

“The AMRC is very much looking forward to hosting the celebration event and seeing how taking engineering into classrooms has made a real impact to capture the imaginations of the region’s young people and give them an understanding of what it means to be an engineer.” Each school has worked with the AMRC for engineering support and guidance as well as having a direct link to an engineer. Jack Forrest, from the AMRC STEM and Outreach team, said:  “The engineers have gone to schools to support sessions, run workshops, give assemblies and generally be helpful, hands-on and supportive.

“The celebration event on July 2 will look at the best models each school puts forward, interview the students to judge their design and creativity and let the pupils put their cars through either a downhill or uphill challenge.

“Depending on their age they will be judged on how far and how straight their car travels when it is launched from the ramp. The uphill task will involve students having embedded electronics, gearing and friction into their design in order to pull the car up an incline when they activate the switch.”

Secondary school learners were tasked with designing and building pick-and-place robots that are powered using hydraulic systems. To fire up imaginations, the pupils were shown examples of hydraulic structures that can bring about movement in each dimension and used these as inspiration to design their own robot arm that can grab, lift, move and release items.

“Each robot has been built from scratch using saws, drills, glue guns, lengths of wood, dowels, tubing and syringes,” says Jack. “The pupils will be presenting their designs to a panel of judges and be interviewed. They will then have to demonstrate the capabilities of their robot by competing against robots from other schools by moving cylinders onto platforms with areas marked for different scores, depending on the level of difficulty.”

Presentations will be made at the end of the primary and secondary school challenges and judges will hand out ribbons and medals to the best teams. The day culminates with a Leaders Award celebration to announce winners of a competition that challenged schoolchildren from across Yorkshire and the Humber to answer the question: ‘If you were an engineer what would you do?’

Pupils had to identify a real-world problem, design a solution and write a letter to an engineer saying why they should make it. More than 2,220 entries were submitted from 16 schools across the county attempting to solve a whole range of challenges from inventions to support people with dementia, solving global warming and climate change to machines that feed your pets.

Shortlisted designs have been judged by an impressive panel of experts including AMRC CEO Colin Sirett, AMRC engineers and trainers, and Shivan Morkar who is the AMRC Training Centre Apprentice of the Year 2019 champion.

From the shortlisted entries, two victors are chosen from each year group along with the winner whose design will be prototyped by the AMRC.

An exhibition of entries from all the participating schools will be held at the AMRC Training Centre on July 3, which is open to the public and free to attend. For more information about the event visit: www.amrctraining.co.uk/event-details/primary-engineer-leaders-award-exhibition. To learn more about Primary Engineer and its programmes, visit: www.primaryengineer.com.

Jewel in the crown
17/06/2020
A watch-style bracelet made from ‘space glass’ that has a custom, uncut d …
Keeping the space industry at the cutting edge
03/08/2020
Composite engineers at the University of Sheffield AMRC were singled out for praise b …
AMRC Training Centre praised by new employment and skills study
26/09/2014
The work of the University of Sheffield's AMRC Training Centre is highlighted in a …
University of Sheffield partners with GKN Aerospace to boost new digital technologies in aerospace manufacturing with £32 million centre
06/12/2018
GKN Aerospace's new Global Technology Centre announced today by Greg Clark MP, Secr …