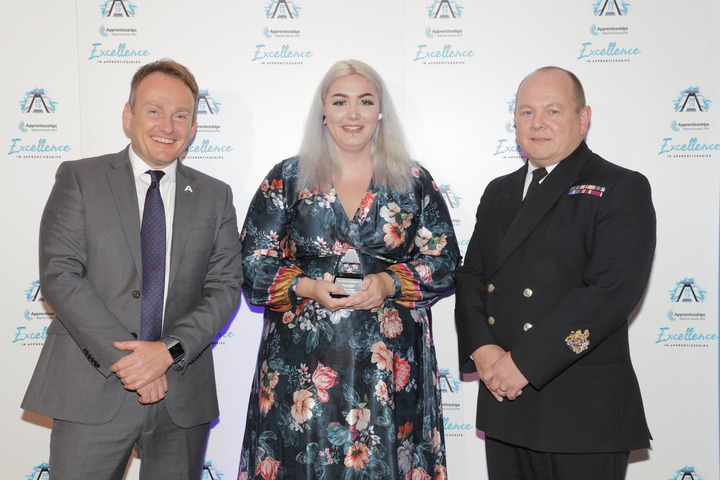 Anthony Knowles, head of national accounts (North) at the National Apprenticeship Service; Rebecca Wright, with her Royal Navy Award for the Advanced Apprentice of the Year; Warrant Officer Mark Thomas from The Royal Navy.

A self-confessed teenage tearaway who turned her life around with an engineering apprenticeship has made the finals of the National Apprenticeship Awards.

Ambition, aspiration and confidence were not words that featured heavily in 20-year-old Rebecca Wright’s vocabulary. But it is those precise qualities which have seen her sail through the rigorous judging process to be crowned a regional winner and national finalist.

At the Yorkshire and Humber regional ceremony in Leeds, Rebecca was named winner in the Advanced Apprentice of the Year category, which recognises exceptional contribution to a workplace. She will now compete for the national award in November.

Rebecca, from Sheffield, who is in the second year of a technical support apprenticeship at the AMRC Training Centre, is employed by the University of Sheffield AMRC’s Integrated Manufacturing Group (IMG) based at Factory 2050.

She was sunbathing on a beach in the Caribbean and enjoying a cocktail when she found out about her nomination.

“I couldn’t quite believe it when I found out,” said Rebecca, who during her school years was told she would ‘never get anywhere’ looking like she does with her colourful hair and piercings.

Rebecca’s main focus at IMG is computer-aided design, business improvements and maintenance in the workshop. She also manages the 3D printer to ensure everything operates efficiently which prolongs the life of the machine.

Her work to improve the efficiency of the Factory 2050 workshop has already yielded results. She said: “I was tasked to improve workshop productivity by implementing ‘5S’ lean manufacturing into the workshop, this has improved the average cleaning time by 13 minutes each week which increases working time.” When asked about what it meant to win, she said: “It’s so strange for me being noticed like this because I’m not used to it. I never got on well with education; I got kicked out of a lot of lessons at school and was a bit of a rebel.

“I did go to college to do art and design but that way of learning just wasn’t for me. Then I worked in a chippy, got a job in a shop and a call centre; I didn’t know what I wanted to do.

“It was when I met my boyfriend that things changed. He’d been to the AMRC Training Centre and that’s when I looked into an engineering apprenticeship.”

With support from the training centre, Rebecca secured a place with the Integrated Manufacturing Group at Factory 2050, the place where digital meets manufacturing.

“My apprenticeship has changed my life so much,” she said. “The confidence it has given me has made a big difference; my dad said I was always that little girl who was too scared to talk to the shop keeper and now I’ll talk to anyone.

“I came into the job with knowledge and skills because of my training at the AMRC Training Centre and my mentor, IMG project engineer James Lindsay, has taught me a lot too and given me projects. At first I did a lot of shadowing with him but now the reins are off and he wants me to be independent but to know he’s there if I need any support.

“My apprenticeship has given me ambition and aspiration and made me realise there’s a lot of opportunities here. I would really like to progress and go on to do a degree.” James Lindsay, IMG project engineer, said Rebecca is a very worthy winner: “We are all incredibly proud of her and what she’s achieved. She has the right attitude, passion and commitment we value.

“Rebecca has completed a wide variety projects since she started at the AMRC, covering mechanical interface designs, controls cabinet builds and machine vision programming. Her have-a-go attitude has allowed her to confidently perform tasks she thought were beyond her capabilities.

“A diverse skill set is exactly what is required from any engineer within IMG and Rebecca is proving she has a hunger for further development. She’s not just an apprentice to us, she’s an integral part of IMG and the wider team, particularly through her work with Women in Engineering and being a first class ambassador for the AMRC. She deserves every ounce of recognition she receives.”

Rebecca isn’t the only AMRC Training Centre apprentice to reach the regional finals – Oliver Marsh, a process technician among the first to complete a higher apprenticeship scheme at the training centre, also made the cut in 2018 and made it to the national finals.

“The regional stages of the competition is an exciting time for employers, apprentices, individuals and stakeholders who all recognise the importance of skills to help our economy to thrive and grow locally, regionally and nationally,” he said.

“Congratulations to everyone involved in the regional ceremonies – the winners, those that were highly commended, sponsors and hosts. I know judges had a difficult time selecting winners – the depth and breadth of applications was astonishing and I look forward to seeing who wins across the English regions.”

The national ceremony will be held on Wednesday 27th November.

For more information on an apprenticeship with the AMRC Training Centre, visit: www.amrctraining.co.uk/apprenticeships

Partnership to explore innovation barriers faced by SMEs
09/11/2018
A collaborative research project between the AMRC and Sheffield University Management …
Leading manufacturers into the new normal
19/06/2020
A blueprint for safe, productive working by manufacturers during Covid-19 will give t …
Smart, sustainable homes for the future
25/08/2020
Robotics, vision inspection and augmented reality technologies are being harnessed to …
Business Minister sees innovation and enterprise at AMRC Cymru
21/02/2020
The Minister for Business and Industry says technologies being developed by the Unive …