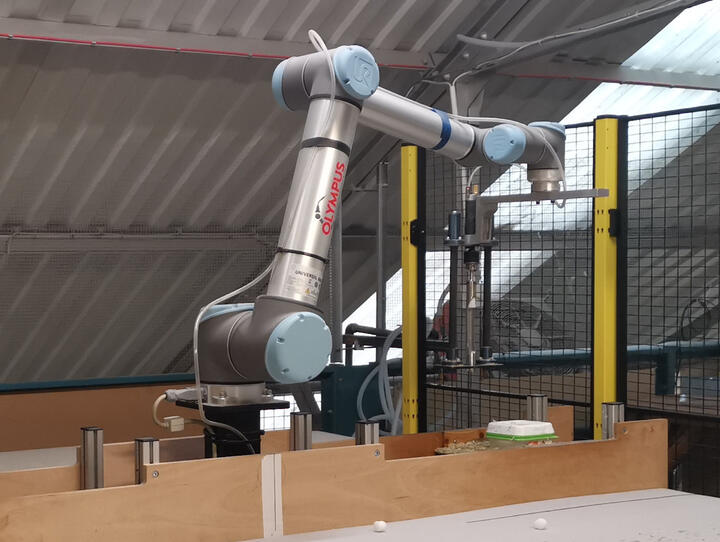 Fibreline is now utilising robotics and automation in its production process after working with the AMRC and Olympus Technologies.

A family-run furniture maker has become an industry leader with the help of digital manufacturing experts at the University of Sheffield AMRC who proved that robotics and automation technologies could increase capacity and improve productivity in its production process.

“It is something no one else in our industry has ever done and has given us a competitive advantage in the marketplace,” said Richard Prudhoe, Managing Director of Fibreline, which is the largest independent cushion manufacturer in the UK. “We have now become the supplier of first choice because of our productivity, consistent quality, and our new capacity to do a large range and volume.”

The Keighley-based business, which was founded in 1982 and employs about 200 workers, supplies bespoke cushion fillings for up to 4,000 sofas every week. Fibreline is a high-volume, low-margin manufacturer with extremely short lead times.

Richard said: “We recognised some time ago that our processes had significant potential for improvement and have looked into automation in the past to remove labour from our production, but we quickly exhausted the obvious options. Commercial solutions were committed to large volumes of the same product and we just weren’t like that – we needed to find a solution to enable us to do small batches of a huge variety.”

Fibreline asked the University of Sheffield Advanced Manufacturing Research Centre (AMRC) to investigate whether two of its labour-intensive processes could be fully automated: the drilling of buttonholes in pieces of foam and the process of spraying adhesive glue to products on the assembly line. The AMRC is part of the High Value Manufacturing (HVM) Catapult network of research centres and the project was paid for in part using funds from the HVM Catapult as part of a commitment to working with small and medium-sized businesses.

We have now become the supplier of first choice because of our productivity, consistent quality, and our new capacity to do a large range and volume.

Richard said they had made some progress themselves with a low-cost universal robot and an automatically generated drilling program, but it still required a robot programmer and an operator to set the parts in a fixed position.

“We started thinking that a vision inspection system could be used, but that took us into an area in which we were completely unfamiliar. That is why we approached the AMRC,” said Richard.

“Fibreline had this concept of using a vision inspection system but they just didn’t know if it was feasible because there were so many unknowns: the success, the cost and the space it would take up. Doing this project allowed us to take all of the risk out of the potential investment,” said Dr Phil Yates, Project Manager at Factory 2050.

For the drilling process, Fibreline wanted to determine whether camera technology could remove the need for a fixed datum point, recognise different parts to be drilled and create a process that didn’t require a part to be in the exact same position each time. For the gluing process, the company wanted to use the camera recognition software to automate the generation of the spray path around the edges of the shape being glued. “Fibreline sent a selection of their foam products to Factory 2050 and then we set up a demonstrator using one of our existing universal robots and a camera we had on site. The key was conducting trials with the camera to find the right specification, which we were able to do,” said Dr Yates.

Richard said: “For the gluing process, the AMRC proved that certain elements of the project were feasible, but also identified issues that it could not solve. The second document was a full specification for a drilling cell using camera technology with a detailed description of how the process would work, the equipment required and the hardware we would need.

“Although the two documents had different conclusions, both were as valuable to us as each other. The first allowed us to confidently discount the technology for gluing and pursue another solution while the second document gave us the assurance we needed to go ahead with the investment for the installation.

“Simply, the AMRC de-risked the projects and saved us precious time and wasted money pursuing something that wasn’t viable. Additionally, the AMRC engineers helped us identify commercially available solutions to the manufacturing challenges we faced.”

Crucially for us, the leading-edge project had been de-risked by the AMRC. Without that, we may have been reluctant to take on the project.

Fibreline and the AMRC passed the report and drilling specification to robot integrator Olympus Technologies in Huddersfield, one of Fibreline’s existing suppliers. Director, Adam Swallow, said: “We used the output from a 21-megapixel Keyence camera, mounted above a turntable, to modify the Octopuz offline programming software drilling path, based on the actual position of the foam, giving Fibreline a fully optimised process.

“Crucially for us, the leading-edge project had been de-risked by the AMRC, who had largely proved the concept. This gave us the confidence to implement the project for Fibreline. Without that, we may have been reluctant to take on the project.”

Richard said the drilling cell has been in operation for more than a year and he is incredibly happy with the result.

“The AMRC brought a skillset we simply didn’t have. We had pushed our limits by using a universal robot and camera technology wasn’t something we had any experience of. The project has increased our capacity and improved our productivity, and we’re incredibly pleased with the result.”

From couture to composites: spinning a high-tech yarn
22/04/2021
Fabric producer Antich and Sons has achieved a step change in its manufacturing capab …
HVM Catapult: Leading the green manufacturing revolution
08/07/2020
The High Value Manufacturing (HVM) Catapult has published its annual review capturing …
Food and Drink Federation announced as AMRC Cymru partner
02/11/2020
Food and Drink Federation (FDF) Cymru, the organisation that represents Welsh food an …
New scheme helps small firms tap into AMRC expertise and grow
18/06/2015
Small firms wanting to grow, but worried about the cost and resources that would be t …