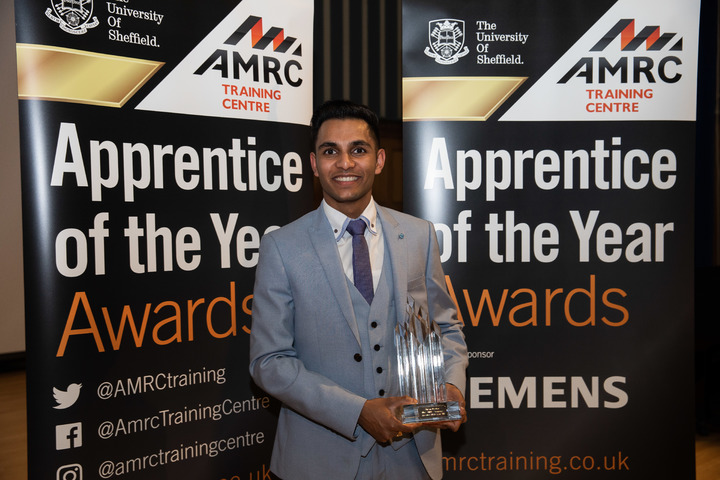 Apprentice of the Year 2019, Shivan Morkar of William Cook Rail.

Innovation, passion and bringing fresh thinking into the workplace are some of the qualities that won Shivan Morkar the honour of being named ‘Apprentice of the Year’ at the Advanced Manufacturing Research Centre (AMRC) Training Centre annual awards ceremony.

The event, supported by Siemens and set against the stunning backdrop of the University of Sheffield’s Firth Court Hall on March 1, is now in its fifth year, attracting the great and good from industry, business and public office across the Sheffield City Region and beyond.

As part of the prize for winning the Siemens-sponsored 'Apprentice of the Year 2019' award, Shivan, a CNC machinist for William Cook Rail in Leeds, will travel to Germany to visit Siemens’ award-winning Industry 4.0 Smart Factory in Amberg. Nominations for the annual awards are made by employers and trainers to recognise the achievement or contribution apprentices have made to industry, and are judged by a panel of AMRC Training Centre staff and award sponsors.

This year, the judges said they had been overwhelmed by Shivan’s enthusiasm and passion for industry, the positive impact he’s had on his workplace, and that he has become an inspiration for other apprentices and work colleagues around him.

On accepting the award, Shivan, 21, who is in the first year of his degree apprenticeship, said the win is a massive boost in confidence and ‘a great feeling’ knowing his hard work has earned him such recognition.

He said: “This means everything to me. I wasn’t expecting it at all - thank you to everyone who has supported to me. That support has been very important, it has pushed and helped me to do to more and keep on progressing.”

Shivan, of Bradford, said one of the main highlights of his year was being given the opportunity to go to a McLaren Automotive press conference announcing its partnership with the AMRC because he got to sit inside three of their impressive supercars. Another high note was being involved in a project where he had to work with a company to manufacture a team of table top football players – all while still in his early days of learning about CNC machining.

Phil Mosley, machine shop manager at William Cook Rail, was at the awards ceremony to see Shivan lift the trophy.

“It is very well deserved. Shivan’s hard work, effort and motivation are unbelievable and just for him to take it to the level he has, getting his Level 3 so far ahead of schedule, shows every bit of enthusiasm and that he is keen to learn,” he said. “Shivan has a very bright future ahead of him and will go all the way.” Other winners at this year’s awards were:

Outstanding contribution awards sponsored by the AMRC Training Centre were given to lecturer Itai Vutabwarova for the impact his teaching has had on apprentices’ achievements, and to Sarah Hudson for ‘going above and beyond’ in her support staff duties, giving invaluable support to the centre. Director of the AMRC Training Centre, Nikki Jones, said it was a fantastic evening and that she was proud of each and every one of the apprentices.

“This is an evening when we embrace the future; when we look with great pride on the well-rounded, articulate, passionate young people whose energy and drive will see them rise to the very top in their chosen companies,” she said.

“The halls of Firth Court echoed to loud applause as the older generation handed the baton to the younger generation, confident in the knowledge that manufacturing and engineering, the heart and soul of our region, are in safe hands and guided by smart brains.”

Professor Keith Ridgway, Executive Dean of the AMRC, said: “The pride we feel in what our apprentices have achieved – and of how much further they can go with the knowledge and skills they have acquired – is what inspires and motivates us to do more.

“The success of the AMRC Training Centre is a collaborative effort involving industry partners, government and a civic university publicly committed to expanding alternative learning pathways, widening access and deepening participation among groups of people who might otherwise be left behind.” On the evening Lord Blunkett, former Education Secretary, said: “The achievements we celebrated here tonight are a testimony both to the talent and tenacity of the young apprentices and to the ambition of their employers who have made the commitment to invest in their people. But it also a time of reflection; what we saw here tonight is a region building on its historic strengths in engineering and manufacturing and using these skills and this history to chart a better future.”

University of Sheffield Vice President for Education, Wyn Morgan, added: “This evening was a wonderful celebration of the hard work and effort our apprentices have made and recognises the vital role they play in driving innovation in their companies and the wider region.”

Immersed in Europe, on track in Manchester
11/04/2019
A stellar gathering of Europe’s leading players in the creative, gaming and art …
Major changes as fast growing research centre plans for further expansion at home and abroad
30/11/2015
The University of Sheffield Advanced Manufacturing Centre is gearing up for further g …
UK joins hands with Canada to do the Salsa
19/11/2019
The AMRC has joined forces with a UK tech start-up and a global engineering giant in …
Manufacturing a new safety culture at the AMRC
26/03/2021
The University of Sheffield Advanced Manufacturing Research Centre (AMRC) has appoint …