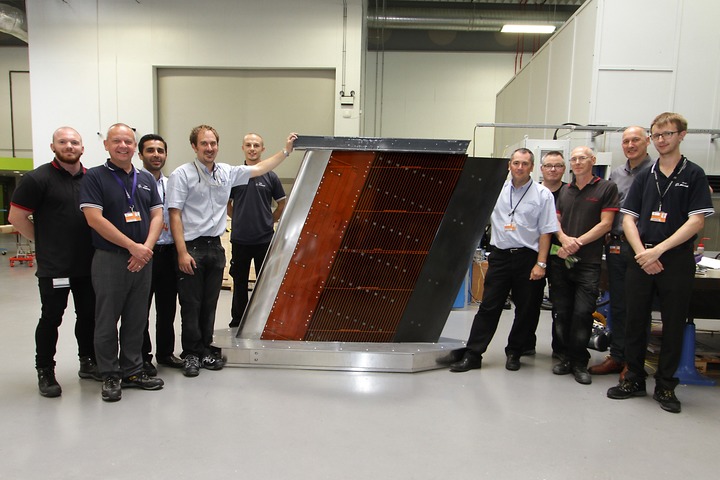 Members of the AMRC who collaborated on the ELWIPS project with the composite wing structure demonstrator.

A £1 million-plus project to develop “smart” composite leading edges for aircraft wings with embedded heaters to protect the wings against ice build-up, while reducing weight and boosting efficiency compared to existing systems has concluded successfully after crucial wind tunnel tests.

ELWIPS - the Electro-thermal Laminar Wing Ice Protection System Demonstrator - is a programme managed by aircraft manufacturer Dassault Aviation. ELWIPS, along with other innovative research programmes aim to develop technologies which will feed into their next generation of aircraft.

The AMRC designed and built a composite wing structure which incorporates innovative electric heating technology and power control systems developed by Meggitt subsidiaries in the UK and France, while world leaders in icing prevention and prediction, AeroTex, determined the sizing, zoning, power rating and control strategy for the heaters.

A section of wing incorporating the technology was sent to the United States, where it recently completed tests in a special wind tunnel operated by the US air and space agency, NASA, which can cause icing and measure its effect on the wing’s aerodynamics.

“The whole development process has taught us a tremendous amount and generated a lot of data that will be very useful in future projects,” said Dr Tim Swait, Technical Lead at the AMRC Composite Centre.

“The heating technology developed by Meggitt is very impressive and has great commercial potential. Tests in the NASA wind tunnel showed it could prevent ice from forming in the first place and would also shed ice if it was allowed to form on the wing.

“If the system is developed commercially it will be a major step forward for lighter aircraft and could have implications for the construction of greener large commercial aircraft.”

A number of different systems are currently used to protect aircraft against icing, which can drastically affect wing aerodynamics and has led to crashes in the past.

One common system for jet airliners bleeds hot air from the aircraft engine and routes it along ducts in the leading edges, while another, seen on turboprop regional airliners and utility aircraft, uses rubber “boots” on the leading edges which can be inflated to force ice off.

Both systems add weight and complexity to aircraft, while bleeding air from jet engines reduces their efficiency and in some circumstances boots have been known to fail, causing crashes.

“You only actually need icing protection on a limited number of flights and for typically short periods of time, so you are carrying all that extra weight for no reason a lot of the time and aircraft of the future won’t be able to use bleed air, since manufacturers are optimising their engines to extract every last bit of performance,” says Dr Swait.

Electric heating has been difficult to implement on smaller aircraft because systems currently require substantial amounts of power.

The ELWIPS project solves that problem by only using power when and where it is needed, instead of heating the leading edge of the whole wing.

“A pure electrical system will save weight and allow the wing’s leading edge to be composite rather than metallic, removing the need for ribs, spars and fasteners and reducing weight further. The system will be more reliable, allow the engines to run more efficiently and allow designers to improve laminar airflow over the wing, increasing efficiency even further,” adds Dr Swait.

Composites Machining
01/09/2016
Date: 21st September 2016As industries such as aerospace, automotive and renewabl …
Automation makes the cut for Powertherm
21/04/2020
An insulation jacket manufacturer with an appetite for digitalisation has ramped up i …
AMRC Composite Centre wins funding to help keep UK at forefront of automotive innovation
26/01/2017
The Composite Centre of the University of Sheffield Advanced Manufacturing Resea …
Getting the measure with fast and accurate data
08/01/2019
A 3D-permeability measurement bench that provides accurate data and fast processing o …