Exciting future for AMRC Cymru as it marks first year 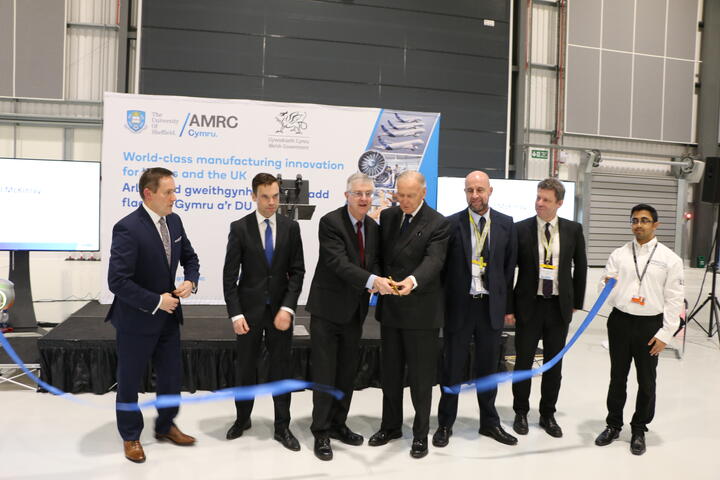 The University of Sheffield AMRC Cymru in Broughton is looking ahead to an exciting future according to Minister for Economy and North Wales, Ken Skates, as it marks the first anniversary since it opened for business.

The state-of-the-art centre, which was fully funded with £20m from the Welsh Government and is managed by the University of Sheffield, focuses on advanced manufacturing sectors including aerospace, automotive, nuclear and food. It is predicted the new facility could increase GVA to the Welsh economy by as much as £4 billion over the next 20 years.

This year AMRC Cymru played a crucial role in the manufacture of ventilators in response to the Covid-19 pandemic.  Airbus workers were redeployed as part of the VentilatorChallengeUK consortium of UK industrial, technology and engineering businesses which produced 13,437 ventilators for the NHS in record time.

Engineers at AMRC Cymru, part of the High Value Manufacturing (HVM) Catapult, have also worked with Food and Drink Wales to produce a guide for safe productive manufacturing during the pandemic for the food and drink industry, building on experiences gained during the ventilator production.

AMRC Cymru will also be establishing a Food and Drink Packaging Sustainability Centre in Broughton following a grant award of £2m from the Welsh Government.  As well as prototyping and providing functional test equipment for new packaging, the Centre will demonstrate the AMRC’s capabilities in advanced automation, collaborative robotics and visualisation.  It is also working with the Welsh Government innovation department on a number of pilot projects to introduce cutting edge technology into the manufacturing sector. Airbus, AMRC Cymru’s first anchor tenant, is continuing with the development of the Wing of Tomorrow programme at the centre following the pause to produce the ventilators.   Wing of Tomorrow is Airbus’ largest research and technology programme taking place globally.  It is a global partnership with the entire industry to develop and demonstrate the physical technology and digital capability needed to deliver the next generation of aircraft wing.  In 2021, a major Wing of Tomorrow deliverable – to manufacture a 17 metre wing box demonstrator – will be realised.

Minister for Economy and North Wales Ken Skates said: “We funded this centre because we knew it could be a game-changer for the region. In this unprecedented and difficult year it rose to the challenge of rapidly manufacturing ventilators with its anchor tenant Airbus.

“This is a very challenging and difficult time for manufacturing.  When I attended the official opening of the AMRC Cymru a year ago we could not have foreseen what would have happened in 2020.  But what is certain is that the establishment of AMRC Cymru gives hope and strength for the manufacturing sector in North Wales and further afield as it looks to the future.

“I look forward to exciting developments here in the months and years to come which will help manufacturing recover from the significant effects of the pandemic.” Research Director at AMRC Cymru, Andy Silcox, said: “The entire team at AMRC Cymru was incredibly proud to be part of the national effort to produce life-saving ventilators, but our attention now is firmly back on helping manufacturers make step-changes in their manufacturing processes by de-risking innovation.

“The technologies we have at our disposal allowed us to pivot our operation to become a ventilator production facility and quickly adapt to a new way of working. Now we want to demonstrate to companies across Wales and cross-border how those same technologies can make a real impact on the way businesses operate.”

Airbus Senior Vice President Katherine Bennett CBE said: "Airbus was immensely proud to play its part in the Ventilator Challenge UK consortium that answered the government's call to produce 13,500 ventilators for the NHS in record time.

"It is testament to our talented employees at Broughton - with the help of colleagues at Siemens, Ford and McLaren - that they were able to use their engineering expertise to rise to this challenge. It is this expertise that will enable Airbus to succeed in its biggest research project - the Wing of Tomorrow - at this cutting-edge Welsh Government research facility in Broughton."

AMRC to build Factory 2050
06/06/2013
The University of Sheffield AMRC with Boeing has secured funding for a £43 mill …
The future is electric: new hub launched to increase electrification in UK manufacturing
12/02/2019
£28 million pound investment, underpinned by a £10m award from the EP …
Former Nuclear AMRC Chief Technology Officer returns to his roots and joins the AMRC
14/02/2017
Former Nuclear AMRC Chief Technology Officer, Stuart Dawson has joined the University …
Digital manufacturing experts help IT firm boost productivity and reduce waste
18/05/2022
A Burnley-based IT business has received a boost in ‘confidence and financial s …